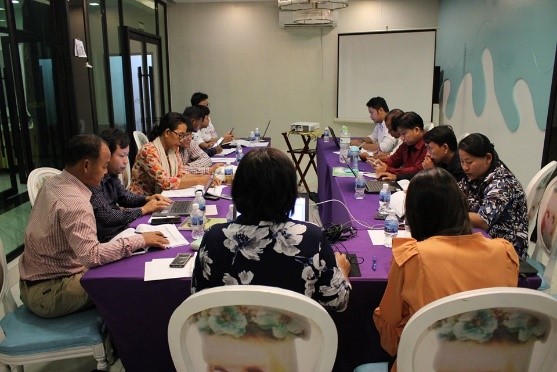 Macroeconomic Framework indicators 2016-2020 show that the international reserve will be afforded for six months. The second committee of national assembly raised a concern related to the macroeconomic framework. MoEF will share it to all ministries to prepare the budget.
What should we know to contribute to the development of the country?

From May to December 2019, the project call strengthening the capacity of CSO in monitoring the government policy in Siem Reap, Kampong Thom, and Prey Veng province. 45 NGOs in three provinces. 45 CBOs including youth and women group, 15 districts in three provinces.

Role of the CSDGs
CSDG will be reflected in every two years. VNR was reviewed in July every year. MoP presented in New York.

Action plan has been developed and presented in the following:
• Organize a meeting to disseminate CSDGs with provincial network members and relevant authorities.
• Organize monthly meeting.
• Training on video and website development.
• Develop a website for supporting the network.
• Provide award for a champion in developing video.
• Support the operation of the network.

Mr. Bunly will consolidate all the action plan and budget from three respective provinces and prepare and cooperative agreement for implementation in the next five months.