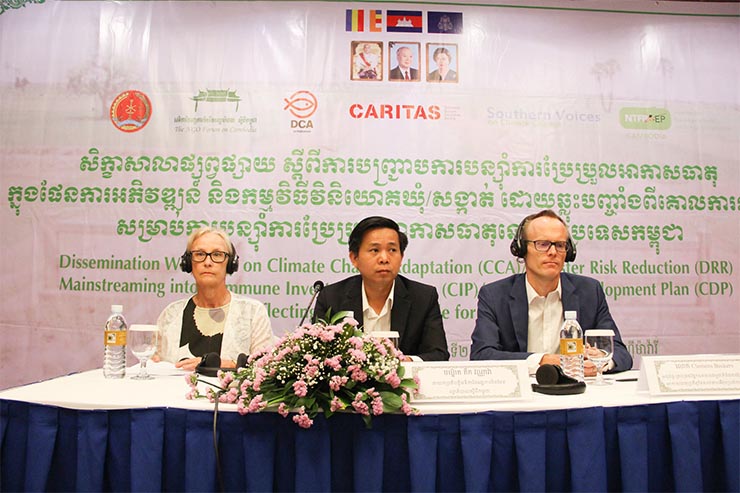 Cambodia is an agricultural country which is highly vulnerable to the impact of climate change, and the human system of its country have been affected by extreme climate events such as flood and drought Climate change is the real challenge for the country, and the economy and livelihood are interfered by its effects in which frequently occurs in the country. Due to its low adaptive capacity in adapting to climate change effects and high dependency on climate-sensitive sectors of rural people, Cambodia becomes vulnerable to climate change

Dr. Tek Vannara, Executive Director at the NGO Forum on Cambodia said in a speech that as Cambodia is an agricultural country, it is highly vulnerable to the impact of climate change.

“While there were many major positive improvement of the government’s efforts, this paper also found some shortage of funding at the commune level, which does not completely correspond to the Commune Investment and Development programme. Cambodians still have a very low understanding of the risks associated with climate change, as well as how they will adapt to inevitable climate changes that impact their lives. As weather is becoming increasingly erratic due to climate changes, actions plans at the commune level are still lacking in how to respond to the changes. We will be better at adapting to climate change with more of the national budget directed towards the sub-national level,” he said.

He added that currently the system of adapting capacity to the impact of climate change of the people is low…to reduce the risk that Cambodia is facing, especially with children and vulnerable groups, the government should offer a higher budget to communes and Sangkats, so they can invest that money in an area to help them manage and adapt to climate change.”

In plenary discussion, Ms. Chhoeun Sody, Chief of Sangkran Roy forest community locates in Siem Reap province’s Varin district, said like other communities, it’s hard for them to adapt to irregular rain, strong winds, floods and drought…in the past the commune authority could not help them with these challenges as they did not have adequate resources.

“I want to see the flow of the commune and district budget to the locals in remote areas. People never receive information on natural disasters and relevant authorities should visit and educate them about the climate change issue,” she said.

Mr. Va Vuthy, representative of National Council for Sustainable Development said this issue and its impacts of climate change is interlinked with development works, which is very happening currently. The government’s income is very limited and every sector is in need of money…however the government has increased the commune budget frequently for such issues.

Dr. Sophat said there are some progress at ground yet we need to do more to improve such as strengthen the existing policies and strategies, capacity building in order mainstreaming CCA/DRR through implementing CDP and CIP from National Government and Non-Governmental Organization as well as improved application of Joint Principles for Adaptation (JPA) at community.

To deal these challenges, Mr. Vorn Savuth said NCDD through The Local Governments and Climate Change (LGCC) were designed to support the capacity of the Local Government to implement Climate Change Adaptation (CCA) to increase the resilience at the local level. Phase I and Phase II of the project, with support from the EU, Cambodia Climate Change Alliance Trust Fund (CCCA-TF) and SIDA, resulted in the LGCC’s demonstration that the Performance-Based Grant Mechanism (PBCRG) has increased the government capacity to produce the local infrastructure, which contributed to the increase of the resilience of their community to the climate change effects in their area. He said “for years of experience in implementing the programme, LGCC has enhanced the mechanism and improved the capacity of the local government, at the same time it also influenced the policy in mainstreaming CCA into the local government planning and also the role of local government in implementing the CCA. The new guideline of the local government planning was approved in the beginning of the year, where the climate change intervention will be a part of the normal development planning—for example SRL project”

Key Note Address by Ms. Johanna Palmberg, Counselor, Governance and Climate Change, Embassy of Sweden and Mr. Clemens Beckers, a representative of the EU’s Cambodian office, said they are working to reduce the impact of climate change in Cambodia. Sweden and the EU are partners in the support of the CCCA. Sweden also supports climate change at local level through its support to the ForumSyd.