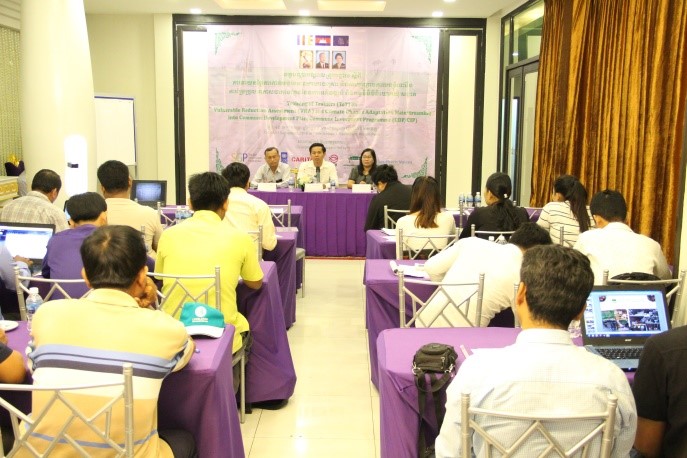 There are another 38 CSO members and partners from NGOs Environment and Climate Change Alliance (NECA) of The NGO Forum on Cambodia (NGOF) and Cambodia Climate Change Network (CCCN) together in aiming 1) build capacity of NGOs/CBOs which are NECA and CCCN members to be able to conduct VRA training to other NGOs/CBOs and key stakeholders who are need it. 2) build strong network and to share experiences on how to designed good CBA project concept/ proposal and mainstreaming climate change adaptation priorities into CDP/CIPand 3) get more understanding on CDP/CIP formulation process. In order to deep understanding, we at last day of workshop had an outdoor field practice the VRA tools for climate change mainstreaming into CIP/CDP. This activity has conducted with different group such as Women Group, Men Group and Local Authorities Group of Seang Khveang Commune, Kamchay Mear District, Prey Veng province. This ToT conducted from 19-21 September 2018

In opening session, Dr. Tek Vannara; NGOF Executive Director that “this three days has been facilitated by NECA of The NGO Forum on Cambodia (NGOF) with supported from SGP GEF UNDP, NCDD, DCA, Caritas Switzerland, and Southern Voice, and refer to what we have been agreed in late 2016 in CSO advocacy strategies aim to more engaging to The Royal Government of Cambodia (RGC) commits to integrating CCA with appropriate financial support in the CDP/CIP by ensuring the community participation in the CCA planning process. With expected that 60% of NECA’s target areas integrate CCA into the CDP/CIP with community participation and appropriate financial support.

He also highlighted that Climate Change is real…Cambodia’s vulnerability to climate change is widely regarded to be due to its poor adaptive capacity and coping knowledge’s at national and sub-national. Around 80% of the population lives in rural areas with poor adaptive capacity and infrastructure. The agricultural sector contributes around 30% of GDP and by 80% of the population. The Second National Communication to the UNFCCC reveals that nearly 50% of the total communes in Cambodia is categorized between vulnerable to extremely vulnerable to climate viability. To address the issue, the mainstreaming for climate change adaptation and disaster risk management into sub-national planning and budgeting has become recognized as increasingly important in building the country’s absorptive capacity and enhancing community resilience to climate impact”. 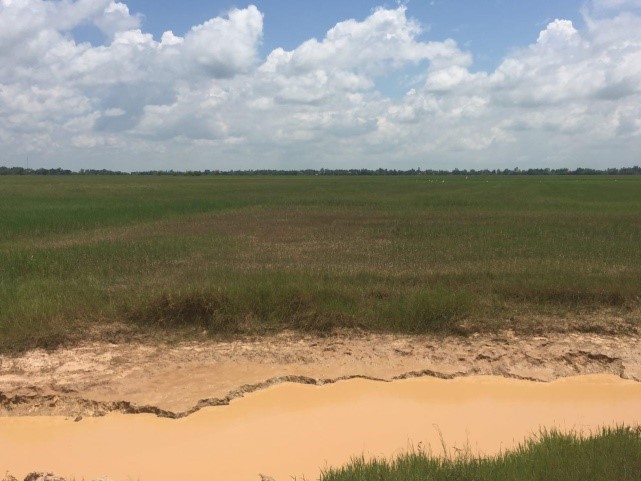 As a key part of this TOT, Ms. Navirak a National Coordinator GEF Small Grants Programme United Nations Development Programme said that the Vulnerability Reduction Assessment (VRA) approach is an important element of UNDP’s monitoring and evaluation framework for climate change adaptation projects at the community, subnational, and national levels. It has been implemented in a growing number of local initiatives under UNDP’s Community Based Adaptation (CBA) Programme, with funding from the Global Environment Facility. It is designed to measure the changing climate vulnerabilities of communities, and to be comparable across vastly different projects, regions, and contexts, making it possible to determine if a given project is successful or unsuccessful in reducing climate change risks. The VRA can be compared to a guided participatory rural appraisal (PRA), focusing on community perceptions of vulnerability to climate change and capacity to adapt. The VRA is based on a composite of 4 indicator questions, tailored to capture locally-relevant issues that are at the heart of understanding vulnerability to climate change.

As respectively National Gender ad Social, National Planning Advisor, from SRL Project of NCDDs and resource person in this training, Mr Vorn Savuth and Ms. Khiev Bunroeub are very welcome and highly appreciates to NECA/NGOF for this great collaboration and contribution to NCDD policy objectives. Both added that “CSOs role in community development especially in grass root is very vital through raise awareness, capacity building, technical and financial support in order to empower vulnerable community to build resilience to climate change impacts…In last Mach 2017; NCDD just launched the climate change mainstreaming guideline as well as Gender and Social Inclusion. These papers have been developed and consulted with key stakeholders at national and sub-national levels on the tools to ensure the climate change will be integrate into their investment plan and development plan. This guideline will be a roadmap for concerning stakeholders both duty-bearer and right-holders for mainstreaming CCA/DRR into commune development planning effectively”

With the oversight of the National Committee for Sustainable Development a former National Climate Change Committee, the Climate Change Department of the Ministry of Environment coordinated to develop the Cambodia Climate Change Strategic Plan (CCCSP) 2014-2023 and introduce the guideline and VRA tool to the local authority and provincial department at sub-national level for learning on the climate change, relevant policies and analysts the venerable are in their real situation area and sectors.

National Program for Sub-National Democratic Development 2010-2019 (NP-SNDD) is another plan of RGC in the sub-national level for the further expansion of the single window mechanism to cover all municipalities, districts and khans, and further promoting broader delegation of powers – which means to give public services to the citizens directly without complicated administration system. As stated in NP-SNDD, RGC’s goals for sub-national democratic development are:
• Create a culture of local participatory democracy, accountable to the citizens
• Improve public services and infrastructures
• Bring about social and economic development
• Contribute to poverty reduction