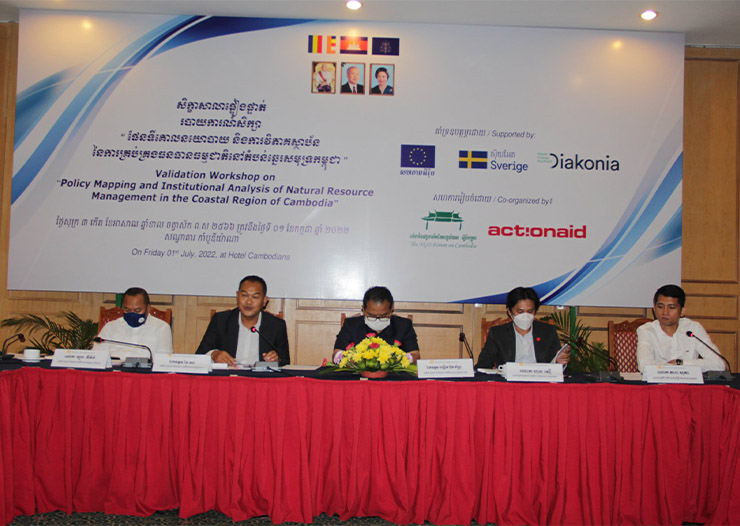 The NGO Forum on Cambodia (NGOF) and its partner NGOs, ActionAid, supported and facilitated a study on Policy Mapping and Institutional Analysis of Natural Resource Management (NRM) in the Coastal Region of Cambodia in order to find out existing policies and regulations, challenges, and recommendations on the NRM in the coastal areas of four provinces, Koh Kong, Preah Sihanouk, Kampot, and Kep. The study was conducted by a team of consultant experts in the field of the subject.

Findings of the study were prepared for relevant institutions such as representatives of the provincial governors, local communities, provincial department representatives, Civil Society Organizations (CSO), and private sectors, to gather to listen and provide comments. The concrete objectives of the meeting are:
1. Share the preliminary findings to the relevant stakeholders.
2. Validate and collect comments and feedbacks from relevant stakeholders to finalize the study report.

The workshop was held for half-day from 8:30 to 12:00 in Cambodiana. There were 40 (08 females) people participated in the workshop. Ms. Sen Rumduol, NGOF, was at the meeting master ceremony.
At the beginning of the event, she invited delegates to chair the meeting. They were:
1. H.E. Dr. Ouk Pheaktra, Deputy Governor of Koh Kong province
2. H.E. Long Dimang, Deputy Governor of Preah Sihanouk province
3. H.E. Ney Kong, Deputy Governor of Kampot province
4. Mr. Hong Reaksmey, Country Director, ActionAid Cambodia
5. Mr. Pheap Sophea, Land and Forestry Program Manager, NGOF

Master Ceremony: Ms. Sen Rumduol briefly took note the agenda and the objectives of the workshop as stated in the draft handouts distributed to the participants. The meeting was officially started with the musical national anthem.

Welcome remarks by Mr. Pheap Sophea, Land and Forestry Program Manager, the NGOF
NGOF consists of key 35 NGOs that are members of the NGOF working together to assist Royal Government of Cambodia (RGC) on development and conservation of natural resources. Among them, eight members of the NGOF have working closely on policy development and implementation. He further underlined that there are three networks on: Water, Land, and Forest (including mangrove) have been actively coordinated for improvement of the sector management and development.

Mr. Sopheap emphasized that as the worlds have been worried on tackling on Climate Change (CC), mangrove and coastal areas are important to prevent disaster risks from CC. He emphasized that booming developments have had happened in the coastal areas for the last 10 years or so. He, therefore, underlined that we wanted developments with participations of all relevant stakeholders and the development integrity in the areas. He added that many Community Fisheries (CFi) and the networks suggested having a study on policy on coastal development and implementation to ensure sustainable economy in the areas, in particular, and in Cambodia, in general. Mr. Sopheap admitted that the RGC and the provincial line agencies have been closely collaborated on NRM and conservation for the last decades. He announced that the workshop was to present findings of the study in order to further collect inputs and clarification on recommendations of the policy implementation and development of the coastal areas.

Among the four provinces of the coastal areas, representatives of three provinces, Koh Kong, Preah Sihanouk, and Kampot presented in the event, but Kep was absent, he noted. He stressed that four agencies (CSO, RGC, Private, and Community) have been working together in sustainable development.

Opening remarks by Mr. Hong Reaksmey, Country Director, ActionAid Cambodia
He emphasized that ActionAid is happy to work with the NGOF to support the study and share the study findings for future references. He underlined that the study is the first conservation and policy study in coastal region. At the same time, he hoped to hear and welcome comments from the participants and especially those are from the provincial representatives on the study findings.

Mr. Reaksmey noted that goal of the ActionAidl is to strengthen communities, e.g. CFis, in the coastal areas for their daily livelihoods. He raised concerns that CFi members reported that there are unclear boundaries between the CFi and Protected Areas (PA), and Community Protected Areas (CPA). Because representatives of the provincial authorities were in the event, we would like to know that what are the concerns that provincial authorities actively participated in protection of Natural Resources, e.g. CFi or CFi Networks, he claimed. Mr. Reaksmey mentioned that the NGOs really would like to create Regional Coastal Network in the future, if funds available. He hoped, also, that the provincial authorities will closely collaborate with the ideas.

Background Methodology and Objectives:
She underlined the objectives and study questions of the study to the participants. With maps, she showed the study site to the participants. They are: Koh Kong, Preah Sihanouk, Kampot, and Kep. The study methodology included collection of secondary data and literature reviews; and primary data collections from the study target sites. The study respondents: those are from CFi members and key interviewers. The objectives of the study are:
• To conduct policy mapping and institutional arrangement analysis to understand gaps concerning the coastal resources management and development and coping mechanisms.
• The study will support NGOs and coastal communities to increase their knowledge, improve capacity to make dialogue, and increase dialogue with relevant government and stakeholders in the area of coastal resources management to improve the coast management.

The conceptual framework of the study was: CFi members reported that the Natural Resources of the areas have been reduced.

Mr. Pheap Sophea, Land and Forestry Program Manager, the NGOF, Wrap up and Closing Remarks
He thanked all Excellency, the participants, and the study team for the hard work and active participation of the workshop day. He stressed that the study findings will be translated into Khmer and brought to each province for further comments. The comments from the workshop of the day will be thoroughly consolidated, he underlined. Mr. Sophea ended the workshop with best wishes to all the participants.