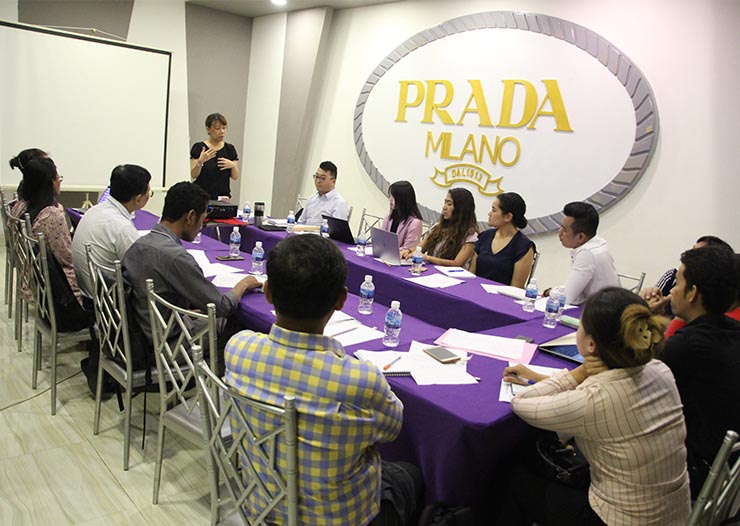 On July 08, 2019, NGOF and AFSC were co-organized on the summary report of the Kick-off workshop on women’s Economic Participation and Gender Relation Research which was held at Tonle Basac 1 Restaurant. The main purpose of the workshop is to 1)-introduce the research plan (objectives and propose a case study), and 2)- seek more suggestions from participants and discussion overall on the Women’s economic participation and Gender relation in Cambodia. Totally, there were 21 participants including 10 female participants who are the representative of LAHRiN, IPFN and RCC networks.

Dr. Zhou Peng and AFSC Presentation that the purpose of this research is to investigate the relationship between women’s lives within the economic development relating to Chinese Investment and Businesses in Cambodia. There is a gap in the research in China concerning issues of social development as current Chinese research focusses on politics and economics as opposed to CSR. Though the Chinese government is sensitive about human rights, gender equality is something they are proud of and are willing to discuss openly, explaining the gendered perspective of this research.

The methodology of this research are qualitative research and in-depth interviews with semi-structured questions with focus group and participatory observation.

The content of women issues should be included in the project were:
• An aim is to increase the awareness of business owners of CSR and give practical recommendations
• Consider lessons from past cases and how engaging with the local population can mitigate extra costs
• Also, need to take into consideration the Greening the BRI policies

As the result of this workshop there were some suggestion for AFSC’s steps which provided by the keys NGOs who participated were:
• Meet with a local NGO to organize how to meet local people
• Will start with a group that may be a focus group
• Will find women through that to have an in-depth interview
• Design a questionnaire and then use a translator though this is not a perfect method
• Dividing larger groups into smaller groups of 3-5 people in order to allow people to share their stories confidently
• Need to ensure that the NGOs that AFSC works with have the trust of the community and this may require extra research into the NGOs themselves.
And suggestions about methods to get compelling women’s stories which can focus groups and participatory tools work for local when depending on a translator:
• Letting people express themselves without using leading questions, and perhaps allowing people the draw instead of writing.
• Need different translators for different environments, perhaps a local and a woman
• Need to consider that participants may be more open during breaks and after the session rather than during the sessions
• Empower women to speak without judgment