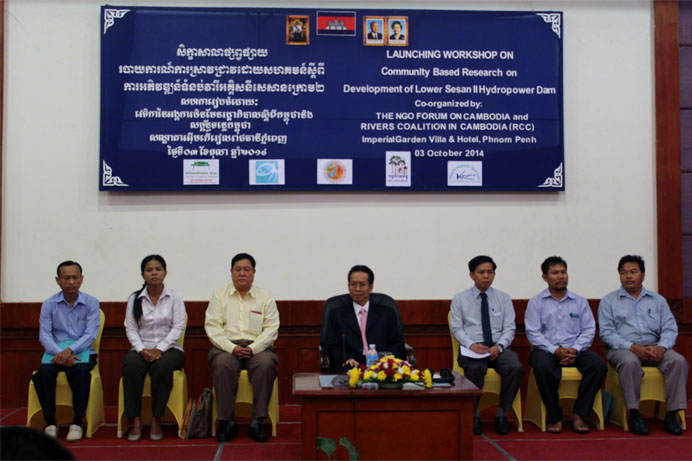 Phnom Penh, October 03, 2014:  Community Based Research on the development of the Lower Sesan II Hydropower Dam (LS2 Dam) Report was successfully circulated to the public in a half-day workshop at the Imperial Garden Villa & Hotel, Phnom Penh. Participating in the launching workshop were government representatives from the Ministry of Environment (MoE), Stung Treng Governor, Sesan District Chief, Kbal Romeas Commune Chief, Development Partners and community members from Stung Treng, Rattanakiri and other provinces affected by the LS2 Dam project.

The Community Based Research Team, supported by NGO Forum on Cambodia (NGOF) and Rivers Coalition in Cambodia (RCC),  completed the research survey on the current status of the dam’s construction and it’s  impact on  the the villagers’ livelihoods.

The objectives of this workshop were  the circulation the  research report to all the stakeholders, and at the same time to urge  attention and seek for solutions from the government and investors who  have an  obligation to responsd to those effected by the dam’s construction.

“The LS2 dam is the first large dam development in Cambodia on the Sesan River and was stated in 2007. The project clear plans however, there are considerable gaps in the implementation of the plans. Some examples of this are the lack of information about the land that will be cleared around the reservoir, and the illegal logging outside the reservoir zone,” said Mr. Tek Vannara, NGOF’s Executive Director.

“Moreover,  resettlement guidelines adopted has not been respected and the compensation policy has not yet been shared to the public especially to the villagers; hence, I sincerely hope that this report could be  used by  the government and the companies to use in planning for  better and sustainable solutions for those who are affected this dam project,” he continued.

The presentations on LS2 Dam’s current status and the research report were presented by the community members during the workshop. At the end the community’s joint statement on “The Rejection of the LS2 Dam Compensation and Resettlement and recommendation to cancel  the LS2 Dam Project” was created and widely sharing to the participants as well as the media network.

“We are totally satisfied with all the natural resources such as forest, river, fish which considered as our main source for nutrition, and so many other things around us. With these resources, my family and others are able to survive peacefully. We do not want this dam that will destroy our families and where we live. We have learnt from the research report that LS2 Dam harms us more than provides benefits. I hope the government will be able to understand our needs and give us justice,” said Ms. Saron Sokhom, one of Community Based Research from Stung Treng Province.

The LS2 dam is the first large dam development project in Cambodia is being constrcuted  along the Sesan River in Stung Treng Province. Its capacity is 400 MW at a cost of pproximately USD 800 million with investment shared between three companies. The report reveals that  this project has affected thousands of people living along the Sesan River. Currently, the dam is in being constrcuted  construction, the area around reservior is being clared clearance  and people resettled.