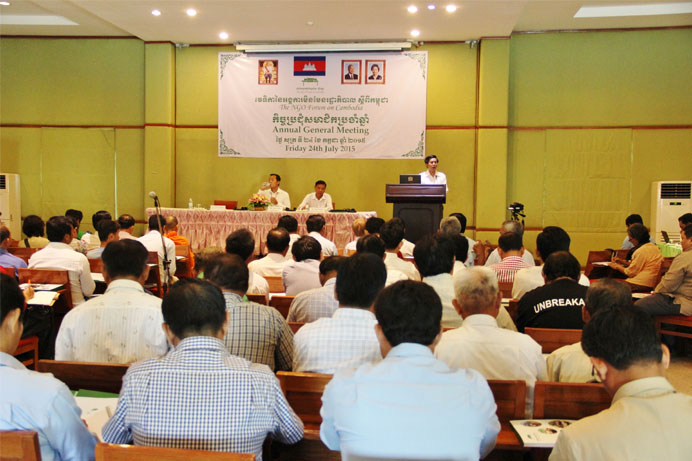 Officially opening the event, Mr. Sim Dara, a member of the Management Committee of the NGO Forum on Cambodia and a senior manager for an urban vision, initiative of the World Vision Cambodia (WVC), mentioned that this one-day meeting was mainly organized to not only disseminate the key achievements of NGOF but other important issues including:

The progress of the LANGO was updated by Dr. Tek Vannara, NGOF’s Executive Director (ED). During the last few months, many activities counting social media campaigns, press conferences, the legal analysis, joint statements and many other strategies were conducted by NGOF together with major local and international NGOs in Cambodia that share such concerns with the negative results of the law. Meanwhile, the consequences and legal analysis were provided by Mr. Kuy Neam, an independent lawyer. The three risks that NGO could face from the LANGO are removing the NGOs/CSOs from the Ministry of Interior (MoI), fines and criminal.

The third main agenda was led by H.E. Srun Darith, Advisor to Ministry of Environment (MoE), presented the current situation about the Economic Land Concession (ELC) in protected areas and national parks of Cambodia. The session consisted of the cons and pros of the ELC in Cambodia and the way forward that Ministry of Environment is going to take. He did share about the achievement that the government had done on the ELCs as well. He said, “So far, the MAFF has reviewed around 120-130 ELCs projects and the MoE has reviewed around 113 ELC projects.”

As the result, several activities have been taken:

The election to select the new Management Committee (MC) to replace Ms. Te Sokvy, after finished her mandate, was organized during the same day. Subsequently, Mrs. Pok Panhavichetr from Cambodian Women’s Crisis Cambodia (CWCC) was eligible for the MC position, since she receive 41 voices out of the 69 eligible votes. Her role was officially started after the result was being revealed.

At the end of the agenda, Mr. Sim Dara summarized the main discussion outputs about the LANGO, the result of the election, The result of the election for a member of management committees of the NGO Forum on Cambodia, the update about the Don Sahong Hydropower and ELCs in protected areas and national parks, as well as, the key achievements of the NGO Forum on Cambodia. Taking this opportunity, Mr. Sim Dara expressed his congratulation of Mrs. Pok Panhavichetr, a new MC member. He shared the positive believed that the NGOF will be still going smoothly and generating more satisfied outputs under her contribution. 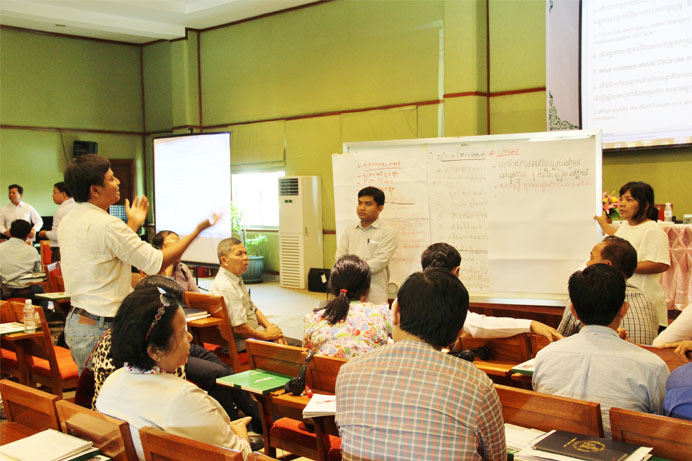