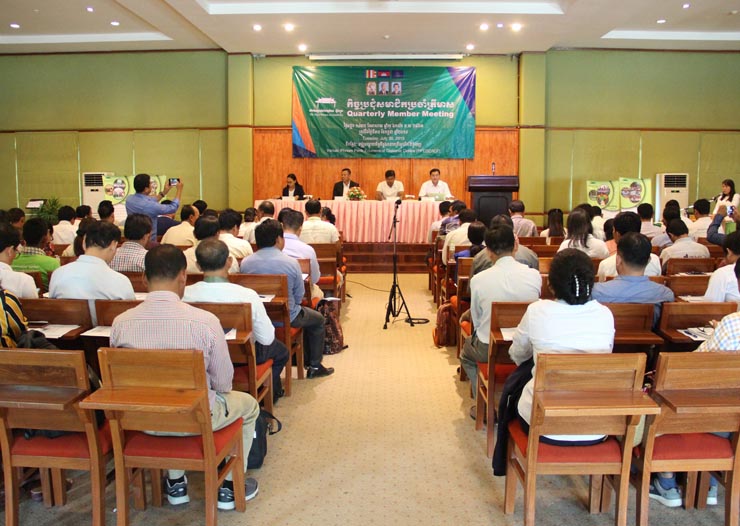 The NGO Forum on Cambodia’s (NGOF) organized its quarterly member meeting on July 30, 2019, at Phnom Penh Ecumenical Diakonia Centre (PPEDC/ICF) from 08:00 – 12:00 presided over by Mr. Om Savath, Member of NGOF’s Management Committee and Executive Director of FACT. There were 92 participants (27 female) represented to NGO members of NGOF in Cambodia.

Mr. Om Savath, Member of NGOF’s Management Committee and Executive Director of FACT gave warm welcome remarks and thanked all NGO members, government, and development partners for their participation in the important meeting. Chair of the meeting informed the meeting objectives to share information with NGO members and discuss their challenges and needs in order to accomplish the goal as set in the NGOF work plan. Chairman also briefed the key agendas of meeting as following:  1) updating on the significant progress report of NGOF; 2) Management and Implementation of National Action Program to Combat Land Degradation 2018-2027; 3). Update on the Implementation of the Royal Government’s Regulations for the Prevention and Combating of Natural Disasters; 4). Update on the draft of Cambodia Vision 2050 accomplishes many major achievements within the last quarter.

Cambodian as a signatory of the UNCCD. In Africa it preventing land degradation. It focuses on multi-sectors. To Combat Land Degradation. It took 10 years to developed and passed on 02 April 2018. There are 7 chapters including the strategy for implementation. The budget about $40 million. It includes monitoring and evaluation.

Progress on NAP implementation. TWG on Agriculture and Water, TWG on land degradation, TWG on NAP which consists of 8 ministries. The first meeting conducted.

Guest Speaker 2: H.E General Eng Hy, Representative of National Committee for the Prevention and Combating of Natural Disasters Update on the Implementation of the Royal Government’s Regulations for the Prevention and Combating of Natural Disasters. Established on January 2016. It combats the illegal forestry in the northeastern province and then the whole country which leads by General Sao Sokha and General Hou Sokun. The strategic plan was developed to protect wildlife and natural resources. The objective is to cut the relationship with the community. The awareness-raising on forestry and environment. While they transported it. In 2019 we developed the action plan to combat illegal logging because the public asked the question of what action needs to be done by the committee. In Tbong khmum, Kratie, stungtreng and Rattanakiri provinces. There are 690 members to implement it. We should take action but not only educate them. They change their strategy to transport by motor rather than the truck. The new strategy to deal with strict policy enforcement and destroyed transportation. We use chemical and cut the machine or burnt it. We will collect all transportation as the museum for public visit. The public requested the committee to keep it and advised them to use for another purpose. In fact, they did not respect law enforcement. The warning measure to destroy all kind of transportation is the urgent action to combat illegal logging. In the campaign, there are 147 trucks were destroyed. 64 trucks kept it for the court decision. There were 33 persons were arrested including Chinese and Vietnamese. The relevant authorities also arrested and sent to jail. The objective is to protect the forest. It has different public opinions.

Dr. Tek Vannara, Executive Director of NGOF also updated briefly the progress of NGOF as the following major achievements from April to July 2019:

– Cooperated with Henan University, IUCN, American Musem of water history. The Trans-Boundary Conference for preservation of ecosystem in Asia for the change in the global.

– Coordinated and led CSO to attend pre-meeting of IP Day with MRD. It will  be held on 14 August 2019 in Ratanakiri province.

– Coordinated CSO to the consultation workshop and collect inputs for the assessment on  Gender, environment and climate change  2019-2023 of MoWA.

– Update the result of budget with the Royal government of Cambodia and CSO for CPDD, AZTWG, Climate Change.

– Organized mid-year reflection to developed AOP and AOB and learn the eco-system in Kok Tral.

– Cooperated with Oxfam and partner to organise the multi-stakeholder dialogue on FDI in agriculture.

– Provided input on the investment and special economic zone.

– Coordinated CSO to provide inputs in the regional conference of future of Mekong river.

– Co-organised the workshop on “Mekong Basin Connect Workshop in Cambodia renewable energy with Stimson center, IUCN and Oxfam on and U.S Embassy.

– Organized coaching on protocol and diplomacy.

– Coordinated RCC to meet with CNMC and Tonlesap authority about the cooperation of water government in Cambodia.

– Joined speaker in the dialogue on climate talk.

– Developed proposal and submitted to Diakonia, NPA and other donors.

– Coordinated research on Chinese investment on the impact on women economic participation.

– Organised the sub-national workshop on the CITIZEN budget information which response to climate change in Cambodia in Siem Reap and kampongcham provinces.

– Shared experience of NGO Forum with students from Hong Kong.

– Organized training on the Istanbul principle which targeting the provincial NGO network in Siem Reap.

– Coorperate with MLMPU facilitated NGOs members of Land and Housing Rights Networks which including CCHRS, LICADHO, CEDT and GVO participated in the Dissemination and Consultative Workshop on Updating of Housing Implementation in Pursat and Ratanakiri province.

– Coordinated CSO to deal with land dispute cases in Pursat and Preahvihear provinces.

– Provided inputs on the EIA report.

At the closing of the meeting, Mr. Om Savath, Member of NGOF’s Management Committee and Executive Director of FACT thanked the honorable guest speakers and participants for sharing the knowledge and experience related to the topics proposed at the meeting responding to objectives and expected results.