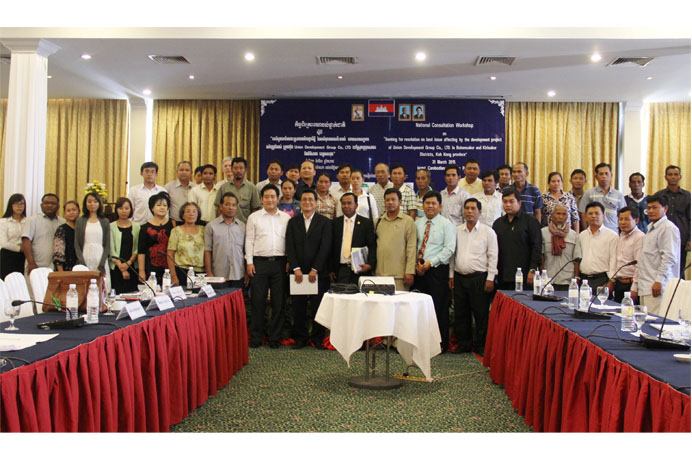 This event was organized in order to discuss and seek for solutions to stop new eviction and resettlement, improve existing new locations, stop violence in the dispute locations, figure how to implement a leopard skin policy, and to seek for the verification on number of affected communities and commitment for resolution by Cambodian government through MoE and UDG.

Dr. Tek Vannara, NGOF’s Executive Director mentioned that UDG is the one project aiming to develop the commerce and tourism resort in accordance with international standard, and it is in the development progress at the moment, since the company, presently, in the process of constructing the new roads, hotels, casino, port and etc.”

“On the other hand, this development project does have negative impacts on the villagers and the environment. For example, the forest around the development location is being destroyed and this effects the villagers’ livelihood, eco-system and wildlife around the area,” said Tek Vannara. “In responding to this issue, we urge the government to properly monitor ongoing implementation of project and the Environment Impact Assessments (EIA) with the participants of all the relevant parties to ensure the transparent and proper compensation to the affected families, and checking the standard of the new houses in resettlement area ,” he added.

During a workshop, H.E, Bun Saroeun claimed that as the project continues there will be no more violations to the families by the authorities. Indeed, in case of a violation, he encouraged the villagers to report it immediately to compentency authorities, particullarly the Ministry of Environment for intervention and prevention.

After active discussion among the participants, especially, between national and sub-national government, local authorities, villagers , NGOs, and Chinese company representatives come up with some suggestions, which they believe it would help solving their problems as following: