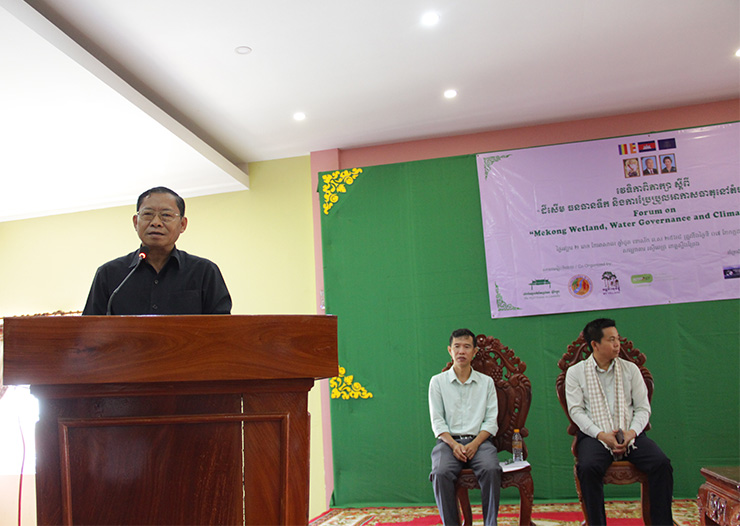 The NGO Forum on Cambodia, in collaboration with CEPA, MVI and NTFP-EP, with fund supported from Oxfam and SRJS, organized Public Forum on Wetlands, Water Resources, and Climate Change in Mekong River Basin on 07 July 2020 at Reaksmey Pich Hotel, Stung Treng Province. There were 52 participants (12 women) from representatives of the National Mekong Committee of Cambodia, Tonle Sap Authority, Freshwater Fisheries Research and Development Institute of Fisheries Administration, Tonle Sap Lake Fishing Community. Stung Treng Fishing Community Network, Deputy Governor of Stung Treng Provincial Board of Governors and national / international NGOs, as well as Professor of the Royal University of Phnom Penh, Royal University of Agriculture. The main objectives of this event were:
 Provided opportunities for stakeholders, including government agencies, community-based research institutes along the Mekong and Tonle Sap rivers, and civil society organizations to share their findings and views on WWC in the Mekong Basin.
 Compiled documents for understanding and disseminating the protection and conservation of Wetlands, Water Resources and Climate Change responses; and
 Provided dialogue opportunities among stakeholders to find solutions and develop action plans.

Dr. Tek Vannara, Executive Director of the NGO Forum on Cambodia, revealed that Cambodia now has three Ramsar sites (Stung Treng, Koh Kapi, and Prek Toal). He added that the forum was attended by members of the four river communities: Sekong, Sesan, Srepok and Mekong. He stressed that in the past two or three years, the river level has risen later than usual, especially this year. He stated that water is a common commodity of people and sectors. Therefore, the discussion should be “straightforward” to raise the real problem of water resources.

Mr. Sok Khim, Representative of Oxfam Cambodia, Oxfam has been building the capacity of many communities to deal with natural resource sustainable management and utilization, and to cope with disasters such as floods and droughts.

His Excellency began to suggest that we meet to discuss based on existing documents to raise opinions. He reiterated that the Ramsar Convention (Ramsar City is in Iran) is a Wetland Convention. He suggested that the IUCN representative be allowed to comment on the Ramsar affairs.