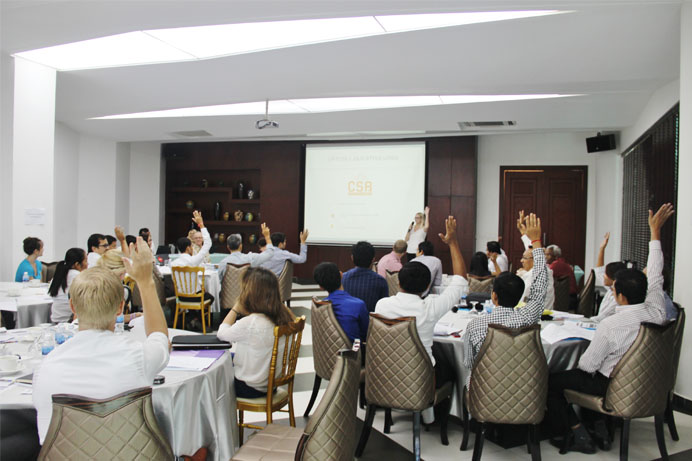 Phnom Penh, August, 7, 2015: Forty two participants (16 females), as the representatives from 27 private sectors, agribusiness companies and NGOs (17 companies, 3 Chambers of Commerce, 7 NGOs), joined together in a National Corporate Social Responsibility (CSR) meeting that facilitated by the core working group, to finalize the discussion on the Term of Reference (ToR) on National CSR platform at Tonle Bassac 2 restaurant.

The main goals of the meeting were to discuss and endorse ToR, to review progress of the thematic groups, to gain understanding of the concepts such as gender, CSR and Private sector & (PS) resilience, and lastly to identify joint activities with steady schedule. Furthermore, the ultimate goal of this ToR is to urge for the existing of a national CSR framework adopted by the Royal Government of Cambodia (RGC) by 2018, through the development of CSR guidelines, tools and principles which would widely know in Cambodia.

After the half day discussion, 90% of the members agreed and decided to adopt me on the ToR for National CSR Platform.
Sin Sokhomony, the Agriculture Policies Monitoring Project Coordinator of the NGOF, mentioned that the discussion went smoothly as planned. Plus, many organizations such as private sectors and agribusiness companies showed such interest for further engagement in the upcoming activities of CSR Platform. “I was surprised by how flat the meeting goes. It is the second time meeting, and we have agreed and adopted the platform already. Additionally, many companies are very fascinated with the our upcoming activities and wish to be a part,” he added.

It was the second meeting of the National CSR Platform, since its first launching on March 31, 2015. After the first meeting, a core group has developed a ToR of National CSR Platform, which was endorsed at this second meeting. The core group of this program is: EuroCham, Ezecom, Nexus for Carbon, plastics, NGO Forum on Cambodia, TI Cambodia and Oxfam

The next two meetings will be held in October and December 2015.