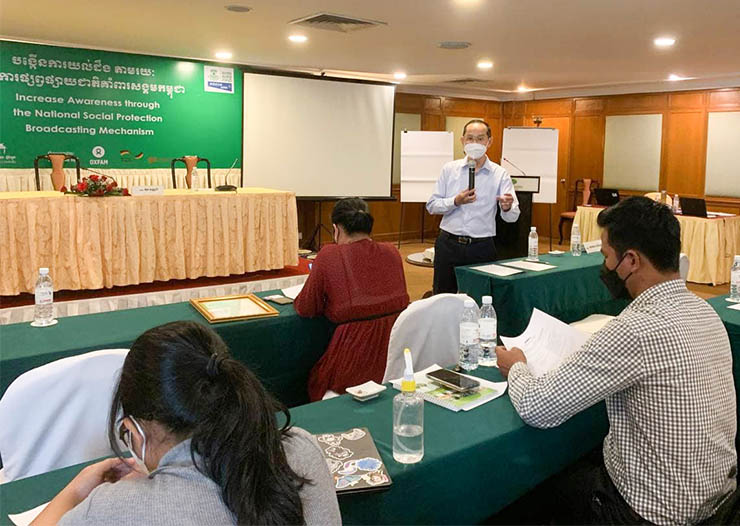 On 04 March 2022, The NGO Forum on Cambodia (NGOF) organized Orientation and Dissemination Workshop on National Social Protection Broadcasting Mechanism (NSPBM) to national and provincial NGOs network members/partners to join in the upcoming campaign throughout the countries at Sunway Hotel.

The NGO Forum on Cambodia as well as members/partners under financial support from GIZ – German Federal Ministry for Economic Cooperation and Development (BMZ) through Oxfam have been being jointly implemented National Social Protection Broadcasting Mechanism (#NSPBM) nationwide.

The NSPBM is designed to provide information on social protection to the entire cross-section of the population of Cambodia, both urban and rural citizens from all socio-economic backgrounds including those in the Tonle Sap Biosphere and the indigenous mountain tribe citizens.

“The NGO Forum on Cambodia as well as members/partners highly commit to join in this mechanism in order to communicate the information back and forth between the Royal Government of Cambodia (RGC) and the citizens about this Social Protection works from now onward”, said Dr. Tek Vannara, Executive Director of NGO Forum on Cambodia during the opening of the workshop to orient and disseminate the broadcasting materials on March 4th, 2022 at Sunway Hotel.