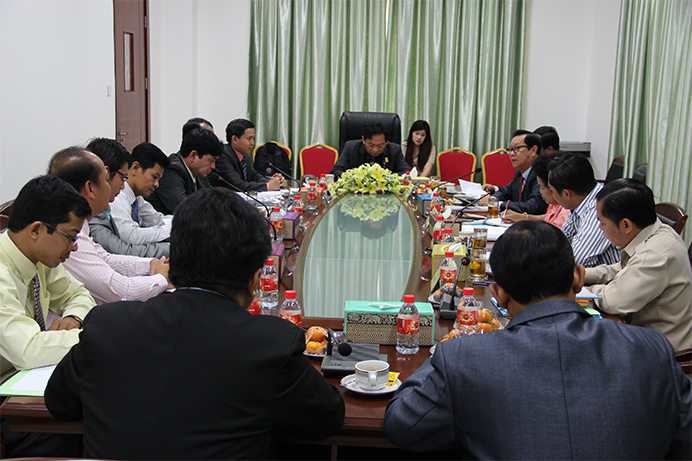 Phnom Penh, February 24 – 25, 2015:The NGO Forum on Cambodia (NGOF) together with seven other Civil Society Organizations (CSOs) attended a meeting with the 3rd Commission of the Senate, chaired by H.E. Dr. Mong Reththy to discuss the 8th National Advocacy Conference (NAC).

The meeting discussed  specific points, including  following up  the implementation on the previous NAC’s theme “Working Together to Promote Effective Reform on Land and Natural Resource Governance in Cambodia”, the updating of the main working activities for the year 2015 and the further discussion of the ongoing cooperation between CSOs and the 3rd Commission. The CSOs team took the opportunity to raise the concerns and the recommendations by the Indigenous People (IP) related to Social and Economic Land Concession, industrialization, hydropower-dams, forced eviction and resettlement, and access to information.

Additional issues were also raised for discussion. The 3rd Commission agreed to consider the Environment Impact Assessment (EIA) draft law and to address and to provide a progress report over the Don Sahong Case to the CSOs, and consider the suggestions of the NGOs, who are working closely on the Phnom Penh International Airport case. The CSOs insisted on the monitoring and implementation of the government and private sector, as well as the intervention. H.E. Mong Reththy considered if he needed to be a focal person to coordinate on these issues.

“This is the second follow up meeting on the 8th NAC we have during this week, as the first one was with the National Assembly’s 3rd Commission and followed by the Senate’s 3rd Commission today. The same objectives are being raised in the meeting and we are happy to receive the positive outcomes from our dialogue along with other matters which were not mentioned in the objectives, such as the suggestion from the commission over the Phnom Penh International Airport and the Don Sahong cases,” Mr. Tek Vannara, NGOF’s said   after the meeting.