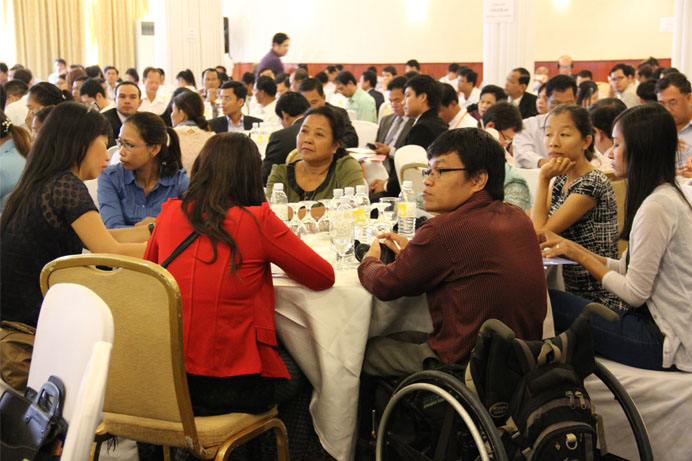 Phnom Penh, July 7, 2015: Joint organized by NGO Forum on Cambodia (NGO Forum), the Cooperation Committee for Cambodia (CCC), the Cambodia Center for Human Right (CCHR), the Cambodian Human Rights Action Committee (CHRAC) and other civil society organizations, a half day CSO led consultation workshop on Draft Law on Associations and Non-Governmental Organizations (LANGO) was conducted in order to receive the legal analysis on the current version of LANGO from all the participants and use this analysis as reference to reconfirm their collective position and key asks to the National Assembly prior to its consultation on July 08, 2015. Approximately 250 participants as representatives from members of Parliament (CNRP), relevant ministries, CSOs/NGOs, development partners,Unions, Associations, Communities and Youth attended this event.

During the half day workshop, different speakers from the umbrella NGOs, international NGOs, Researchers and consultants managed to share the analysis, made by legal experts, regarding concerns and gap of Draft LANGO along with feedback comments, questions and answers from hundreds of participants. As a result, asides of many articles of LANGO, which seemed against the Cambodian Constitution, there were several articles that appeared to be the most concerns included article 4 and 5, 24, and 26 to 29. These mentioned articles were considered to be made against citizen freedom of expression, privatizations and discrimination.

The first press conference during the break time was conducted with the representatives of various NGOs Leaders to show worries and standing position at the moment. In conclude, all the Local and International NGOs in Cambodia “Could not Accept LANGO in the Current Form” if the government is not willing to fix our concerns. The discussion in a huge group was made to collect the comments and feedback before closing.

The second press conference on LANGO was organized and happened on the same day at Imperial Hotel, in the afternoon right after the national workshop, in order to share the result to the media, local and international audiences to be heard. The LANGO analysis in both Khmer and English versions were send to the National Assembly (NA) for their consideration before the National Workshop to Understand about LANGO, organized by NA, happened on July 8, morning time, at NA.