Steung Treng, July 27 – 28, 2015: The Ministry of Mine and Energy (MoME), co-organized by the Rivers Coalition in Cambodia (RCC), conducted a two-day exposure visit to the Lower Sesan 2 hydropower dam in Steung Treng Province. This trip was joined and involved with the local and international NGOs, local authorities and the affected communities from the development project.

The significant objectives of this trip were:

Approximately 90 people from two villages, Sre Sronok and Sre Pok villages, who are still urging for the proper compensation, joined the trip led by H.E Ith Prang, the Secretary of States of MoME, to the resettlement site on the first day. Besides checking on the house quality and farm land (two types of houses – wooden and brick), the communities had the opportunities to question to the government, company and local authority about their concerns such as the solutions to the housing and farm land qualities, the proposed for a delay timeline to relocated area due to the rice planting season is coming, as well as the acceptable compensate procedures.

Mr. Ly Ber, a community member from Sre Pok Village, who also visiting the resettlement site said, “The government and company urged us to move to this new place around June this year. However, we are now asking them if we can delay till next year, since it’s a farming season at this moment, and if we start to move, we won’t have enough time to do our farm work. This will lead to the food shortage in the future. Moreover, the agricultural land they provided to us here is not ready to farm anytime soon.” The housing quality is another concern to him. “Since all the representatives are here, we would like to ask the company to monitor on the housing quality as well. We have heard recently that the floor of one new brick house was broken, before we move in,” he added.

In responding to all the requests, the government and company representatives promised to seek for better solutions that benefits both parties, and pay extra attention to the houses’ quality.

The group, then, continued to the LS2 Dam site around 10:30 am. At the dam site, the partakers were introduced to the see different locations of the construction areas along with the presentation of the dam development project conducted by company representative of Hydropower Lower Sesan 2 Co., Ltd.

According to Mr. Chou Shung, the Dam Construction Specialist, said that the dam construction is about 30% completed, while the whole project is planned to finish in 2018. “The dam could produce the electric power that will serve about 30% of the whole Cambodia. Plus in order to protect the fish species, we are going to hire the specialists from the U.S to conduct the study about fish passages at the end of 2015,” he added.

The Public Forum on “The Lower Sesan 2 Dam Development Project”, organized for the very first time for the LS2 Dam project, was held on the day after and participated by H.E Ith Prang, H.E Kol Sam Ol – Steung Treng’s Provincial Governor, RCC members, local/international NGOs and the affected communities. This half-day forum was conducted at Raksmey Pich Hotel with approximately 152 participants (47 females).

The agendas for the event composed of presentations the compensation policy and resettlement by the MoME, the dam construction progress by the Chinese company, the result of the impact assessment and challenges of the compensation and resettlement committee by independent consultant, and lastly the concern of the affected communities with questions and answers amongst government and the company.

“I am very appreciated all the effort of the government and RCC that made this very first public forum on LS2 Dam happened. We can say it is a history. What is more, each partner is every active and responsive with the strong intention to solve the problems for the affected communites,” Dr. Tek Vannar, NGOF’s Executive Director said during the opening of the forum.

At the end of the meeting, some results were produced according to the need and concerns of villagers. Those marks were:

Taking the chance, the government and RCC representatives managed to set way forward to this issue. Both parties planned to create the committee, composed of government, NGOs, and company representatives, which could help to accelerate working progress in providing better solution for the families.

This was the second exposure visit conducted by the government representatives to the LS2 Dam site. The first trip was led by H.E Pol Ham, the 3rd Commission of National Assembly, in coordination with the RCC, to visit both LS2 and Don Sahong Dam Sites. On the other hand, the plan to visit the LS2 Dam site was failed due to the changing of agenda.

LS2 dam is the largest dam development in Cambodia to date on the Sesan River which is located in Stung Treng Province. Its capacity is 400 MW with approximatel USD 800 millions under the investment of the share-holders between Royal Group Company and Chinese Company name Hydrolancang International Energy Co.Ltd (Huaneng Lancang River Hydropower Co. Ltd,) and Huaneng Group. The dam will rise 75m above sea level and 8km long, creating a 33,560 hectare reservoir. Approximately 5,000 people, many of whom are ethnic minorities will be resettled as they live in the dam’s reservoir. 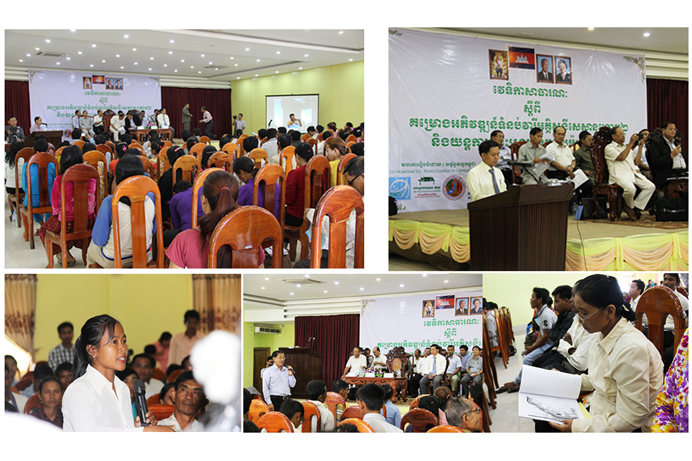