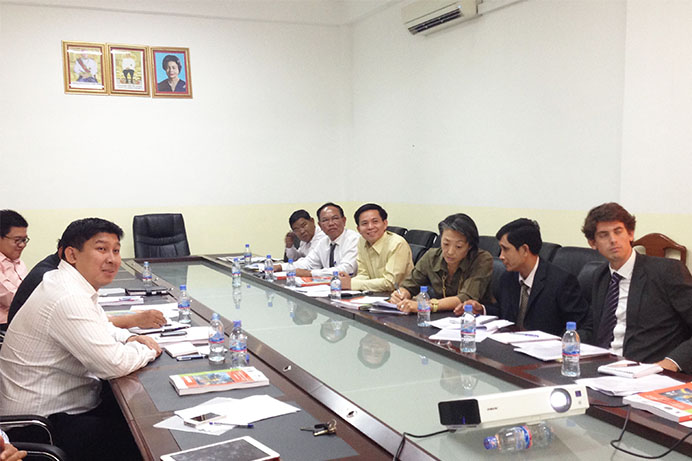 Phnom Penh, July 24, 2014: A group of national and international NGOs working on the environment issues in Cambodia attended a meeting, facilitated by The NGO Forum on Cambodia (NGOF), on the progress of Union Development Group (UDG) development project with the H.E Say Sam Al, Minister of Environment Ministry and his colleagues at the Ministry of Environment (MoE). The other four NGO representatives attended the meeting were Adhoc, CHRAC, Adhoc and OHCHR.

The main agenda during the occasion was the presentation of the investigation report on the “Impacts on Inhabitants by the Union Development Group (UDG) Co., LTD Development” in Koh Kong province to MoE. The report outlines the history of the land dispute, updates on the current situation and presents the requests from the affected families and provided the recommendations from Civil Society Organizations (CSOs). The Minister had no objection upon the report results, and strongly requested all the relevant organizations to cooperate together with the government especially, MoE, in solving the problems for the community in Koh Kong.

During the conversation, every CSO representative had chances raised additional concerns and possible solutions which could be an effective tool to fix the land dispute problems, not only the UDG case but in the whole Cambodia. For example, Ms. Wan-Hea Lee, the current Representative of the High Commissioner for Human Right in Cambodia (OHCHR), suggested the MoE to produce the Proper Complaint Mechanism, with technical support from the CSOs that enable the government to deal with the complaints or confront situations in the right and at a short period of time.

“There is a sign of constructive result from this meeting, as the minister has accepted the report results and showed us his stance to work together with the CSOs to resolve the hitches for affected families. Additionally NGO representatives were also able to share their worries and recommendations to the government and most of them were being recognized by the minister,” said Mr. Tek Vannara, Executive Director of The NGO Forum, after the meeting.

As a result from the affirmative meeting, H.E Say Sam Al, has requested and agreed to work on various subjects such as:

A half-day meeting was finished with the very fruitful outcomes and each party promised to keep the meeting progress as a regular schedule between the government and NGOs to update, sharing and learning from each other in solving the problem for community people.