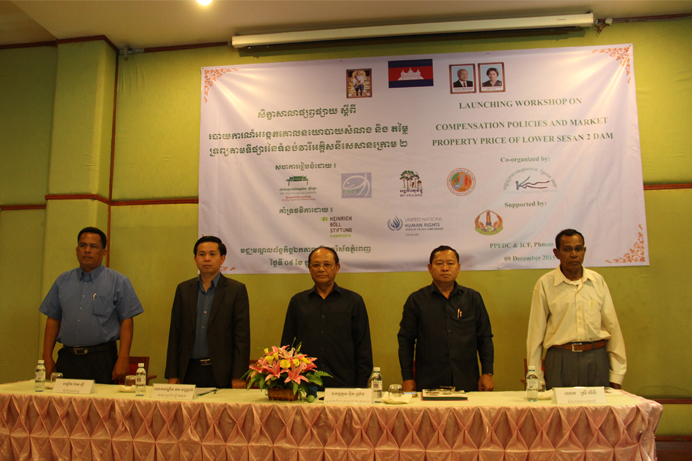 The asset surveys have raised concerns over villagers being pressured and intimidated into agreeing with the surveys and the proposed resettlement plans, which will relocate around 5,000 people.

The main objective of research is to review relevant and contradicting laws and policies and estimate just and fair compensation for the communities affected by the LS2 dam. Meanwhile, the specific objectives were to (1) Analyze relevant and contradicting laws and policies with current performance of hydroelectric dams in LS2; and analyze and provide appropriate compensation package based on compensation proposed by the three different constituencies such as National Assembly, Invested companies, and affected people who are living in areas of construction.

“Besides the circulation of the report result to the public, decision makers and media, this event is organized in order to providing space for relevant stakeholders, government, NGOs, consultant and communities, to discuss and find out the better solutions together with way forward in dealing this dilamar issue through the mechanism of LS2 resolution committee,” said Dr. Tek Vannara, NGOF’s Executive Director. “According to the report, it shows that the feasibility and Environmental Impact Accessment (EIA) studies for this project involved very limited information and consultation with affected communities, meaning it was not possible to properly assess the project’s impacts. Consultations conducted with villages in the reservoir area were not participatory, did not provide substantial information and did not focus on critical issues.”

One of the research result showed that Indigenous and ethnic minority communities stand to be among those most affected by the Lower Sesan 2 dam (LS2) Project. The language and cultures of resettled groups are at risk, and many of the villagers believe the project may force the dissolution of communities due to loss of livelihoods. Flooding will destroy traditional lands, ancient burial grounds, and spiritual cultural farms and cultural sites. In a 2013 study, 88% of upstream villagers surveyed stated that the Lower Sesan 2 dam (LS2) would destroy their spiritual and cultural beliefs. Communities fear a breakdown of community integrity and the disappearance of traditional practices and knowledge. Far-reaching impacts on fisheries and farms will affect the traditional livelihoods of other indigenous communities upstream and downstream of the projects.

Ms. Foy Sot, a 60 year-old community member from Rattankiri, who is affected by the dam development project, claimed that the hydropower development project has caused many troubles to her family, counting the health problem due to the water quality and the livelihood for the sharply decreasing in fish quantity. “I’m coming here with the high expectation to hear about the best solutions from the decision makers and the company that they can give to us,” she added.

“I’m here to learn about the survey result and reactions from the government as well as the company. Meanwhile, I bring with me questions about our compensation issue to see what are the things they can do for our communities,” Srey Liber, a 56 year-old community representative from Steung Treng. “Even though they couldn’t give us so much from this workshop, yet I could see a bit of a positive point from our advocacy work, since the government agreed to form the resolution committee to help solving our problems, and I do look forward to see their existing.”

LS2 dam is the first large dam development in Cambodia on the Sesan River which is located in Stung Treng Province. Its capacity is 400 MW with approximate USD 800 millions under the investment of the share-holders between Royal Group Company and Chinese Company name Hydrolancang International Energy Co.Ltd (Huaneng Lancang River Hydropower Co. Ltd,) and Huaneng Group.

The project will affect a thousand of population living along the Sesan River. Currently, the dam is about 40% of completion. Some of dirrectly affected people have accepted the compensation package offered by the government and company, some not yet accepted, and some refused the compensation and don’t want the dam to be constructed in their area.