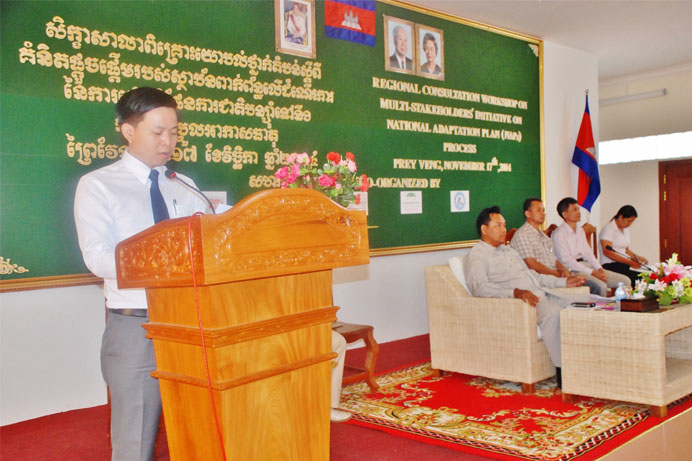 Prey Veng, November 17, 2014: Eight nine participants (29 Female) from six provinces including Prey Veng, Kompong Cham, and Phnom Penh assembled together to share their concerns in the Regional Consultation Workshop on National Adaptation Plans (NAPs), under the theme “Initial idea of civil society and community on NAPs components.” The event, organized by The NGO Forum (NGOF) brought together representatives from CSOs/NGO network members, affected communities, farmers, development partners, and the private sector to discuss this issue.

The three main objectives of the NAPs were to promote the public awareness on climate change , adaptation a national policy framework related to adaptation, and to understand the concerns of the affected communities, farmers, local authorities, , and sub national government on the impact of climate change.

“So far, under UNFCCC framework and Kyoto Protocol, the Cambodia government are in the process of developing the NAPs while many frameworks have been developed and were adopted last year such as CCCSP, Green Growth Policy, the Sectoral Climate Change strategic plan, and the National Strategic Development Plans,” said Mr. Tek Vannara, NGOF’s Executive Director. “At the same time, we have noted that the framework of the Cambodian NAP process has delayed due to several factors. Those are the Cambodia Climate Change Strategic Plan (CCCSP), climate change financing framework, and several climate mainstreaming initiatives at the sub‐national level.”

The framework of the NAP process for Cambodia has several building blocks already in place that can be enhanced to meet these two objectives. These include the Cambodia Climate Change Strategic Plan (CCCSP), climate change financing framework, and several climate mainstreaming initiatives at the sub‐national levels.

After the group discussion and consultations, the joined team had pointed out many challenges as well as the gaps in the process of NAPs in Cambodia such as: