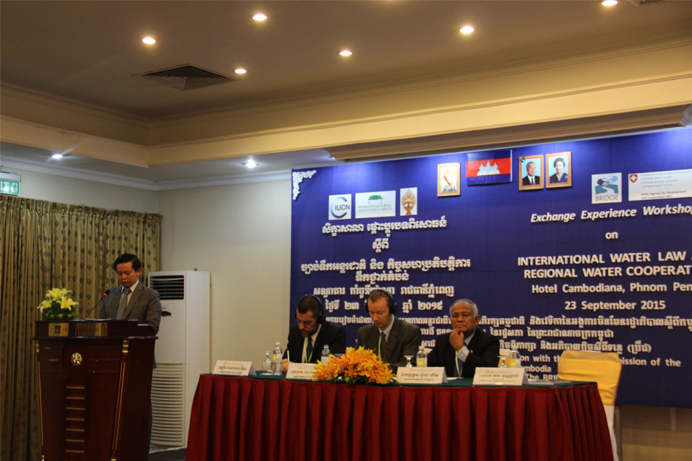 Phnom Penh, September 23, 2015: Today, International Union for Conservation of Nature (IUCN) together with the NGO Forum on Cambodia (NGOF) organized a hydroiplomacy training workshop on “International Water Law and Regional Cooperation” with cooperated with the Third Commission of National Assembly (NA) in Cambodia at Hotel Cambodiana. H.E Pol Ham, Chair of the Third commission of the National Assembly gave an opening remarks for this event.

The aims of the workshop are to open space between the NGO worker and NA members to discuss and gain better understanding upon international water law and the key provisions, substantive and procedural rules, and institutional aspects of the UN Watercourses Convention. This workshop will also include a presentation of the new BRIDGE publication “Entry into force of the UN Watercourses Convention aiding water governance in the Mekong River Basin: A legal analysis of why the UNWC (1997) in operation complements the Mekong Agreement (1995) and how this can improve transboundary water management within the Mekong Basin.”

Dr. Tek Vannara, NGOF’s ED shared that the BRIDGE project was form with purpose to build water governance capacities through learning, demonstration, leadership, and consensus-building in trans-boundary hotspot river Basins at which financed by the Water Diplomacy Programme of the Swiss Agency for Development and Cooperation (SDC). “It is a multi-regional project, implemented in nine river Basins located in South and Meso-America, Africa and Asia. In Asia, the BRIDGE project is working on the 3S Basins (Sekong, Sesan and Sre Pok rivers) shared by Cambodia, Vietnam and Lao PDR that operating since 2011,” he said.

IUCN strongly encourages Lower Mekong countries to ratify the United Nations Convention on the Law of the Non-navigational Uses of International Watercourses (UN Watercourses Convention, or UNWC). The meeting with the National Assembly focused on how the UNWC could serve as the legal basis for improved cooperation over international rivers by strengthening the Mekong Agreement and reinforcing the role of the Mekong River Commission as the leading governance body.

“Lower Mekong countries such as Cambodia have the biggest interest in ensuring the Mekong River and its cross-boundary tributaries are managed in an equitable, sustainable and cooperative manner,” said Raphaël Glémet, senior programme officer for water and wetlands, IUCN Asia. “The UNWC, once ratified, not only strengthens the existing Mekong Agreement but will also provide a robust legal framework for effective water cooperation across the entire basin.”

Also, the project has provided opportunities for dialogue and training on hydrodiplomacy for key stakeholders, facilitated the sharing of information on Integrated Water Resources Management (IWRM), and produced data and studies to support technical discussions  across basins.

International water law and Regional cooperation in the Lower Mekong Basin:
As the world’s most productive inland fishery, the Mekong Basin provides 25% of the global freshwater catch and serves as an important source of food, water and energy for over 60 million people in the basin. However, economic growth, hydropower development, and climate change have placed mounting pressure on this rich ecosystem.

International water law can help.  By setting rules and standards, it can strengthen water governance, enforce principles, and facilitate relationships between different parties.  As such, international water law serves to build consensus and reach agreement on shared waters.  Since coming into force in August 2014, the U.N. Convention on the Law of the Non-Navigational Uses of International Watercourses (UNWC) has emerged as a promising tool for the region.

The UNWC codifies three key principles: equitable and reasonable utilization, the duty to avoid significant harm, and the conservation of ecosystems and it is the only treaty governing shared freshwater resources that is of universal applicability. It rather includes a dispute resolution mechanism, which provides a road map for parties to the convention to settle potential conflicts that can arise. 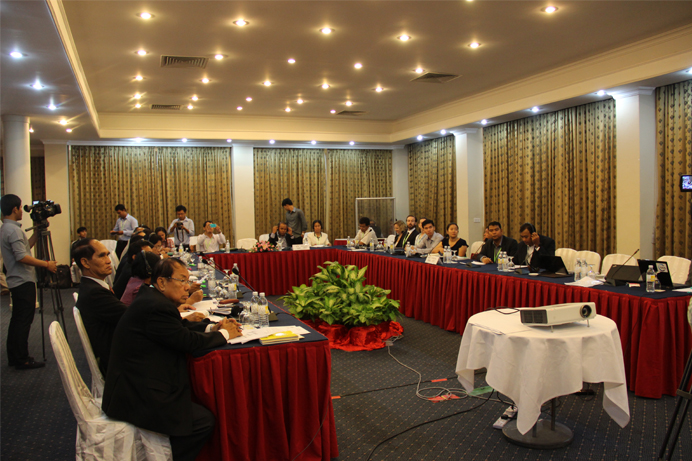