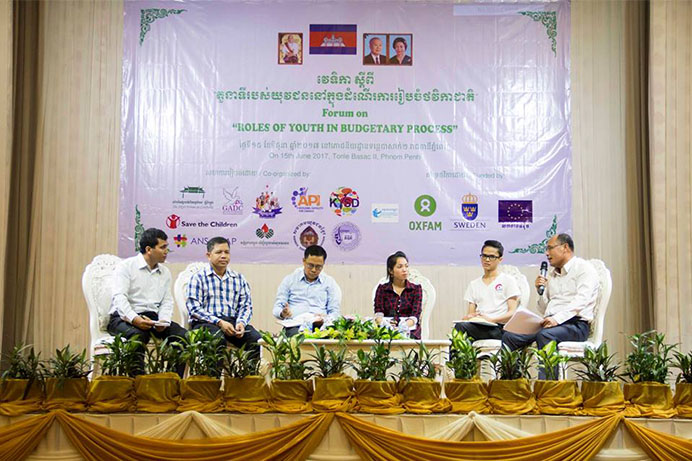 On 15 June 2017, the National Budget Project (NBP) of the NGO Forum on Cambodia (NGOF), with Budget Working Group (BWG) to organize Forum on ”Roles of Youth in Budgetary Process”. There are over 200 participants to join this forum at Tonle Basac 2 restuarant. The forum aim to increase knowledge and understanding of young people on budget process and budget transparency, as well as budget formulation process at national level. Furthermore, to encourage youth participation for contribution in budgeting process youth space in budgetary process where and how youth involve in budgeting process.

Youth is a potential group for the Cambodia development. Youth should be more involved to all development processes to ensure their needs are addressed. Youth participation in budget process may increase effectiveness and efficiency of budgeting while the country budget affected to everyone life. Youth participation may also contribute to increase the budget transparency. By seeing the important of youth in understanding and participating in budget process and budget transparency, the budget working group shares resources to organize this youth forum named” Role of Youth in Budgetary Process” with the following objectives:

Mr. Tek Vannara, Executive Director of NGO Forum on Cambodia (NGOF) provides open remarks to the forum as stated, he would like to highlight the development of Cambodia with budget work. Currently, we know that Cambodia is a member of ASEAN’s which have integrated with ASEAN since 2015 and become a lower middle-income country. Cambodia also has an industrial development policy from 2015 to 2025. Meanwhile, we are localizing the sustainable development for 2015 to 2030. We have also been implemented decentralized and de-concentration since 2002. In addition, Cambodia has just finished the election of a commune council last week. With this regard, we observed youth participation in development process has increasing especially play a role as leaders and members of commune councils. At the commune, there are two important plans: Development Plan and Investment Plans. These plans are funded from the national budget. We can say that it is a sub-national program designed to respond to the needs of the people. Ministry of Economy and Finance (MEF) also has a public finance reform program to respond to the development of our country. Each year, we have also Budget law or annual Financial Management Law, in which the process involves participation in each ministry at the national and the National Assembly. We see, CSOs are also invited in the processes, especially the macroeconomic consultation organized by the MEF and the Workshop on the draft budget law held by the commission II of National Assembly. The challenge is limited time to provide inputs and comments. At the sub-national, there is also a system of monitoring budget implementation through the implementation of Social Accountability Framework (ISAF) that reflects to our country’s development for opening for public participation in budget process. However, the public financial management law in 2008, it still a matter to broader participation in budget process at the national. Therefore, relevant ministries and institutions should consider in opening more public consultation in budget process both at national and subnational.

Mr. Lay Sokheang, Director of the budget department of Ministry of Economy and Finance presents the budget system in Cambodia. There are five main areas will be presented namely: 1). Update the Public Financial Management Reform Program in Cambodia (2013-2020); 2) Budget Strategic Plan 3) Program Budgeting, 4) Budget entity and 5) Process for implementation of current program budgeting. Regarding to the Public Financial Management Reform Program in Cambodia, there are 4 stages: 1) Budget is credible that ensure the collection of revenue, 2) Accountability of Financial that connect to all expenses with clear record in economic account 3) Linkage of budget and policy that ensure expenditure has connected to the development policy of the country 4) Accountability for performance that ensure the expense has come with the result. Cambodia has prepared herself to begin stage 3 of the Public Financial Management Reform Program since 2005. The implementation of strategies of the Public Financial Management Reform Program through the budge system process such as budget planning, budget approval, budget implementation and budget monitoring and evaluation. In the next stage, the Ministry of Economy and Finance plans to prepare strategic for public financial reform in 2017-2025 that based on the two last year experience and the learning experience from other countries such as Malaysia, Thailand, France…etc. The Ministry of Economy and Finance also plans to prepare mapping for the implementation; ensure the connection between budget system reform and public administration reform and salary reform; and also ensure the linkage between the budget reform at national and sub-national under the decentralization and deconcentralisation framework. 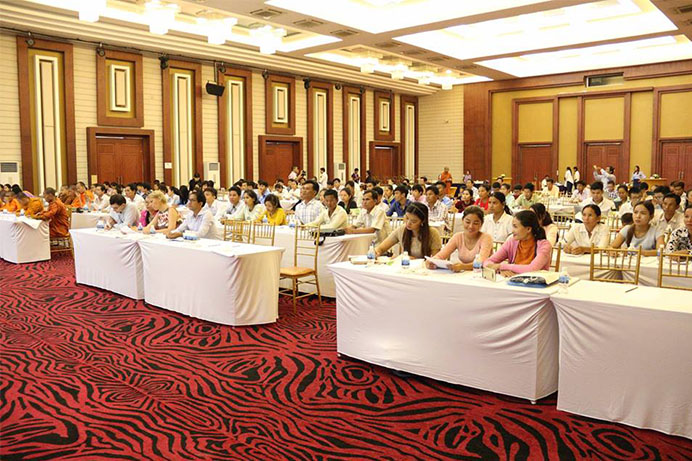 Mr. Sun Youra, Development Issues Program Manager of NGO Forum on Cambodia presents the budget transparency. He begins with the question to all participants “what is transparency?” The definition of transparency refers to the transparent that reflects to all elements without any secretion. Transparency links to governance that refers to freely exchange information in institution for decision making and result of the decision. Budget transparency refers to the use of budget based on the procedure of policy and best practices of international standard. In short the budget transparency refers to the expense with clear of documentation for instance receipt and process of expenditure. The budget transparency also involves the expense with the result as mention by the first speakers. Currently, the NGO Forum on Cambodia is observing the budget transparency of the Royal Government of Cambodia through the Open Budget Survey that assess on eight key budget documents namely Pre- Budget Statement, Executive budget Proposal, Enacted Budget, In-Year Report, Mid-Year Report, End- Year Report, Audit report and citizen budget whether they are publicly available, comprehensive and timely disclose of information. Based on the preliminary of the Open Budget Survey (OBS) 2017 observed the information in 2016 has indicated that Ministry of Economy and Finance publicly disclosed 6 key documents in timely based on the international best practices while there are two key documents.