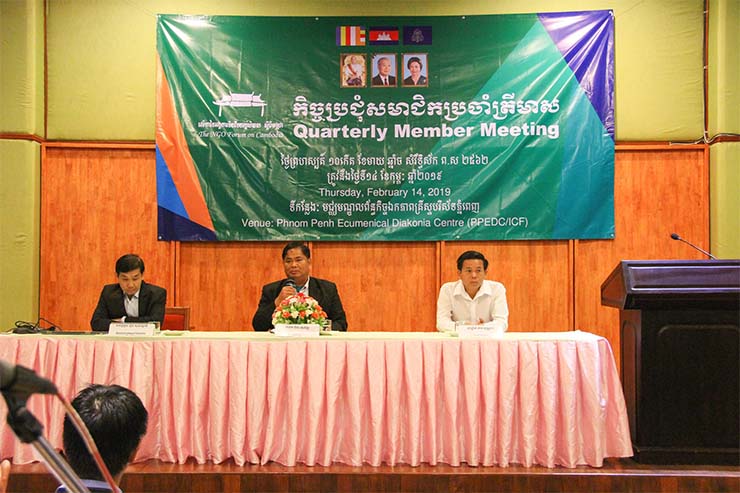 The NGO Forum on Cambodia’s (NGOF) quarterly member meeting held on February 2019 at Phnom Penh Ecumenical Diakonia Centre (PPEDC/ICF) from 08:00 – 12:00 presided over by Mr. Ngin Saorath, Member of NGOF’s Management Committee and Executive Director of CDPO. There were 122 participants (27 female) represented to NGO members of NGOF in Cambodia.

Mr. Ngin Saorath, chair of the meeting, gave a warm welcome and thanked all NGO members, government, and development partners for their participation in the important meeting. Chair of meeting informed the meeting objectives to share information with NGO members and discuss their challenges and needs in order to accomplish the goal as set in the NGOF work plan. Chairman also briefed the key agendas of meeting as the following: 1) Update on significant quarterly progress report of NGOF; 2) Update on the framework of Cambodia’s sustainable development goals; 3) Update on the process of Amendments of laws on Forestry, Fisheries, and Protected areas. NGO Forum has good cooperation with key relevant ministries such as MOE, MAFF, MRD, MOEF, Ministry of Land and coordinated with network members to accomplish many key achievements within the last quarter.

Update on the framework of Cambodia’s sustainable development goals

Guest Speaker 1: H.E Poch Sovanndy, Representative of Ministry of Planning presented on the framework of Cambodia’s sustainable development goals 2015-2030. The process of preparation CSDG. Member of the UN faced some challenges. Identify key points and select the new point and integrate into NSDP and existing mechanism. Started in early 2015. Organized many meetings with inter-ministries. February 2018, independence consultant developed the framework of Cambodia’s sustainable development goals 2015-2030. Discussed with the committee of economic policy and finance on 24 April 2018. Improve the indicator for a small group. Divided into two parts. The first part to review the result. The first part has five chapters. The second part of 2016-2030 added four more points. The global indicator has 244 points. Cambodia selected 52 points. Divided indicators 23. Improved and developed new indicators. It takes 3 stages in every five years. Way forward. It will be published in the next ten days. It will be disseminated at national and three sub-national levels. Monitoring and evaluate in every two years.

Organized General Assembly in every five years.75 DPO at provincial, district and commune levels. Establish in 1994. Working on disability rights with government national policy. Four
programs. Monitoring national policy. National Election Committee. Many policies related to disability. The second program conducts awareness raising and radio program on disability voice. Provide capacity building to the private sector, NGO such as Child Fund Cambodia. The third program DPO development to integrate disability in a commune investment fund. The fourth program of Organizational development.
What is Disability Inclusive Development? The process of including disable person in your program.

Update on the process of amendments to laws on Forestry, Fisheries and Protected areas.

Currently, the Chair of the committee is H.E Sar Kheng, Deputy Prime Minister and Minister of Interior. Coordinate with other ministries for formulation the organic law. There are five steps of the process of the amendment. Since 2011 the advisory committee was established to review the law on Decentralization and Deconcentration. The principle of the amendment of the three laws based on the following:

The forestry administration working through their mechanism from the national and sub-national follow D&D. It is at the end stage of the amendment. Inter-ministries technical working group has prepared the first draft of the amendments of three laws through many meetings. Since April 2017, the sub-national consultations were conducted to review the draft amendment.1). Law on the protected area has reviewed and improve it by TWG. The forestry law not yet completed only working up to chapter 6 out of 18 chapters. The fishery law being reviewed after the forestry law. It will be completed in the first quarter of 2019 and will call for consultation from NGOs at the end of the quarter of 2019. It will be submitted to council ministers in the third quarter of 2019.

Guest Speaker 2: Mr. But Sopheak, Deputy Department of Land Conflict, Ministry of Land Management, Urban Planning and Construction presented on the National Authority for Land Dispute Resolution. The main land dispute factors caused by internal war, the attitude of people, land registration for the people as well as state land registration not yet completed, urbanization and development, land marketing, the growth of population and need. Internal war. Since 1979, all land documents were completely destroyed during Pol Pot which causes land rights that established in 1975 to abolished. Land rights were re-established in 1989 through land use and management and land law. Land registration for citizen well as state land registration not yet completed (land tenure).

Since 1989 the government tried to register land to the citizen as much as possible. Land does not register yet tend to have many disputes caused by land grabber border to their neighboring land. The attitude of people in managing their land. Usually, the land dispute caused by having no gate around their land to define clearly where is the border. They define their border land by planting tree, bamboo or banana tree, the disputed caused when the tree growth to the border of their neighbor. The urbanization and development cause while the village, commune preparation follows the natural way such as the violation of open and close the road affect the land of the people. Market land. The dispute caused by the price of land rise very high cause the land dispute within the community, but not respect and allow their plot of land to the community. The population growth every year cause the need of land for house construction and production. These needs create many issues. When they occupy state land such as the development program, forest land, road sidewalk, lake, national park and other protected land cause land grabbing of state land.

Guest Speaker 3: Ms. Te Vouchlim, Department Director of Statistic and Planning, Ministry of Women Affairs (MoWA) presented on the draft of NSDP 2019-2023 focus on Gender. The input of CSOs in the draft NSDP and integrate it in the draft NSDP. The official meeting will be held on 22 February 2019 at the decision level. It based on the Fourth Rectangular Strategy. MoWA raised five points in the following:

Closing
At the closing of the meeting, Mr. Ngin Saorath, Member of NGOF’s Management Committee and Executive Director of CDPO, thanked the honorable guest speakers and participants for sharing the knowledge and experience related to the topics proposed at the meeting responding to objectives and expected results.