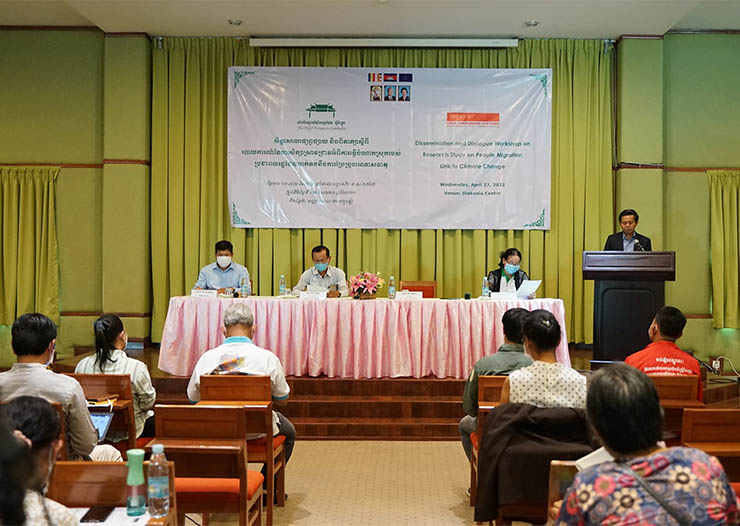 Having seen increasing Cambodian people migration to abroad for job, especially better jobs, a study commissioned by The NGOF, conducted by a consultant team in two sites: Kampong Svay district, Kampong Thom province; and Chetr Borei district, Kratie province. The study report was finalized on the 25th October 2021 and circulated for further clarifications and comments among relevant stakeholders. The comments were incorporated and the study report disseminated to the workshop on the 27th April 2022.

There were 50 (17 females) participants from key relevant stakeholders attended the workshop, some of those were online, and other in persons, which was held in DK Meeting Centre, Phnom Penh. In addition, some other participants were joined online from abroad such as Kuala Lumpur, Malaysia. The workshop was held during half a day, in the afternoon time (Annex 1).

Key speakers of the workshop and their contributions include:
Dr. Tek Vannara, Executive Director of the NGO Forum on Cambodia
On behalf of Climate Change (CC) Federation and on his behalf, he was honest to participate in the CC workshop with the two objectives above. He stressed that the results of the study and the today workshop will be contributed to development and relevant agencies to take into consideration. Dr. Vannara reminded that workshop that the National Council for Sustainable Development, Ministry of Environment, stated that country members of IPCC (Inter-governmental Panel for Climate Change) have been committed to reduce global warming. Cambodia has been committed for the last decade, and actively since Paris Declaration, to maintain temperature to be less than 2oC by 2050. Even though Cambodia has not been major emitter of GHG, Cambodia shows its commitment to reduce 66 million metric ton of GHG by 2030. Very recently, Cambodia ratified Long Term Neutral Carbon Strategy, including forest, land, and agriculture by 2030. He, also, claimed that Cambodian CC Federation consists of 35 NGOs, which has been working with RGC on CC with 5 aspect: 1) Capacity Building, 2) Sustainable development 3) promote CC study (as one of the today agenda), 4) Consultation on Policy, and 5) Participation from local stakeholders.

Dr. Seak Sophat, Deputy Dean of Faculty of Development at the Royal University of Phnom Penh (RUPP) (online)
His value points of the key note include for the following. Being working for Research Unit of the Royal University of Phnom Penh, he was proud of the study results because the study findings could be referenced to students and other researchers.

Research is one of the pillars of the Research Unit, RUPP, even though lecture and services available within the Research Unit, he claimed. Dr. Sophat admitted the NGOF on supporting the study and underlined that the studies should be based on scientific facts for development and future references. The study could be used for policy development of all relevant stakeholders including government, private sector, and CSO, he stressed. He further noted that all studies should be correct and scientific based.

Ms. Ngin Navirak, National Coordinator, GEF Small Grants Program of UNDP (online)
She was proud of the workshop on Dissemination and Dialogue on the Research Study of People Migration link to Climate Change. Ms. Navirak admitted that, asides from other relevant agencies such as government institution, the findings of the study are very useful for SGP/UNDP for future policy and strategic development.

As indicated by the study findings and recommendations, she supported that migration should be safe; and national strategy should be developed. The SGP/UNDP has been working with RGC, for sometimes now, on this subject matter, she claimed.

Ms. Navirak continued to inform the workshop on background of the SGP/UNDP; and the program will continue to support future projects for community development. She stressed that the SGP started its financial supports since 1992 worldwide while the program was started in Cambodia in 2005. The support is limited to 50,000USD per project for few years of project life; and up to present there are about 200 projects implemented in 21 province and cities in Cambodia with about 20 million USD spent in Cambodia for the last 16 years. The support has oriented on farmer communities, mainly focusing on water, capital, and markets for agricultural products. She underlined that the SGP will continue to support communities to adapt and resilient to Climate Change.

Ms. PARCO Kristin, Chief Mission of International Organization for Migration (IOM) (online)
Ms. Kristin provided precise CC that includes increase in global temperature, floods, and droughts. She gave example of about 1.3 of GDP lost caused by droughts; and in Cambodia droughts badly affected on paddy fields. She concluded that national policies of Cambodia have been also needed to take into consideration for the migration and CC. Cambodia is one of the 6 ASEAN countries affected by CC, she stressed. She mentioned that she met H.E. Sar Kheng, Minster for Interior of the Kingdom of Cambodia, and raised the CC with him; and encouraged Cambodia to take concern on CC to the coming international CC meetings.

She suggested that Conference of the Parties, COP 27 on Climate Change, to be held in Egypt, we should build capacity of Cambodian sectors to cope with CC. Also, adaptation and resilience to CC of Cambodians should be the first step to be built, she claimed. She further hoped that by 2030 all countries, including Cambodia, are strong to cope with CC. NGOs and CSOs are among the important sectors to work on this matter, she underlined.

Mr. Nithi Nesadurai, Director and Regional Coordinator of Climate Action Network of Southeast Asia (CANSEA), (online, from Malaysia)
According to his document, about one million people would be affected by rising sea water level if 1oC of global temperature increased. He claimed that climate induced migration is not only to ASEAN countries, but the world. Mr. Nithi underlined that IPCC (Inter-government Panel for Climate Change) report concludes that Climate Change resilient development prioritizes integrated development. So, take steps of the study recommendations should be important before the problems are too late. He further suggested that for CC, adaptation and resilience should be strengthened in order to reduce migration. He introduced relevant workshops to be coming soon in CANSEA and invited the participants to join and share inputs either online or in persons.

He encouraged the workshop participants to look and take consideration of the Actions of CC adopted at the last COP on CC. He congratulated the workshop and supported the initiative of the NGOF. He thanked for invitation before conclusion of his key note.

H.E. Mr. Srey Vanthuon, Third Committee of the Assembly Representative (online)
On behalf of H.E. Kon Kim, First Chairperson of NCDM, he was proud of the meeting and the results of the meeting on CC of the day. It is shown that all of the participants take CC into consideration in all aspects, he stated. He informed that RGC, the Prime Minister Hun Sen has committed to deal with CC, e.g. NCDM Strategic Plan, 2016 – 2023, to be ready for risk management and responses. The RGC has been taken CC into aspect of sustainable development. Disaster risks include floods, droughts, river bank land slide, and gusty winds. In order to cope with these disaster risks, he believed that all relevant agencies to work with the NCDM to improve governance and livelihoods of the Cambodians. He wished with four Buddhism wishes and declared the meeting closed.