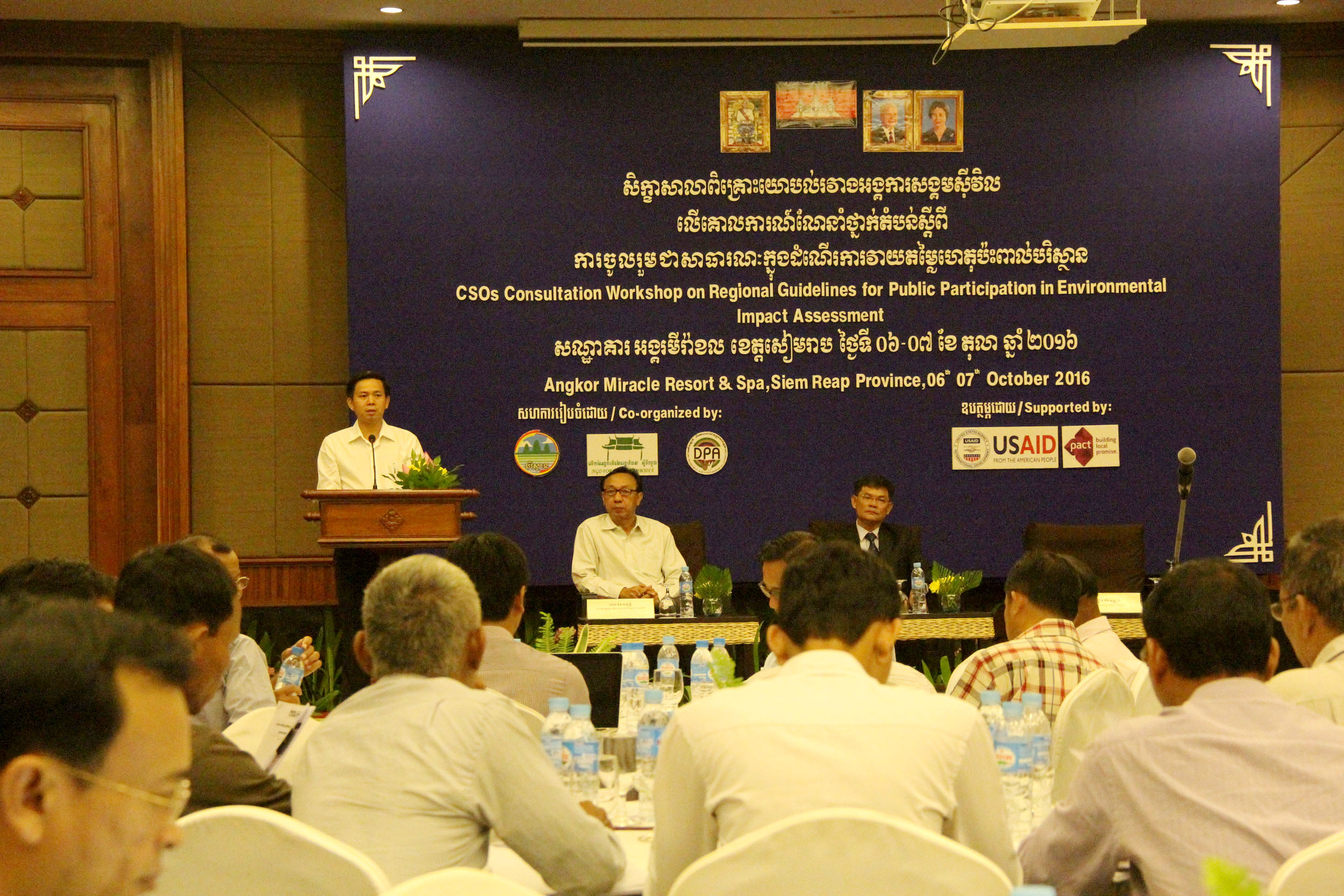 On 06 Oct 2016, Siem Reap Province, Cambodia: In collaboration between NGO Forum on Cambodia (NGOF) Development and Partnership in Action (DPA) and Ministry of Environment, Cambodia, there are 91 participants (25 Female) of NGOs members, youth; EIA consulting and community representatives firm from provinces of Cambodia joint in two days event from 06-07 October 2016 on CSOs Consultative Workshop on Regional Guidelines for Public Participation in Environmental Impact Assessment which fund support by USAID/MPE/PACT in aiming 1) to provide overview of the regional guideline on public participation in the EIA process in the Mekong region; 2) to collect constructive inputs from CSOs and affected communities; and 3) to plan on how to inject the gathered comments into the 1-day national public consultative workshop on public participation in the EIA process which going to conduct by 28 October 2016. 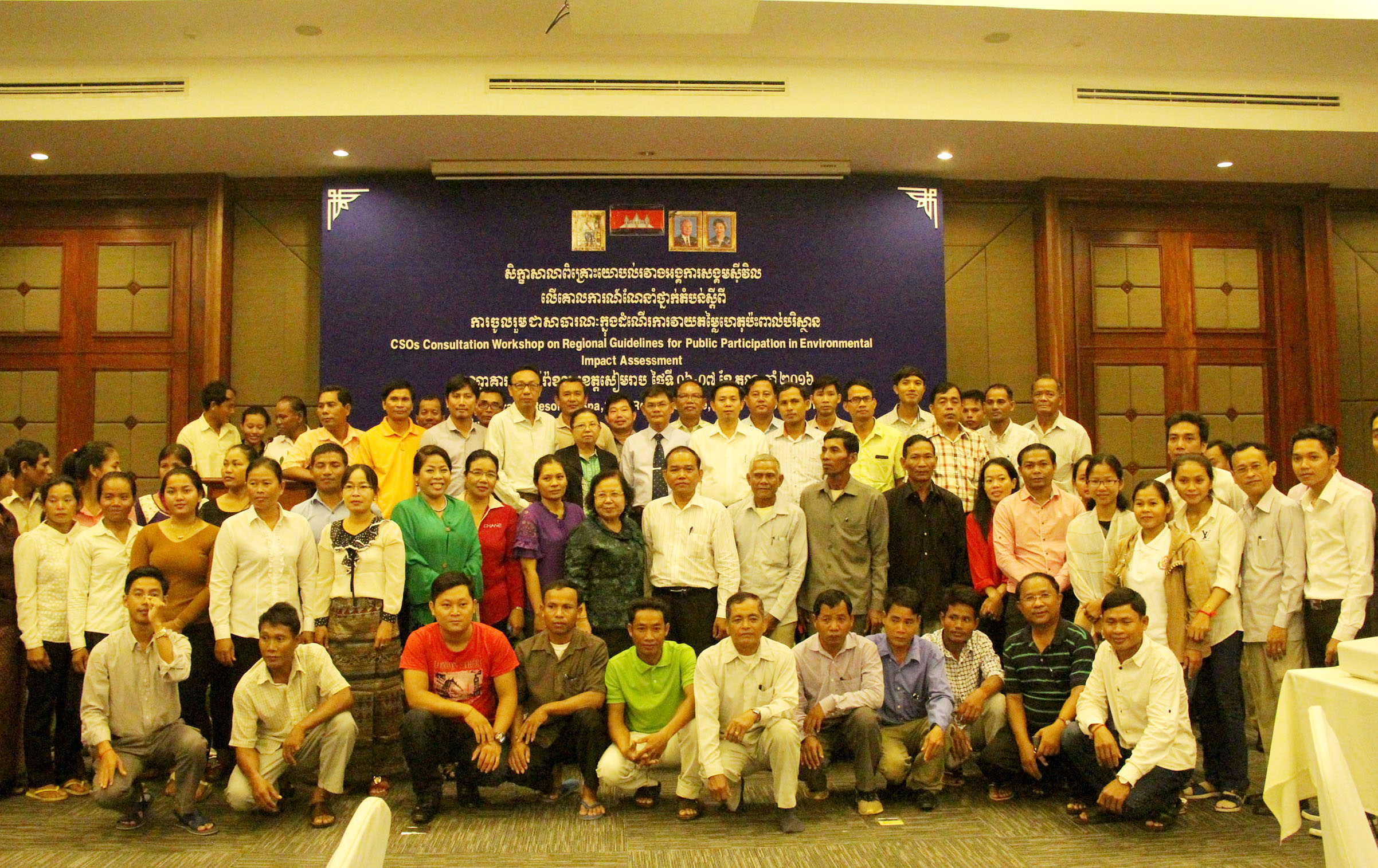 The Draft Regional Guidelines for Public Participation in Environmental Impact Assessment (EIA) have been collaboratively developed by the Regional Technical Working Group (RTWG) on EIA comprised of 25 government and non-government members from Cambodia, Lao PDR, Myanmar, Thailand and Vietnam.

Notice that bases on Mekong EIA Briefing: Environmental Impact Assessment Comparative Analysis in Lower Mekong Countries in 2015 by PACT reported that across the region, there are a number of gaps and weaknesses in public participation in the EIA process. The most common areas of weakness in the current EIA regimes in the region such as 1) under existing laws and regulations, public participation is mostly encouraged but not mandatory, thus in practice public participation is determined by the project proponent 2) Public participation provisions do not mention how the public should be informed about the EIA process, the venue at which the public should gain access to EIA reports, and at which stages of the EIA process the project developers should involve public participation. Guidelines on public consultation are too general concerning what type of methodology and approach shall be used during consultations 3) Legal requirements for the incorporation of public comments and inputs into the EIA reports are not stated (and thus most probably not taken into consideration in the selection of mitigation measures). There is no legal requirement for EIA reports to provide reasons for approval or rejection of public comments (only to list comments as part of a public participation annex to the EIA report) 4) access to project information and EIA reports can be limited. Without clear laws and guidelines for public access to environmental information it is difficult to have effective public consultation and 5) current regulations and guidelines for public consultation and participation in the EIA process generally end when the environmental compliance certificate (ECC) is approved. The lack of attention to the involvement of the public and the role of civil society after EIA report approval when project activities have been authorized to begin in the implementation stage is an outstanding weakness in EIA legislation and policy.

In 2010, the Asian Development Bank (ADB) together with the Asian Environmental Compliance and Enforcement Network (AECEN) identified the main challenges during a regional workshop entitled  Environmental Impact Assessment in Asia: Good Practices and Capacity Needs “at ADB Headquarters in Manila, June 9–10, 2010. During the workshop, participants identified the main capacity challenges within the region, including the following 1) Quality of EIAs – the quality of EIA consultants is currently not adequate. EIAs are not conducted with enough focus. As a result, there is a need to develop a set of objective criteria for selecting consultants. In addition, there were not enough staff to review submitted EIA reports. Better review criteria also need to be developed to assist the review process 2) Public participation – current EIA practices generally do not engage the public properly and 3) Official review – genuine public concerns are not adequately addressed, leading to the lack of community acceptance and continuing opposition to development projects. The involvement of NGOs and other representatives of civil society need to be increased especially for complex projects.