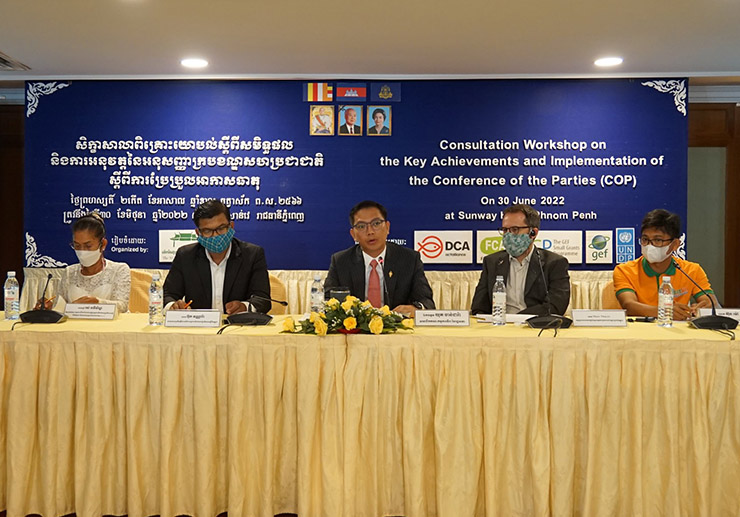 The NGOF/NECA, consists of 35 NGO, network members and partners, has been working together to solving the environmental problem in Cambodia with government, policy makers and relevant stakeholders. For the purpose of discuss and share experiences and information about addressing concerns and challenges regarding to climate change and environmental issue in Cambodia and in the regions, the NGOF/NECA organized a consultation workshop on key achievement of COP 26 in order to share and update progress, and review key achievements among the networks. The workshop was organized as hybrid meeting, in-person at Sunway Hotel and on Zoom held on 30th June 2022 from 08:30 to 12:00.
The Objectives of the workshop are:
• Share on works and joint actions from relevant stakeholders to address climate change issues in Cambodia;
• Reflect the progress and key achievements as well as challenges of COP 26 among academic, private sector, government and CSO;
• Discuss and collect the inputs, needs, concerns of all relevant stakeholders for development of the joint statement for COP 27.

Dr. TEK Vannara, Executive Director of NGOF, he noted that Cambodia has shown much efforts on coping CC including REDD+ (Reduce Emission from Deforestation and forest Degradation) implementation. He underlined that the work of the day would collect comments from the participants as inputs for COP 27. He underlined that Green Funding for CC was 130 thousand billion USD. Private companies had shown their commitment for the Green Funding, he admired. Standardization of CO2 emission calculation for all business around the world has been made. In the same time, there are mechanisms for rewarding to those companies who had committed to the COP agreement, e.g. Paris Agreement (2015), he stressed.

The Paris agreement delivered the Rulebook that requests all signatory countries should commit their efforts to reach 1.5oC. The COP 26 requested to reduce as much as possible using coal (mineral coal). By 2030 is targeted for SDG (Sustainable Development Goal).

Dr. Vannara, also, recognized the lack of fund commitment to deliver 130 thousand billion USD because of some other matters of the developed countries. He noted that the funds are proposed for CC adaptation. He mentioned that Mr. Se Bunleng, researcher, will detail on findings of study on COP 26 implementation and achievement. He believed that the workshop will provide valuable inputs for CC adaptation measures for Cambodia development. Dr. Vannara ended his welcome remarks by wishing all the participants healthy and successes.

Mr. Mark Thayre, Deputy Head, Mission of UK Embassy, stated that it is not too late to stop CC. He further noted that Cambodia signed up Green Initiative Issues while COP 26 shows many issues. He, also, stressed that carbon markets should be implemented in Cambodia. He announced that the UK committed $14bn per year for CC supports to countries worldwide to cope with CC, especially in Cambodia. The supports include clean transport, adaptation and biodiversity conservation. Particular supports to Cambodia are the supports to local communities to protect and improve their livelihoods.
He ended his keynote by applauding the NGOF for its efforts on mobilizing stakeholders to work together for coping CC. We still need more discussions on how to cope with, adapt, and mitigate CC, he stressed. He noted that government has key roles in this aspect. Finally, he encouraged the participants to provide and collect inputs for COP 27. He thanked the workshop organizer for the active event.

H.E. Khut Chandara, Representative of the Third Commission of the National Assembly
He underlined that CC is determined as inter-aspect sectors of Cambodia, so, we all are responsible to commit efforts to cope with the changes of climate. Being one of the members of the COP 26, Cambodia had committed to work together with the world for CC reduction. He noted that according to MoE: 64.6 million metric ton of carbon will be reduced by 2030. Cambodia has provided long-term plan on CC: by 2050 Cambodia will have zero (0) carbon emission, he stressed. For instance, Cambodia committed to work on hydropower and solar power, he said. He, further underlined that Cambodia will not create coal electricity till 2050. He encouraged the NGOF and its networks to continue to work on CC adaptation and mitigation for the world environmental friendly.