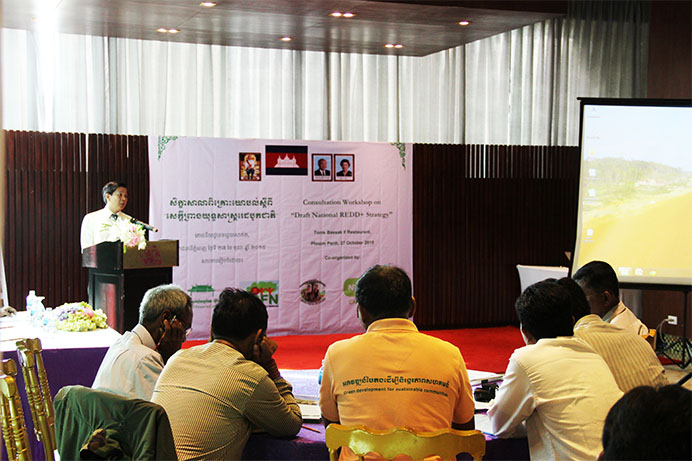 Phnom Penh, October 27, 2015: A total of 53 participants attended the Consultation Workshop on “National REDD+ Strategy”, organized by NGO Forum on Cambodia (NGOF) in collaboration with CSOs REDD+ Network in Cambodia including NTFP-EP and CIYA, in order collect inputs and recommendation in the final draft National REDD+ Strategy among key NGOs/CSOs including IPs, development partners and local communities at Tonle Bassac 2 Restaurant.

The specific goals of this event were:

Currently, the Cambodia REDD+ program, Forestry Administration and Fishery Administration of MAFF and GDACP of MOE, are in process of development of National REDD+ Strategy (NRS) and consultation with relevant stakeholders including government ministries, NGOs/CSOs, Development Partners, IPs and local communities. The sub-national consultation meetings on 4th draft of NRS were conducted in 4 regions in September 2015. The participants in the sub-national consultation meetings were relevant stakeholders including provincial departments, local NGOs/CBO, IPs and local communities. The Royal Government of Cambodia aims to complete the national REDD+ strategy by November 2015 and present at the 21st Conference of the Parties (COP21) in November/ December in 2015.

Dr. Tek Vannara, NGOF’s Executive Director, expressed that REDD+ is the mechanism for climate change adaptation and mitigation and will be finalized at the national workshop during mid-November 2015 and approved by Ministry of Environment and Ministry of Agriculture Fisheries and Forestry’s ministers. “Hence, I encourage all participants to be actively involved to provide comment and feedback to this draft strategy and follow up the progress, the officially opened the consultation workshop on to floor,” he added.

The draft NRS aims to improve the functioning and capacity of national and sub-national forest management institutions and its relevant institutions to strengthen implementation of existing policies, laws, and regulations for reducing emissions from deforestation, forest degradation, sustainable forest management, and enhancement and conservation of forest carbon stock.

As the results, the inputs and comments from NGOs/CSOs, forestry communities and IPs of NRS will documented and send to REDD+ Taskforce Secretariat for incorporated in the final draft. It is expected that the inputs/recommendation are contributing to sustainable forest resource management and reducing emission from deforestation and forest degradation.