This project brings together local and international NGOs, government agencies, researchers, environmentalists, educators and students. It promotes awareness of climate change impacts and adaptation strategies. It also strengthens the capacity and skills of NGOs to effectively advocate for best practice adaptations to be used to benefit poor and vulnerable communities.

The project works through the NGO Environment and Climate Change Alliance (NECA). It shares and discusses environmental issues arising from development that may affect the environment and community livelihoods and rights. Through Alliance members, the project gives communities a voice to influence policy-makers to be more accountable.
In 2012-2014 the Climate Change Policy Monitoring project is continuing the work outlined above, but also strengthening the capacity of NGOs/CSOs to:

A sensitivity to gender roles and women’s rights runs across all areas of the project.

Climate change is a key issue for Cambodia

Climate change is a challenge for economic development and the eradication of poverty in Cambodia. Climate change may lead to more rain (and more floods) in the wet season, less rain in the dry season, and hotter temperatures. Communities may be more exposed to natural disasters and shortages of food and clean water.
Most communities are unprepared for extreme climate events and have little adaptation capacity. Most Cambodian farmers have not changed their practices due to resource constraints, risk aversion, a lack of technical assistance and information, and lack of crop insurance. There is a shortage of good information available locally, especially in the khmer language.

Major initatives around climate change have been launched

CSOs and NGOs are encouraged to participate as providers of services and goods in various investment projects of the Strategic Program for Climate Resilience. Phase One provided $1.5 million to facilitate the development of a cross-sectoral approach to climate resilience. Phase Two, valued at nearly $105 million, includes some support for policy reform and institutional capacity building, but the majority of the funds will be used to ‘climate proof’ Asian Development Bank projects.

The Cambodia Climate Change Alliance Trust Fund has been established within the Cambodia Climate Change Alliance as an engagement point for development partners and donors to provide resources for climate change capacity building at national and local government level. The Alliance is funded by the EU, Sida, Danida and UNDP. Key line ministries, agencies and CSOs have access to financial and technical resources to design, implement and monitor climate change adaptation interventions.
The Strategic Program for Climate Resilience is funded by the Pilot Program for Climate Resilience, a body that aims to create strategies for engaging civil society. This was managed in Cambodia by the World Bank and then by the Asian Development Bank.

The National Committee on Climate Change is tasked with developing a policy and integrating climate change into other relevant policies, strategies, legal instruments, plans and programmes. At the moment, however, there is poor coordination in planning process and implementation between government bodies. There is no environmental impact assessment law – only the environmental impact assessment (EIA) sub-decree has been finalized.
New hydro and coal-fired power projects pose potential hazards such as flood and drought and greenhouse gas emissions, but inter-ministry dialogue does not always consider these.

The traditional centralized approach still prevails in planning and decision-making with limited participation, particularly from local and grassroots levels.
The government has allocated small budgets to implement climate change projects, but there are very limited financial, human and technical resources for this work.
While many adaptation projects include a capacity-building component, few capitalize on the existing knowledge of local communities or the networks and capabilities of civil society groups. All levels, from remote villages to central government, require a better understanding of their roles and a greater capacity to strategise, co-operate, monitor and respond to the impact of climate change.

There are challenges around external funding

A UNDP study found that overseas development aid to environment and conservation in Cambodia decreased from $19.6 million to $7.6 million between 2004 and 2008. However, development partners have made pledges of $96 million for climate change work in Cambodia.

Most climate-change project funding has been sourced by development partners or international NGOs, rather than applied for directly by the government or local organisations. This raises the issue of country ownership of these initiatives, which is critical for effective project implementation and requires close attention as increasing levels of climate-change funds enter the country.

Activities have been identified and prioritized based on available external funding rather than national budget and development needs. Reliance on external funding and poor coordination frequently results in fragmented development. In addition, many donor-driven projects do not take into consideration local capacity to sustain operations over time.
Project background

Over 2009–2011, the Climate Change Policy Monitoring project mainstreamed climate change issues into other projects and programmes within NGO Forum.

Achievements in recent years have included: 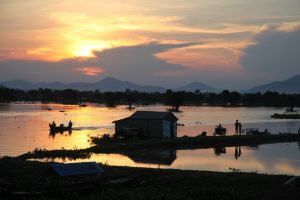