Two important topics were placed on the debating table. The first one was the “Forest decentralization could enhancing local livelihoods and ensuring effective forest management within Prey Lang Landscape” and the “Forest Privatization in Prey Lang contributes toward poverty reduction and sustainable development”.

Approximately 300 university students attended this event, organized by young people who aim to protect the remaining Prey Lang, to learn and gain more knowledge about the Prey Lang deforestation in Cambodia

Dr. Tek Vannara contributed that sustainable Prey Lang meant the sustainability of fishery resource, agriculture system, tourism, environment, temples and welfares of people who living in and around Tone Sap River, and the organizing of this event did make such at impact to the society because both youth and deforestation got a lot of attention from the public now.

“Preserve Prey Lang (forest) is saving lives, and I’m very delighted for the youth initiative to protect our forest. I’m very positive that this event is going to make the different in our society and while the youth could learn to understand more about Prey Lang, I hope the government and public will pay more attention for proper action to stop illegal logging,” he stated his thought.

After debating between four youth groups, who had a chance to gain first-hand experience by visiting Prey Lang. A group of two that had researched extensively in Prey Lang for about couple weeks prior to the debate, won the competition. Winners’ were namely Seng Kanharith and Rim Phatbophaphoung.

“We did the research very carefully during our visit to the forest. It was a heartbreaking moment for us to witness the loss of many huge trees, we then acknowledge that we need to be a part to solve this problem,” and Kanharith. “If we do not take any action today, we might not have Prey Lang to show our younger generation anymore.”

Prey Lang is considered to be one of Southeast Asia’s last remaining lowland evergreen forests, covering over 3,600 square kilometers of land. The forest stretches over four provinces: Preah Vihear, Kratie, Kampong Thom, and Steung Treng and is now under threat from major illegal logging activities. 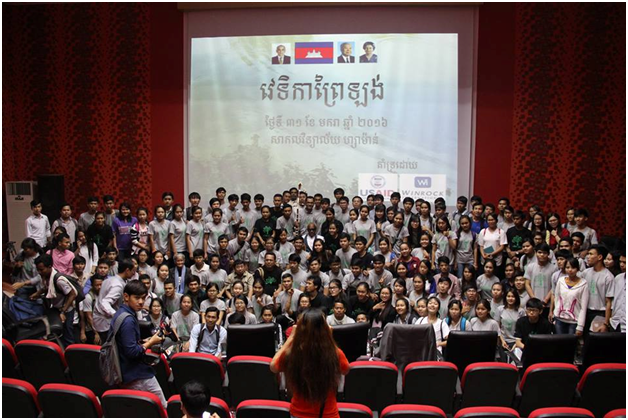