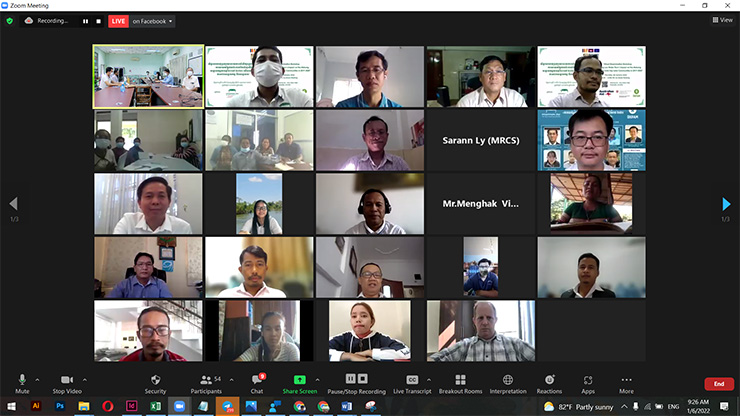 For the half-day of the 6th January 2022, there was a Webinar meeting organized by the NGO Forum on Cambodia (NGOF) to present findings of the study on “assessing the Impacts of Low Water Flow on the Mekong Riverine and Tonle Sap Lake Communities”. The study was financially supported by Oxfam Cambodia and NGOF in 2021. Findings have been consulted for comments and consolidated for final study report till the event of the meeting. The Webinar meeting was for the last chance of comments, if any, from key relevant stakeholder agencies. The objectives of the meeting are:
1. To disseminate the findings to the relevant stakeholders and policy recommendations to inform policy discussion in the future.
2. To organize a round table discussion with all relevant key stakeholders to understand a possible ways to minimize and mitigate the impacts.

The results of the meeting are classified into three (03) parts: Key Notes, presentation, and discussion (Questions and Answers). There were 54 participants from various agencies including government, communities, and NGO participated the meeting. Key notes were presented by Mrs. Luy Reaksmey (CEPA), Sok Khim (Oxfam Cambodia), and moderated by Dr. Tek Vannara (NGOF).

The study findings are classified into two documents: the technical findings report and policy recommendation report. There are lots of concerns regarding hydro-dams of the upper Mekong River and development programs in Cambodia that have negatively affected on water flow of the river and the Lake. Explanations and concerns were, also, presented by expertized agencies such as CNMC, MRC, IUCN, WWF, and Tonle Sap Authority.

In addition, there are many study subjects raised during the discussion session, which are for possible future studies. They are cause-and-effects of water levels, aquatic biodiversity abundance and water resources management. Don Sahong dam is the closest dam to Cambodia, which should be the first to study for its impacts to the Mekong River and its tributaries. The meeting is useful for the participants to share their experiences and information on the subjects and sharing sources of data like website addresses, stated. Dr. Vannara. In addition, Dr. Vannara announced that the study was officially endorsed and will be available on the NGOF websites soon.

She announced that she was proud of being invited to the meeting to discuss on the findings of the study entitled “assessing the Impacts of Low Water Flow on the Mekong Riverine and Tonle Sap Lake Communities”. She emphasized that the findings are to:
• Inform all relevant stakeholders to rethink on the impacts on the riverine systems and on the communities of the areas; and
• Make proper policies for the changes in the water flows.
She, also, took notes that the study faced difficulties such as restriction during Covid-19 times, but luckily the study was actively collaborated by relevant agencies such as Tonle Sap Authority.

He notified to the participants that the meeting is to disseminate findings of the study financially supported by Oxfam Cambodia and NGOF. The study was conducted by a professional team called GREEN ENVIRO-SULT CAMBODIA (GESC). CO., LTD. He underlined that the study has specific objectives, to be presented by the study team shortly, that the participants should pay attentions on while providing their comments. Because the study was for one year of 2020, Mr. Khim, also, acknowledged that the study period of time was definitely short for the context of water flow regime, even though lots of secondary data were reviewed.

He encouraged the participants to discuss the findings of the study in order to incorporate new comments into national policies to better reduce the impacts and help improve livelihoods of local communities of the Tonle Sap Lake and Mekong River areas. Mr. Khim further stressed that detail policy recommendations, as the results of the study, will be brought in for discussions by Dr. Tek Vannara, NGOF at the later stage of the sessions.

Mr. Sok Khim thanked all the participants for their time and active engagement, especially those participants from government agencies, and finally, he opened the meeting for the day.

WRAP UP RESULTS AND CLOSING SPEECH
Dr. Tek Vannara, Executive Director of NGOF thanked all representatives of different agencies, communities, research institutions, and CSO, for their participations in the meeting and actively discussed and comments for improvement of the study and policy recommendations. The study team will consolidate all the comments into the findings and be available soon for reference. He noted that the findings are based on objectives and method of the study. He summarized thoughts from the meeting for future possible studies regarding water levels, aquatic biodiversity and water resources. He, then, accepted all the thoughts for future considerations. He notified that Don Sahong dam is the closest to Cambodia, which should be the first to study for its impacts to the Mekong River and its tributaries. The meeting is useful for the participants to share their experiences and information on the subjects and sharing sources of data like website addresses, he stated. Dr. Vannara, finally, thanked all the participants for their continuous active participations and closed the session with all the best wishes and announced that the study is officially endorsed.