Mondolkiri, April 26 -28, 2014: Deforestation and Illegal logging from Economic Land Concessions (ELCs) – which have been happening many years ago – are the concerned issues in Mondulkiri as the cases are getting worst from day to day. As being witnessed on the circumstances also in response to the needs of the Indigenous People (IP) over their livelihood difficulties caused by the dispute between granted companies and IP in Mondulkiri, a group of national and international media such as Phnom Penh Post, Radio Free Asia, Voice of America, ABC Radio Australia, Voice of Democracy, Thmey Thmey and CEN websites, accompanied by CSOs working group, joined together for a three-day media trip to spot the deforestation and illegal logging in Pu Kong and Sre Ampel villages, Keo Seima district, Mondukiri province.

In Pu Kong commune, IPs are in dispute with Sovan Reachsey company while in Srae Ampel commune are facing with Bin Fuerk I – company that has been granted an ELC since October 2011. Otherwise, there has never been a proper solution from the local auothurities neither does the government upon their conflicts.

“Forest is our life, in particular, resin tree is a noteworthy natural resource in generating income to support our community’s livelihood, but now the companies have destroyed over 80 percent of all the resin trees that we have,” said by Vannak Khleurk, member of an indigenous group from Srae Ampil village, Keo Seima, Mondolkiri, whose livelihood is also exaggerated by Economic Land Concessions (ELCs).

To reassure that their problems are no longer beeing kept in the box, in the morning of May 28, around 200 IP from 25 communities decided to gather in front of Mondulkiri provincial hall to sumit the petition and their file of complain on the forestry destroying cases by the ELC companies to the authorities.

“There’s no need to offer us gifts. We can live on our own. Please leave the forest for us,” said Poeut Sovann, a Phnong woman who has patrolled the forest around Sen Monorom town for years to protect it from illegal loggers in front of the provincial hall. “We do not need clean roads and schools. If we have them, we lose everything,” she added. (Source: PPP – May 6)

In the same morning, 10 IP representatives alongside the media team were invited by the deputy provincial governor of Mondulkiri, Yim Louch, for the discussion on the subjects. As a result from around 3 hours meeting, the deputy provincial governor admitted that there are loggings in this territory, otherwise, it is considered legal because the government has given companies the ELC. “Still, I am going to bring all your concerns to talk over within our team and decision makers and we will later inform back regarding the result,” Yim Louch added.

During and after the campaign, around 16 media articles had covered the case and being published and to various audiences comprising of government, development partners, local and international citizens. 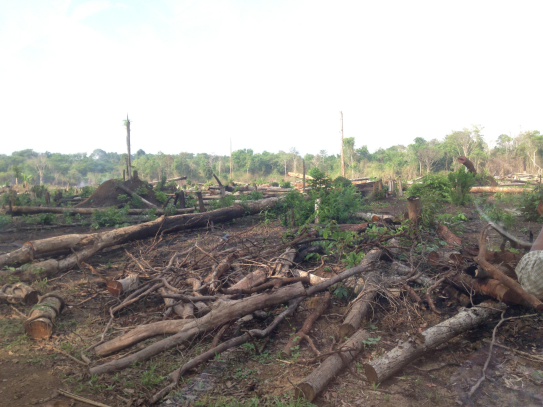