Phnom Penh, May 2015 to present: Following Cambodian Prime Minister announcement in early April 2015, a group of local and international NGOs started working on the draft Law of Associations and Non-Government Organizations (LANGO) urging for the proper consultation workshop from the government to work on various concerns issues of the 4th draft LANGO they received since 2011.

Vital different activities have been token place since April 2015 included official launching of the Stop and Consult Social Media, press conferences, joint statements and other letter issues by embassies and donors, CSOs consultation workshop to discuss on LANGO, official meeting with members of National Assembly (NA) and Senate – both CNRP and CPP representatives – and the LANGO regional workshops in 24 cities/provinces of Cambodia to raise awareness about LANGO to the grassroots, communities, especially NGOs based in the provinces.

Throughout the campaign, CSOs group suggested Cambodian government to:

Otherwise, after about 2 months advocate for the transparency of the LANGO, NA, represented by H.E Chheang Vun, called for an urgent meeting on LANGO called, “The National Workshop on Understanding on LANGO”, on July 8, 2015 at the NA. A half day workshop was indeed attended by hundreds of participants from CSOs, NOGs, government, associations and media, in which resulted in shortage time for questions and answers by participants.

Dr. Tek Vannara said during the press conference right after the National workshop that this is not a proper consultation workshop, since the participants, especially, associations and NGOs did not have enough opportunity to ask questions either to share our concerns. “We urge the government to postpone the Adoption of the LANGO, and give us as least three months for the proper consultation workshop on LANGO,” he said. “In other case, we, the CSO/NGO group, do not accept this current NGO Law.” Paying attention to the NGO and association concerns, LANGO was adopted by NA on July 13, 2015.

The draft LANGO was later sent to Senate to be adopted on July 24, while hundreds of participants from communities, associations, CSO/NGO members assembled in front the Senate to call for dropping the law and revert to NA for the content changing.

“The next step is the king,” Dr. Tek Vannara said. Right after the adoption on the law by Senate, CSO team working on LANGO is now in the process to create the joint statement and later on send to the King asking for the intervention and request him to hold on to the signature on this law until the proper consultation process is being conducted between the government and the related stakeholders.

By Aug 3, there were 186 local and international organization endorsed on the LANGO Joint Statement to Cambodian King. 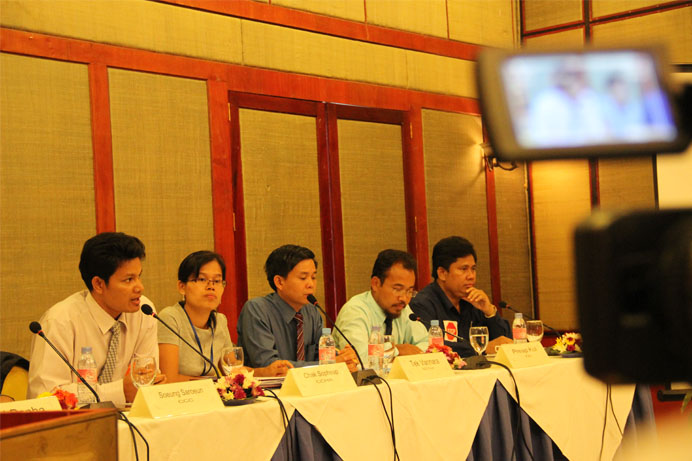