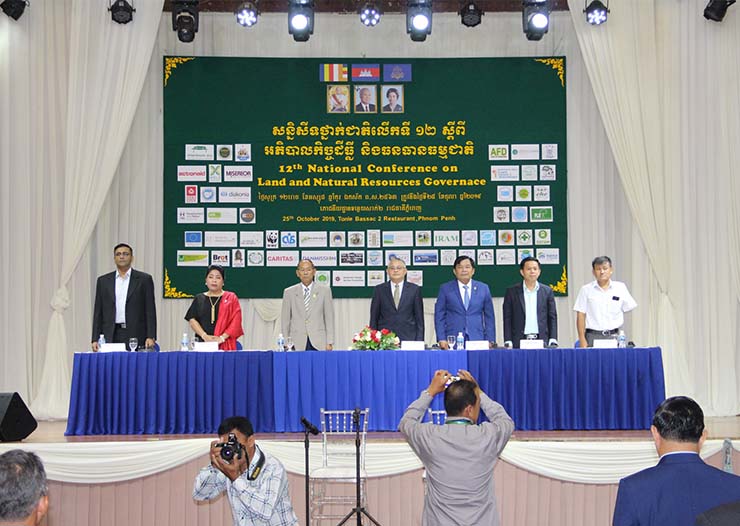 After paying great respect to the chairman of the conference, Dr. Tek Vannara, Executive Director of NGO Forum on Cambodia, thanked the representatives of the RGC and the parliaments for attending the morning session. He emphasized that the discussions at the conference should be honest and constructive. He raised the main topics of the conference including Indigenous Peoples and Forest Management, Land Policy and Governance, and Natural Resource Governance. The Royal Government of Cambodia national policies include the NSDP (2019 – 2023) SDG (2016 – 2030), the Green Growth Policy and the Fourth Revolution of the Digital Age.

Dr. Vannara suggested some following important points for the communities:

Mr. Biju Abraham, Representative of Oxfam, noted that Cambodia mainly focuses on economic growth and poverty reduction. Economic growth is very much related to land uses and land governance. At the same time, we are facing the challenge of climate change and natural resource degradation. In other words, all of these factors (economic growth, climate change, natural resources and national policies) are interrelated. At the same time, Cambodia has seen a rapid growth in population, which demands high food demand year after year. Oxfam also has programs in this regard. The programs implemented by Oxfam include:
• Climate Change
• Immigration
• Technology and Innovation
• Gender and Justice.

Ms. Chhim Ratana – Senior officer of ActionAid – summarized the results of the two-day conference as the following. On the 24th of October 2019, we achieved the pre-meeting with the three main statements on Land Management, Resettlement, and Natural Resources. The sector of Natural Resources is divided into three sub-themes including Indigenous People, Community Forestry and Community Fisheries. Each statement consists of four main sessions including achievements made by the Royal Government of Cambodia, Challenges, Suggestions, and Recommendations. The 12th National Conference was participated by 518 participants (160 women) represented from 61 NGOs and communities across the country. Speakers represented the Royal Government of Cambodia agreed to resolve or will bring the raised challenges to as highest possible decision-makers for further intervention.

Dr. Tek Vannara – Executive Director of the NGO Forum on Cambodia – and being as representative of all the Conference participants, officially handed-over the written results of the Conference to H.E. Ngan Chamroeun, Secretary of State and highly Representative of H.E. Samdech Kralahom Sar Kheng, Deputy Prime Minister and the Minister of Interior.

H.E. Ngnan Chamroeun – Secretary of State, Ministry of Interior (MoI), and on behalf of H.E. Samdech Kralahom Sar Kheng, Deputy Prime Minister and the Minister of Interior. His Excellency provided his remarks as the following.

The Royal Government has given Land Management as the first priority of its mandates. There is a Sub-Decree on Land Management dated since 2009. There are 137 registered with Communal Land Titles (CLT) by the Minister of Interior. It is noticed that the Ministry of Rural Development (MRD) is responsible for the registration of Indigenous People (IP) identification. After the recognition of the MRD, the Minister of Interior will register the IPs’ CLT.

The Royal Government of Cambodia has been committed to better manage the country natural resources. For instance, the biodiversity of Keo Seima Wildlife Sanctuary of Mondulkiri province has been well protected. All seized illegal offended tools and equipment were destroyed. We also recognize the roles of sub-national authorities, communities, and partner agencies in the protection of natural resources. The Royal Government of Cambodia has been taken important tasks on the amendment of three laws, forestry, fisheries, and protected areas. The proposed amended new laws would give more opportunities to wider participate from different agencies rather than just the responsible ministries like agriculture, forestry and fisheries, and ministry of environment. The initiative of the amendment of the laws was started in 2011 by Samdech Akkak Moha Sena Padei Techo Hun Sen, the prime minister of the Royal Government of Cambodia. Parallel with the ideas of decentralized management of the natural resources, his Excellency gave experiences achieved by the authorities of Germany.

The Conference recommended continuing to hold the National Conference annually with wider participation from the public institutions. The Discussion Groups should be smaller, around 10 people in each group (rather than about 30 people), for more efficient discussion. The recommendations could be synthesized at the later stage for the Conference. While keeping the Pre-meeting for one-day, as the same as this one, the future National Conference should be two days in order to give more time to speakers to comprehensively share their experiences and knowledge instead of one day as already held.