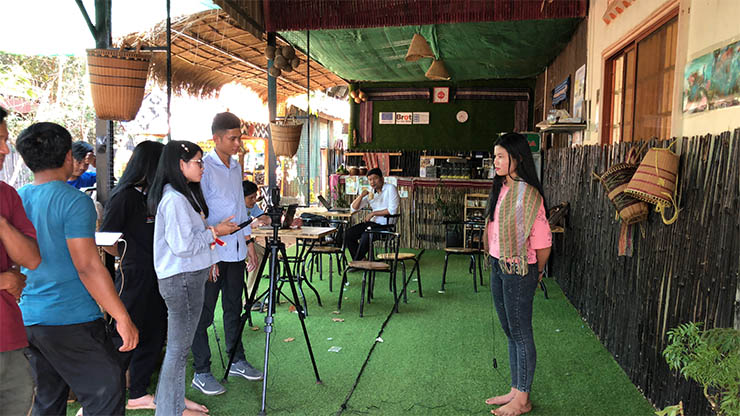 The NGO Forum on Cambodia (NGOF), under the fund support from OXFAM Cambodia to implement the project entitled” Promote Citizen’s Participation in the Public Spending” which will be implemented in two target provinces: Siem Reap and Ratanakiri. Based on the agreement, the NGOF will implement the series of activities including, capacity building, research, dialogue and budget monitoring…etc. On 24th-25th February 2020, the NGOF cooperated with the provincial NGO network, provided the Refresher training on National and Sub-national budget to the existing NGO network members and youths in Ratanakiri Province. There were 20 provincial NGO network members and youths participated in this training.
Training Objective:
• To provide basic perception of National and Sub-national budget
• To refresher knowledge on National and Sub-national budget
• Support NGO network members and youths to monitor budgetary process and expenditure
• To provide basic understanding on video editing
• Understand how to produce video with good quality

Mr. Keo Bunly welcomed trainees by introducing briefly about the project entitle” Promote Citizen Participate in Public Spending”. He stated that to implement the project successfully, we have to work with existing NGO networks include Budget Working Group (BWG). The BWG has been working on monitoring the government budget allocation at both national and sub-national levels in with transparency and accountability especially promote citizen to engage in sub-national expenditures. This project will be implemented in Ratanakiri and Siem Reap provinces. The project intends the Ministry of Interior (MoI) and Ministry of Economy and Finance (MEF) to contribute in promoting citizen to participate in public spending.

To take apart with the government, BWG, CSO as well as youths have to be well equipped themselves with sufficient knowledge of national and sub-national budget. Furthermore, the project outcome was to influence government increase more space for citizen CSO and youths for policy dialogue and encourage youths to raise their concerns through producing evidence based including videos or case studies.

Mr. Mot Pisey opened speech that some of the youths in his community used to do research about sub-national budget because it was very important for citizen. The understanding of national and sub-national budget, citizen will be able to join monitoring the government budget expenditures for sub-national administration with transparency and accountability especially produce the supportive evidences before accusing the government of spending money without transparency and accountability.

In the afternoon session, Mr. Phourn Yu, Media and Communication Coordinator of NGOF, introduced the participants on video training. This session all the participants practiced on how to set up camera, choose the video quality option before taking the video. Furthermore, they acknowledge and know the form of video such as VOX POP, Frame Rate and B-ROLL. VOX POP video form refers to video which used the questionnaires to interview the audience on a specific topic. The second day, participants was divided into two groups to play role, practical video taking and video editing on Adobe Premiere.