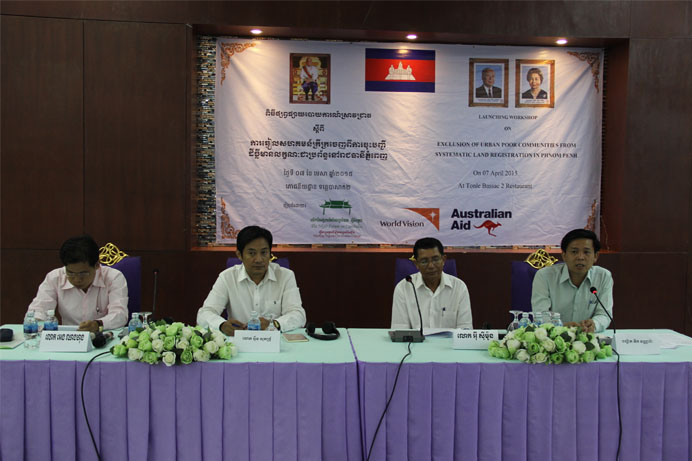 The report, which was finished in January 2015 interviewed over 300 people from 12 urban poor communities, was a joint project between the NGO Forum on Cambodia (NGOF) and World Vision Cambodia (WVC). The specific purposes of this report were :

“The report has been produced in two languages – English and Khmer – because we want to ensure the research reaches local and international audiences. The report exists because CSOs/NGOs have observed that in Phnom Penh, the poor have very limted access to information. Additionally, there is no formal complaint mechanism for the people who were excluded from SLR .Currently, there is no data available on the prevalence of exclusion from the SLR process, which makes any assessment on the issue of land registration difficult,” said Dr. Tek Vannara, NGOF’s Executive Director.

In Phnom Penh, many urban poor communities (UPCs) located in areas where land is valued at significantly higher rates, and therefore more likely to be contested, remain absent from the registry, the report, commissioned by the NGO Forum of Cambodia and World Vision, found.

“We’re seeking to understand the reason for the exclusion of these UPCs and the impact it has on the people,” said NGO Forum research officer Sao Vicheka. “These are our findings so far, and in the future, we want to develop a solution to help the poor communities on these lands,” she added “But this is the first step.”

Systematic land registration (SLR) was initially supported by Land Management and Administration Project (LMAP), which originally focused on 10 provinces and Phnom Penh City. This project ended in 2009, but SLR continues to operate under​​the Land Administration Sub-Sector Program (LASSP) and is active in 15 of Cambodia’s 24 provinces, plus the capital.[1] The Total land number of land titles delivered from 2003 to end of September 2011 was 1,740,839 titles while the figure for land titles issued in Phnom Penh was only 62,934.[2] In addition to land registration, the government has set up another new action for land registration which is called “Directive 01” and this program had issued approixmalety 380,000 land titles by June 20, 2013.[3]

There were high levels of exclusion from the SLR process and there were also a number of disputes involving households in conflict with one or two powerful and well-connected actors in the urban areas in Phnom Penh.[4]These exclusions took place in the absence of any clear legal process. The legal framework for SLR contains no legal provisions for excising areas from adjudication areas because they are “too complex” to adjudicate, and thus it is not clear what legal justification there is for such exclusions.

The reports in Khmer and English versions can be found and downloaded here: