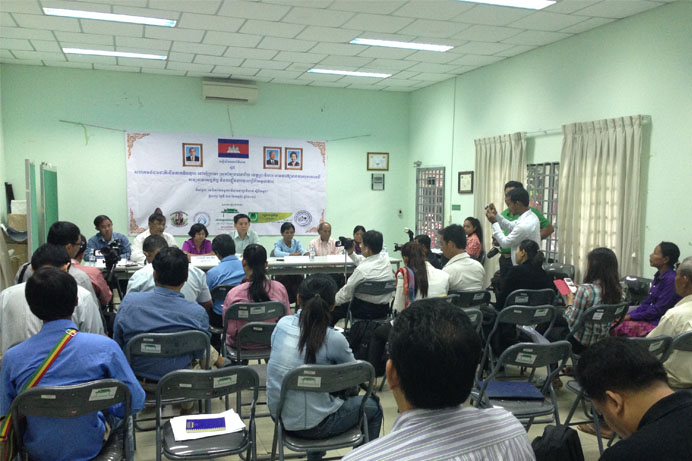 Phnom Penh, July 23, 2014: Group of Kuoy Indigenous from Prame Communities joined together for a press conference to call for support to the cancellation of the Economic Land Concession at the NGO Forum on Cambodia office. Taking that opportunity, the ethic peoples  also followed up on the letter issued by the Ministry of Interior on February 27, 2014  ordered provincial authorities to take proper and just action on land conflict resolution and accelerating Communal Land Titles for the three communities. The indigenous groups also revealed and followed up the promise of H.E. Suos Yara, Preah Vihear’s lawmaker, on April 4, 2014 in intervening their land dispute case.

During the conference, the representatives of 367 aboriginal families from three communities in Preah Vihear shared their concerns on the companies’ activities in occupying and using their forest and land. The instant they received the ELC from the government, the two companies Lan Feng (received 9,015HA) and Rui Feng (received 8,841HA) Concessions in November 2011, they started cutting the trees belonging to the villagers without a proper Environment Impact Assessment. The inhabitants added that they often received the letters from the court upon their advocacy activities to urge for acceptable solution from the government.

“Instead of helping our villagers, after the companies destroyed our houses, farms and forest, the local authorities and military were indeed arrested our representatives who advocated for rights, and gave us two unacceptable choices. Those two options are either our ethnic group choose to switch our land with cash or land for land,” said Ms. Tep Tem, Community Member from Prame Community. “On the other hand, how can we take our property to trade with our property? We do not want money from them; we just want our communal land back. Please all the local authorities and the government give us justice and stop threatening us. Even though we are indigenous people, we also have hearts and we do hurt,” she added.

“The ethnic group formed the press conference because they need justice. They want to call for help from the government over the forestry destroying by the ELC companies that underway few years ago without apposite observation and monitoring from the local authorities. Meanwhile, they also requested speeding up of their Communal Land Titles for the three indigenous communities, Prame, Sre Preang and Bos Thom. After the third time conference on Prame case, we hope the government starts recognizing on this problem and take any quick action to solve it for those affected people,” Mr. Tek Vannara, Executive Director of the NGO Forum shared in the course of the conference.

According to Royal Gazette published by Council Ministry, up to 2014, the Royal Government has provided about 227,000 hectares of ELC to 34 companies to invest on agro-industrial in Preah Vihear Province. Two companies midst them are functioning in Prame Commune.

This press conference is organized by The NGO Forum partnered with Ponlork Khmer and Adhoc organizations.