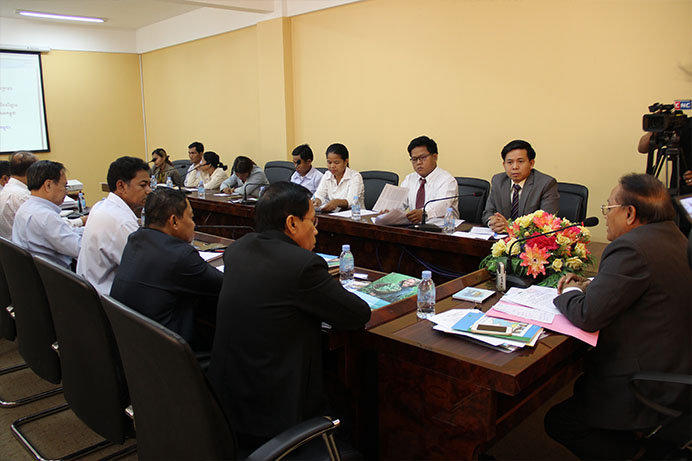 Phnom Penh, June 30, 2015: Chaired by H.E Ith Prang, Secretariats of Ministry of Mines and Energy (MME), the meeting ever between the MME, River Coalition of Cambodia (RCC), facilitated by the NGO Forum on Cambodia (NGOF) and the Lower Sesan 2 Community representatives was conducted at the Ministry office.

Approximately 30 participants attended this meeting to discuss on various objectives including to introduce the RCC and LS2 Dam community representatives to the MEE, to give the recommendations made by the RCC and communities, to give space to the communities to share their concerns and requests, and to seek for further effective mechanisms to solve the LS2 Dam issues.

Dr. Tek Vannara, NGOF’s Executive Director shared, “This is the first meeting ever between RCC, communities and the MME to discuss for the solutions to the LS2 Dam problem. After the discussion, I notice that it is good to have a mechanism that can build the trust in each party in order to resolve the issue of the measurement. With this proposed mechanism, we hope the best solutions will happen soon.” Another fruitful result mentioned by Dr. Tek Vannara was that MME agreed to join RCC and the community for a field visit and public forum on LS2 Dam in Steung Treng Province, which is going to happen on July 20 to 22, 2015.

Regarding this development project, three communes and six villages with 854 families are affect from the construction of LS2 Dam. Among those families, some have accepted the compensation and made the move, while some are still claiming for the proper compensate from the company such as:

For villagers who accept the compensated houses, we follow the random selection rule. For instance, villagers from Chrob and Srae Sronok had a meeting to randomly choose their house number. We have two kinds of compensated house: concrete and wooden house. Most of the villagers have chosen concrete house.

“It is still not clear regarding the 254 families that refuse to resettle, therefore, I think we need to discuss more often about that. I accept Vannara’s suggest to have collaboration and we have work base on our national interest not to follow others’ mindset (foreigner). The 254 families we have to negotiate do not let them be flooded there, we have to continue explaining them to let them better understand,” said H.E Ith Prang. He added that MME needs to collaborate with CSOs and NGOs to work together on this issue.

The Lower Sesan 2 Dam project in the Mekong basin has been controversial for a number of reasons – impact on fisheries, fragmentation of the globally unique freshwater ecosystems, poor social impact mitigation, and transboundary impacts.

One of Lower Sesan 2’s project developers, Hydrolancang, has been developing and building hydropower projects in the Upper Mekong River (called Lancang River in China) for years. International Rivers has compared projects involving Hydrolancang on their environmental and social mitigation measures to understand the company’s track record. The three projects we examined were Manwan Dam (Completed 2007, Lancang River – China), Nuozhadu Dam (2014, Lancang River – China), and Lower Sesan 2 (Under Construction, Cambodia). Through fieldwork and literature reviews, we found that in the areas of environmental impact mitigation, resettlement compensation and livelihood restoration measures, and responsiveness to civil society and NGO concerns, the standard being used in Lower Sesan 2 was lower than the Chinese dam projects examined.