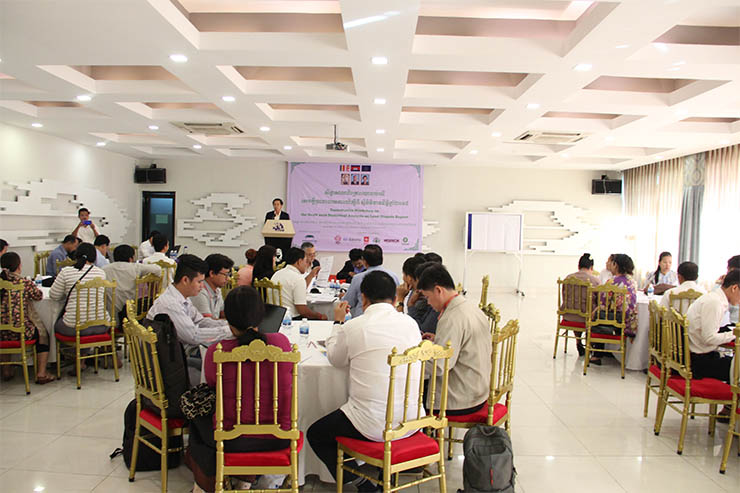 Welcomed remarks by Dr. Tek Vannara, Executive Director of NGO Forum and inform about the purpose of the validation workshop. He provided a brief fact-finding in the statistical analysis on land dispute report 2018 and he added about the plan of the way forward for the launching of statistical analysis on land dispute report 2018 going to be launched in March 2019. He thanks all NGOs networks at the local level who joined hand for keep tracking on land dispute issue for producing the important statistic of land dispute report as an evident base for NGOs who working on the land sector and pushing to the RGC to take action for solve the remaining cases. He also thanks provincial authorities who always give space for NGOs/NGOF to verified land dispute cases for producing this report and so happy to see the representative from 13 provinces and from Ministry of Land Management Urban planning and construction to join this validation workshop. He asked for all the participants in this workshop for putting the input on the draft of this report.

Mr. Vuthy Vananra, a representative from the Ministry of Land Management Urban Planning and Construction mentioned that MLUPC going to accepted all the report which has clear identification or information. He also suggested and commanded on the report such as all information on the number of land dispute a such number of cases and number of household affected, soon, need to be clear, change some wording to align with new S.Ch.Nor announced about provincial and district administration. He also asked for re-consider on direct and indirect affected people of land dispute cases, and cases going to be counted as a land dispute, does it forest issue or land issue? The last he suggested to take off all land dispute cases have been solved, cases in the progressing of solving, and cases which not able to access for information with the provincial governor and for the next workshop please be professional about the participation should be the same level between civil society, communities, and governor. And the statistical analysis on land dispute report should be a delay and need one to two time for a consult with the ministry.

Dr. Toul Dina, deputy of LASSP program from MLUPC, he appreciated what NOGF and its network tried to work for producing the important report. He has mentioned about the special team for land dispute solving and theses teams have solved successfully on many land dispute cases. Does he consider time spending for land cases verification with over than 300 cases? Does he question for sources of information? He asked for change some wording, page numbering. He has mentioned that this report should be consulted with a ministry environment, the ministry of agriculture forestry and fishery because some land dispute is linked to their responsibility.

Mr. Norng Raksmey, the representative of the department of land management from Oddar Meanchey province, suggested for more participation for the next consultation workshop. He noticed that some information posted by media, it has both pro and con if receiver accepted and not do any clarification with stakeholder it can be the feck news, all land disputes information should be talking directly to the local authority for both hot case and general cases. He raised concern about land dispute cases linked to community forest and military, it is about the country’s security. Other cases about land grabbing on forest state land should not be included or count as land dispute case. Last, he asked for more consultation workshop on this report at less two times.

The deputy of the department of land management, from Kampong Cham province, said that land dispute case caused by Maen Saroun company on 400 ha of land areas with 643HHs, people occupies this land illegally but Royal Government of Cambodia issued the land title for people. Kampong Cham ‘s authority was happy to share all information about land dispute cases in the province.

Mr. Van Nary, representative of Kampong Speu province. Cases number 2885 unclear information it maybe not happened in this province. Another case linked to road number 44 have been solved, the case should take out from the report. A case linked to Star Mart company this case some affected people double counted so please make sure the data illustrated in this report is the actual one. Last, he suggested changing some wording.

Mr. Chan Ra, deputy governor of Prey Veng province, suggested to categories land dispute as for a land dispute on state land and private land, NGOF should come to meet with local authority again and prepare one more workshop for last validation.

Mr. Chhun Chanvanthun, the representative of Kep province, asked for more detail information on each case in the province. He appreciated with NGOF and its networks who work on land dispute issue by co-operating with authority. A representative from Kampot province, mentioned one land dispute that occurred in Chomkiri district affected to 95 House Holds were solved, one case in Chhouk district caused by ELC affected to 103HHs provincial authority have been solved by providing land for them and other 189HHs provincial governor requesting approval from Royal Government of Cambodia.

Mr.Ouk Sophal, the representative of Stung Treng province, recommended that the workshop should invite district authority because they are able to respond to what report finding.

Mr. Chheam Tich Long, the representative of Pursat province, suggested to categorize the type of land dispute and the detail information of each land dispute cases should be clear in a table distributed to all province.

Mr. Kaen Puthy, the representative of Siem Reap province, suggested for re-check spelling, report outline, old historical of each case should cut off from the detail information, keep the new updated one. The lesson learns from land dispute solving, Siem Reap province governor always reconciliation between dispute party. There were some cases have been solved such as cases along Siem Reap stream, land dispute case linked to social land concession have been solved 99 percentage. He asked for a contribution from NGOF and its network should bring all fact-finding in this report to talk with the provincial governor for taking action to solve the issue, and more cooperate both direct and indirect to provincial governor they are happy to work with.

Lastly, Mr. Chea Sophart, representative of affected people in Khan Chroy Changva, OCIC case, said that all affected people are eager the resolution for their case, they tried to put their complain letter to many institutions such as parliamentary and ministry of Land Management Urban Planning and Construction (MLUPC) but not yet solved.

Mr. Ouk Vannara, Deputy Executive of NGO Forum on Cambodia, wrap up the results of the discussion and thanks to all participant who representative of each province, provincial departments, representative of MLUPC and communities. He also added that all the comments on the first drafted of the statistical analysis on land dispute report going to be review and make a change as much as a possible base on the methodology of research and objective.

The Meeting was finished at 12.30 PM with fruitful results and clear follow-up action.