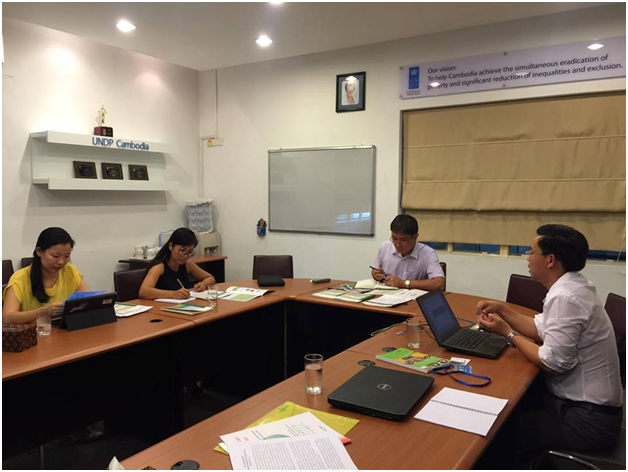 Phnom Penh, February 3, 2016: The NGO Forum on Cambodia (NGOF) attended the meeting with UNDP representatives at the UNDP office in order to strengthen working collaboration and seek for working support to climate change (CC) and environmental issues in Cambodia.

During the meeting, various activities on Cambodian’s CC were raised including the pre and COP 21 plans as well as the further action plans to be taken in the coming period.

Dr. Tek Vannara, NGOF’s Executive Director, confirmed that Cambodia is presently in a highly vulnerable to CC, due to both high levels of poverty and the frequency of disasters. Also and was named as one of the most at-risk countries in the world – in 2014. He also added that the CSOs, who contributed and worked on the Sustainable Development Goals, need to take serious actions on CC problem. Together we are optimistic that Cambodian case will be put for the discussion at the internal stage to get attention and build acceptable resolution to solve our nature hazard and disasters.

“Cambodia is one of the most disaster-prone countries in the world; the primary hazard is variable rainfall, which is expected to be exacerbated by climate change,” he said “we can see that during the last several years, this beautiful country faced with many phenomenal disasters such as drought, flooding and typhoon. Currently, we are even facing the water shortage problem. This problem has happened by both the internal and external factors counting the impacts from neighbor industry countries, the deforestation and the improper development projects in Cambodia.”

The discussion on the Sustainable Development Goals (SDGs) was raised also in the agenda, since CC is the goal #13. The implementation of the commitment undertaken by developed-country parties to the United Nations Framework Convention on Climate Change to a goal of mobilizing jointly $100 billion annually by 2020 from all sources to address the needs of developing countries in the context of meaningful mitigation actions and transparency on implementation and fully operationalize the Green Climate Fund through its capitalization as soon as possible.[1]

After the smooth sharing about the previous and currently activities with the action plans in relevant to the SDGs, NGOF and UNDP have agreed to work together, starting from 2016, on CC Issue, SDGs localization and REDD+ project in Cambodia. The detail activities will be soon developed and circulated among the working group.