Phnom Penh, July 1, 2014: The representatives of ethnic people from four communities – Kbal Romeas, Sre Kor, Sre Pork and Sre Sronuk, Steung Treng province – together with the Civil Society Organizations (CSOs) including The NGO Forum on Cambodia, 3SPN and CEPA were assembled to organize the press conference on “Communities and CSOs Concerns on Lower Sesan 2 Dam” in the morning of July 1 at the NGO Forum Office.

The significant objective of the event was to share about their worries to the public, especially to the government and call for solution to numbers of problems which are expected to happen within a short period of time. During the press, the villagers have mentioned number of negative impacts that will occur and can be utterly affected their livelihood. “If the dam construction is started, we are not only losing our land, but traditional culture we have been practicing and maintaining since the ancient time,” said Srey Libe, 56, a community representative from Sre Pok community. “Counting since our ancestors, our groups have been living here over hundreds of years and our daily lives are totally depending on the forest and this beautiful river for income and nutrition every year. However, due to this LS2 dam project that approved by the government in 2009, we will need to be displaced to the new location. This situation could lead to the ruined and destruction of our ethnic identity and traditional,” he added. Around 5,000 ethnic minority including Prov, Punong and La- from the affected communities will need to be repositioned because of the dam construction. On the other hand, up to date, the proper compensation information from the development company nor does the government has yet shared to the villagers, asides of the twelve relocated families from Pluk Villa. 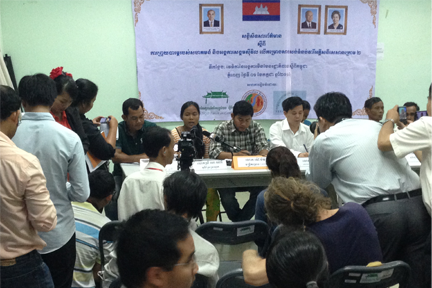 “We do not act against any dam development, yet we also do not support the development projects that could be critically affected numbers of Cambodian lives. In term of CSOs, we are appreciated to see the improvement progress in the country, still we do hope all the development projects are led with code of morality, understanding and be able to deal with the people livelihood by assuring their situations wouldn’t be turning down because of the development,” Mr. Tek Vannara, Executivie Director of the NGO forum on Cambodia stated during the event.

LS2 dam is the first large dam development in Cambodia on the Sesan River which is located in Stung Treng Province. Its capacity is 400 MW under the investment of the share-holders between Royal Group Company and Chinese Company name Hydrolancang International Energy Co.Ltd and Huaneng Group. It is currently under dam construction mostly on reservior clearance and resettlment after the Final EIA report was approved in 2009. The dam is targeted to be completed in 2017.