Kompong Thom, December 2, 2014: One hundred and twenty five participants (45 females) from relevant institutions came together for the second round of Regional Workshop on National Adaptation Plans (NAPs), under the theme “Initial ideas of civil society and community on NAPs components.” The event, organized by The NGO Forum (NGOF) brought together representatives from CSOs/NGO network members, affected communities, farmers, development partners, the private sector and government representatives from Ministry of Environment, Ministry of Agriculture and local authorities to discuss this issue.

The event was conducted in order to:

“Since 2013, floods have caused 253 million dollars destruction  and lead to h 168 deaths. Forty three per cent of the total communes are vulnerable areas, however, if we look at the villagers capacity on disaster preparation and resilience, we can clearly see that it is at a low level, especially the ability to integrate the climate change into the National Development Plan, commune development plans and the commune investment plans, These plans haven’t yet incorporated how Climate Change will become part of the development planning process ,” said Mr. Heng Pheakdey, NGOF’s Deputy Executive Director. “Hence, I hope this regional workshop will be a golden opportunity with enough space for the participants to share, learn from each other and be able to create the effective strategies from their perspectives to ensure the tactics are moving smoothly with good cooperation among the significant partners.”

“I’m very delighted and warmly welcoming to the organizing NGOs, including NGO Forum, for making this workshop happen in our province in order to strengthen the public capacity and knowledge about the climate change adaptation,” H.E. Sok Loo, Kompong Thom Deputy Governor said during his opening remark. “Meanwhile, in order to make our work more effective and efficient, I urge all the participants to pay attention, as I believe climate change adaptation and disaster response plan could proceed effectively based on the three main factors, capacity, resources and involvement.”

This workshop was successfully supported by GERMANWATCH, DCA/CA and SOUTHERN VOICE. 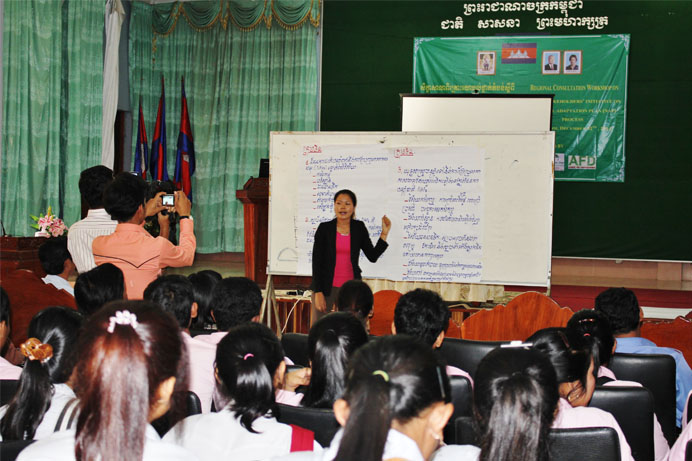