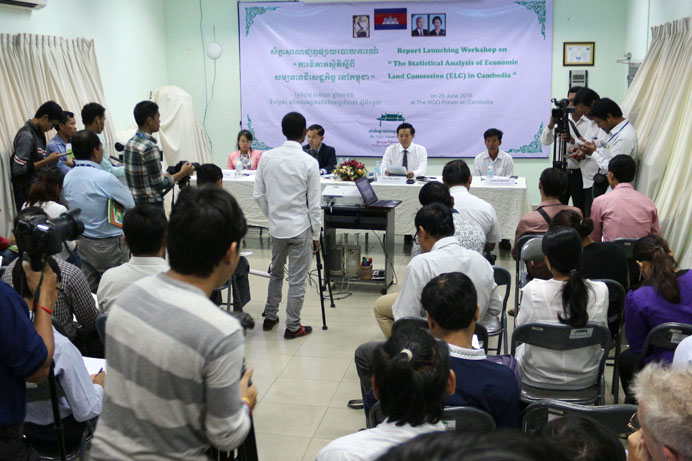 Phnom Penh, June 28, 2016, The NGO Forum on Cambodia organized report launching Workshop on Statistical Analysis of Economic Land Concession in Cambodia, 2015. During the workshop there were 54 participants which including 12 women. The report launching workshop aims to disseminate the results of key finding of the research, the limitation of research methodology of the statistical analysis to all stakeholder, especially to the government officer, as well as to disseminate official research report is for public use. Furthermore, the workshop aims included in the following:

•    Better understanding how the ELCs practices at the ground and processing of those ELCs granted.
•    Assess the impact of granting economic land concessions on indigenous people communities, community forestry and community protected areas.
•    To disseminate to stakeholders about the key findings of report, so that they can develop more effective strategies for advocacy to policy dialogue.

While the report launching workshop stated, Dr. Tek Vannara, Executive Director of the NGO Forum welcome and thank to all panels, speakers and participants both national and international . In his speech he raised four main points such as A) the means of ELC granting which stated in the Article 2 of sub-degree on economics land concession issued by the government in 2005, it defines the objective of the ELCs granting to be used for agricultural and industrial agricultural exploitation, serving economic purposes. The industrial agricultural exploitation included cultivation of food crops or industrial crops, including tree planting to be tree plantation, raising of animals and aquaculture, construction included plant or factory and facilities for the processing of domestic agriculture, produce raw materials, and combination of some or all of the above activities”.  B) The maximum size and duration of ELC grating stated in land law 2001, it defines that the maximum size of ELC granting is 10,000 ha and maximum duration is 99.  C) Briefly quoted about the land condition for ELC granting stated in article 4  of sub-degree on economics land concession, it has five criteria such as the land has been registered and classified as state private land,  a land-use plan for the land has been adopted by the Provincial-Municipal State Land Management Committee and the Land Use is consistent with the plan. A land has been environmental and social impact assessments with respect to the land use and development plan for ELC projects, a land that has solutions for Resettlement Issues, a land for which there have been public consultations, with regard to ELC projects or proposals, with territorial authorities and residents of the locality.   C) He raised that started year of ELCs granting is in 1995 later on in the year of 2012 government issued directive 01 to improve the effective of ELC managing and for suspend on ELC granting and other mechanisms. D) The moving right of ELC control from MoE to MAFF , at least there are 73 ELCs mover from MoE to MAFF and The RGC canceled licenses of 23 ELCs, reducing the duration from 99 years to 50- 70years. E) He talk briefly about the Key finding of the research such as from started year ELC granting to 2015 there are 267 ELCs are proceeding in 18 provinces of Cambodia. It covering 1,532,782.65 ha of land area, meanwhile there are four institutions who granted ELCs include CDC provided 2 ELCs, MAFF provided 141 ELCs, MoE provided 66 and provincial committee provided 18 and other 40 ELCs cannot provide the information of authorization body and  there are 158 out of 267 these causing land disputes. Communities affected by these disputes have sent complaint letters to many authorities and institutions to seek resolution, as shown in Table 6, below. Of these land dispute cases, 42, or 26.58 percent, have been completely resolved, while 50 cases, or 31.84 percent, are partly resolved, and 54 cases, or 43.39 percent, have not been resolved.  F) He also suggested four points to government such as continue to monitor and evaluate the ELC remaining and monitoring all 162 ELCs which have been evaluated in the year of 2015 on their implementing what the demand were required in the evaluate report, to be ransparency in the processing of mapping state land to reduce conflict between the investment project and local communities, all development projects must conduct environmental and social impact assessment with transparent and participated by local communities, push out the resolution of land disputes caused by company ELCs and priority the needed land of local people.

After Dr. Tek Vannara, Executive Director of the NGO Forum finished, Mrs. Net Channa is a GIS/Database Officer at NGOF provided the presentation about the Statistical Analysis of Economic Land Concession in Cambodia 2015 to participants. Furthermore, Mr. Thai Bunleang, villager from Sre Tmay village, Kampong Cham commune, Sombo district, Kratie province, raised a case of land caused by “Think Biotech Company” holds ELCs covering more than 30,000 ha in Stung Treng and Kratie provinces who grabbing the local community land by installing 133 boundary pole at local people farmland and along the river. He suggested to the Government should intervene for solution.

Moreover, there are many question and answer raised by Medias to report writer and villager from effected community and MoE officer who invited as honor guest (Mr.Sy Ramony, Deputy Director of the General Administration of Nature Conservation and Protection of the MoE).

Last, Mr.Sy Ramony, recommended for the next cooperation NGOF should send first drafted report to MoE and other ministry who working on ELCs for comment. And the next version of the report should not late as this version and suggested to some Khmer words in the report. Meanwhile, he suggested that if possible, please contact Mr. Min Chin have valid information much better.

At the end of event, Dr. Tek Vannara, declared for official used and the 250 copies report are distribute. 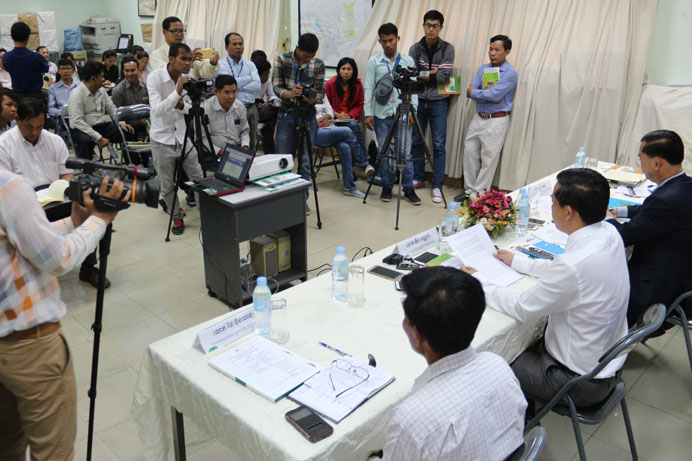