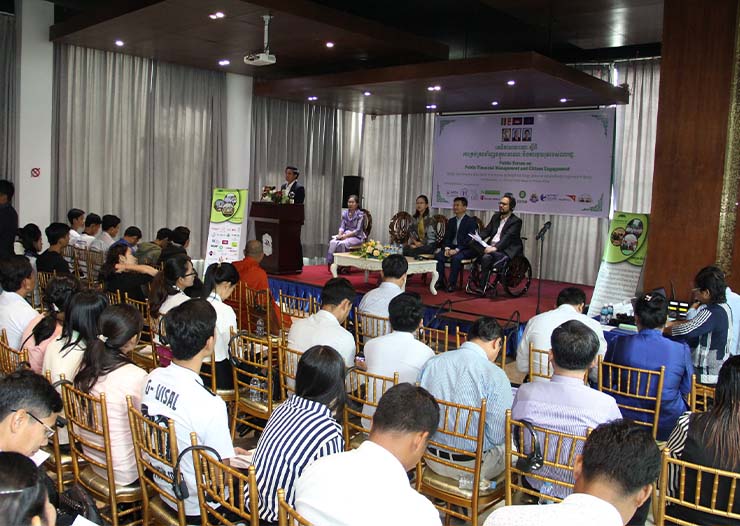 The NGO Forum on Cambodia (NGOF) co-organized with NGOs on BWG which such as ANSA, STAR Kampuchea, Oxfam, GADC, NEP, Save the Children, Transparency International, CRC World Vision Cambodia and YRDP hosted a Public Forum on Public Financial Management (PFM) and Citizen Participation on September 17, 2019 at Tonle Bassac 2 Restaurant. The forum was attended by 217 participants (53 women) from the representative of Ministry of Interior, Ministry of Economy and Finance and development partners, EU, GIZ, ADB, NGOs, journalists and students from universities. The forum has the following objectives: 1) Create a platform for engagement between CSOs to understand the progress, challenges and future direction of the Public Financial Management Reform Program. 2) To understand the Public Financial Management Reform and another reform program (Inter-link of the government. And, 3) Identify how CSOs/Public engage or participate in the reform program.

Opening remark, Dr. Tek Vannara, Executive Director of the NGO Forum on Cambodia said that in early 2019 under the framework of the Implementation of Budget Reform Strategy 2018-2025, the Royal Government of Cambodia has approved three strategies aimed at ensuring the sustainability of State revenue and enhanced financial management efficiency. Such as the revenue mobilization strategy 2019-2023, focus on the modernization of revenue collection technology, improve service delivery and sustain growth. The second strategy is to reform the national public financial system of 2019-2025 with emphasis on improving the efficiency, transparency and accountability of public resources. In addition to the Public Financial System Reform Program, the Royal Government of Cambodia under the support of the National Committee for Sub-National Democracy has signed a Memorandum of Agreement with partners and NGOs such as Oxfam, Star Kampuchea and World Vision Cambodia. To implement the Social Accountability Framework (ISAF) Phase 1 began in the years 2016-2018, and Phase 2 is starting in 2019-2023. It is part of the governance and process of constructive engagement to improve public services, including health, education and public services at the sub-national level.

Ms. Sok Chanchorvy, Program Manager of Oxfam. Respected to venerable monk and all the stakeholders especially the students. Great thanks to your involvement. I was very proud to be here. The topic taking on the PFM. Some of you especially private sector never heard about the PFM on Cambodia and in the sub-national level. While you have good understanding, it would help to learn about PFM. The national budget is the contribution of all citizens and stakeholders. It is very important for CSO and private sector to involve in PFM. Some time we have discuss about the technical term. To make good understand of the public, eg. we work together to increase the national economy. We have the obligation to pay tax to increase the national budget. We have the obligation to contribute to the national budget. The contribution of us not only in Cambodia but in all the countries in the world which faced by the war. For example, the speaker will share information to all participants. The government increase access to information related to budget to make it easy for public. The opportunity to provide to the women and most vulnerable to understand and develop themselves and the national economy. The good governance is very important to help public understanding about the reform. Express thanks to the participation and the government who commit in the reform since 1995 till now. We would like to express thank to the reforms but should be involve by all the citizen to make the national economic growth. It is the result of our countries. Thanks to EU, ADB and GIZ to support the government to the reform. Thanks to BWG to overcome the obstacle for citizen involvement. I hope that you would get the expectation. Please involve in the discussion with fruitful result of PFM.

Presentation EU Contribution on PFM in Cambodia, Mr. Javier CASTILLO ALVAREZ Official in charge of grants and support on managing public finances of the EU Delegation to Cambodia. The reform achievement by the royal government of Cambodia. Strengthened links between policy and budgeting. Since 2018 the reform has significant results. Line ministries committed to the reform. Until 2015 we feel that MEF committed to work very well. call partnership for transparency and accountability. Very few countries has the same reform and involve CSO to involve. We provided technical assistant to MEF. The funds transferred to the government. Benefits of budget support with very good planning and implementation. We focus on the sustain ability and intervention. Eligibility criterial for monitoring the reform.

Closing Remark, Ms. Chet Charkyar, Executive Director of Star Kampuchea. Total 217, (53 females) representative of the stakeholders at the national and sub-national level. We discussed about PFM and involvement of citizen in budget formulation. We want the people to get quality of services. As the citizen, we will get other services. What should we do to get quality services for women and children. We want policy maker to increase the budget for the citizen to get good service such as health center. Does health center need to get enough budget support for giving services. We learn the infomation from MEF, Development Partner, school principle, health center, youth and the road map for ISAF phase II. We need the increase of national budget to disburse to the sub-national level. We will prepare our plan together. Express great thanks for the organising committee and donor who support the event.