Phnom Penh, Cambodia, 17 November 2015 – Cambodiahas placed in the bottom category for transparency of its national budget according to the International Budget Partnership’s Open Budget Survey 2015. The report, the fifth of its kind, is the world’s only independent, comparative survey of budget transparency, citizen participation, and independent oversight institutions in the budgeting process. Combined these components are the main pillars of accountable budget systems.

Assessing 102 countries around the world, the 2015 Survey finds that Cambodia is among the bottom 32 countries on the Open Budget Index, or OBI, which uses internationally recognized criteria to given each country a transparency score on a 100-point scale. Cambodia’s OBI score of 8 means that citizens have little or no access to the budget information they need to understand the budget and hold the government to account.This matters because budgets are the main tool governments use to set policies for raising and spending public funds, which promote development and meet the needs of the country’s people.

“Budget transparency is very important for the Cambodian people who own the country and pay tax to the government. Cambodia’s Government should open more space for the Cambodian people and CSOs to be involved and participate in the whole process of budget development and the draft national budget law at sub national and national level. Budget information should be more available on MEF’s website to ensure the public can easily access that information. Budget transparency is a key contribute to sustainable development in Cambodia and building trust among stakeholders. We hope that in the next assessment, Cambodia will increase its score. This will only happen if the government commits to implementing the recommendations in the OBS report” said Dr. Tek Vannara, Executive Director of NGO Forum on Cambodia, which conducted the research for Cambodia.

Overall, the Open Budget Survey 2015 finds that 98 of 102 countries surveyed lack adequate systems for ensuring that public funds are used efficiently and effectively. The 98 countries fall short on at least one of the pillars of accountability (transparency, public participation, and strength of oversight); 32 of these fall short on all three. The widespread lack of strong budget accountability systems poses a threat to the implementation of critical international agreements, such as the United Nations’ Sustainable Development Goals and the international agreement that is expected at the 2015 Paris Climate Conference.

The study finds that budget transparency is generally improving — a finding consistent with previous reports. The average OBI score has increased to 45. Progress was particularly robust among some countries and regions that were previously not as transparent, including the Kyrgyz Republic (its OBI nearly tripled), Tunisia (its OBI effectively quadrupled), and Francophone West Africa.

Compounding the widespread lack of transparency is a similar lack of opportunities for public participation and oversight. With scores of 60 or less on this part of the survey, 95 of 102 countries fall short of providing opportunities for public participation. Further, the survey finds that legislative research, analytic capacity and quality assurance systems in national audit bodies are lacking. This severely compromises the ability of oversight institutions to be effective guardians of the public purse.

Cambodia scored 8 on the opportunities the government provides for public participation in budget processes. With regard to the strength of Cambodia’s formal oversight institutions, the score for the legislature was 43 and the score for the supreme audit institution was 58. These could be improved if the government provides an opportunity for the public to engage at the national level. For instance, the government could provide for the public to testify at legislature hearings or discuss the budget at Ministry of Economy and Finance level or National Assembly before the full of National Assembly debate on draft budget law.

In contrast, the survey finds that 32 countries are insufficient on all three pillars of accountability. These include a number of countries that have consistently provided scant or no budget information at all: Algeria, Bolivia, Cambodia, China, Equatorial Guinea, Fiji, Iraq, Myanmar, Qatar, and Saudi Arabia.

“The public needs access to budget information and opportunities to participate throughout the budget process. Coupled with oversight by legislatures and audit institutions this contributes to a more accountable use of public money,” said Warren Krafchik, Executive Director of the International Budget Partnership. “A growing body of evidence indicates such budgetary checks and balances yield better outcomes for people, especially those who are poor or vulnerable.”

Substantial progress can be achieved quickly. For instance, the survey finds that most of the least transparent countries actually produce significant budget information for their internal use and major gains could be made at little cost by just posting these documents on the government website.

The means and mechanisms to establish these budget accountability pillars are readily at hand. Ultimately, advancing transparency, participation, and oversight almost always comes down to a question of political will.

“The potential threat that Cambodia’s lack of strong accountability systems poses to our ability to achieve our development goals is of great concern,” said Dr. Tek Vannara, Executive Director of the NGO Forum on Cambodia. “The government should take the following steps toward rapid improvement: 1) Increasing the number and comprehensiveness of budget document that are published; 2) Increase the public engagement in budget process at the national level; 3) Provide the legislature with better access to research and analytic capacity. Improvements will only happen if the government has commitment to do so.”

About the Open Budget Survey 2015

The new report examines the current state of budget transparency and how it has changed over time; the degree to which opportunities for public participation in the budget process are present; and the strength of the two formal oversight institutions, the legislature and the supreme audit institution.The report is based on the International Budget Partnership’s Open Budget Survey, the world’s only independent comparable measure of budget transparency, participation, and oversight. The Survey is implemented by independent budget experts based in each of the 102 countries surveyed and anonymously peer reviewed by another expert on the particular country’s budget. Governments in all survey countries are also invited to review and comment on the results, and many do so.

The 2015 Survey is the fifth round of this global assessment, which was first undertaken in 2006.

Pillars of Budget Accountability
The Survey consists of 140 factual questions that evaluate three pillars of budget accountability. Budget transparency is rated by the answers to 109 survey questions, which produce a score between 0 and 100 on the Open Budget Index (OBI).  The second pillar is evaluated using 16 questions that rate opportunities for public participation. The final 15 questions of the Survey examine the strength of the oversight pillar comprised of the legislature and the supreme audit institution of each country, generating separate scores for each.

For the full report and other resources, including country-specific results, please visit: 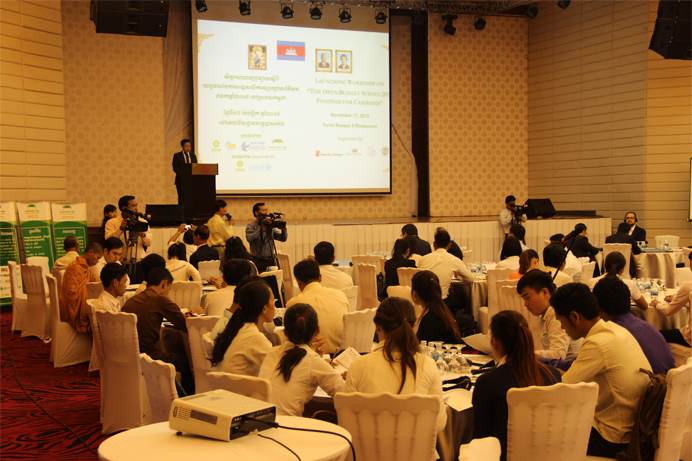