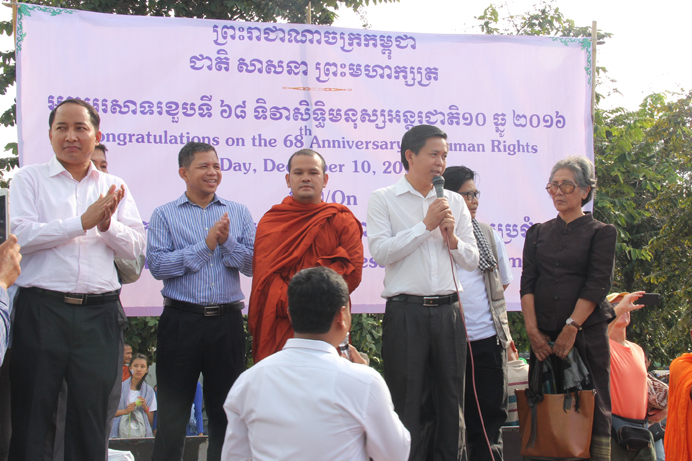 On 10th December 2016, there were around 2,000 people from different institutions, such as NGOs, INGOs, national and international news, community activist, factory workers and other fellow Cambodia citizens gathered together at the Freedom Park to celebrate the 68th anniversary of International Human Rights Day under the theme “Promoting Rights to Freedom of Expression and Assembly”.

The 68th Human Rights anniversary celebration organized to show a united voice of communities and civil society organizations in order to have a strong demand for full freedom of expressions and assembly that has been restricted by the government through some new passed laws in the country such as law on peaceful assembly, law on Association and NGOs (LANGOs) and Law on trade union and restricted by the real practices of state authorities. 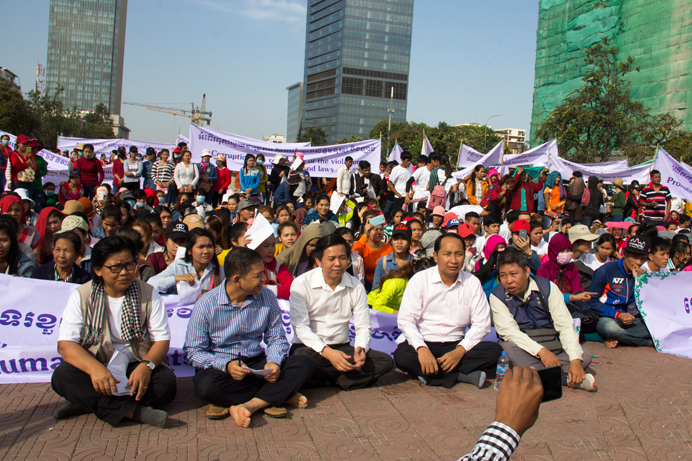 Mr. Young Kim Eng , President of PDP-centre, on behalf of CHRAC and organizing committee stated in his open remark highlighting the obstacles the NGOs and civil society communities is experiencing in regarding to the freedom of expression in 2 016. The arrest of human rights and environmental activist and the assassination of government critic, Dr. Kem Ley, were spot in his remark along with the current political development, especially the agreement of new main political parties lately that may lead to creating a positive impact to thee human rights work. Mr. Kim Eng, in his last remark, encouraging people to keep debating and having a peaceful march every years, since it is not just only individual, yet it’s for everyone.

Mr. Tek Vannara, the Executive Director of NGO Forum, from his speech highlighting the important of freedom of expression and assembly, and how it affects to the prosperity, sustainable development, environment and natural resources. His emphasis was to have all stakeholders cooperative too ensure that freedom of expression and assembly could be possibly made.
Head of Cambodia Labour Confederation (CCLC), Mr. Art Thun, marked the importance of 10th December as it shows about the significance, problems, and process of human rights development in Cambodia. Mr. Ath Thun emphasized the importance working together between authority and the organizer to ensure a smoothly peaceful march. Moreover, he indicated the important of the focus on the minimum wages of the garment worker, and the further increase of the wage needs to take into consideration.
After a long day and tireless preparation, the event has concluded in a v very peaceful manner at the same day. Participants have shown their supports and very participatory. The anticipation of being dispersed by the authority was unrealistic.
The event has brought different messages from different human rights actors for the government to get attention. Joint statement that signed supports from dozen of NGOs locally and internationally has mentioned concerns and requested the government to take serious actions to avoid any further human rights violation in the country. The statement also called for the government to push for more actions to find who behind the assassination of human rights prominent, Dr. Kem Ley, who months ago was shot and killed in the heart of the city under the security camera in a gasoline mart and for the release of human rights activists from ADHOC who accused and detained by the government for their human rights activism. 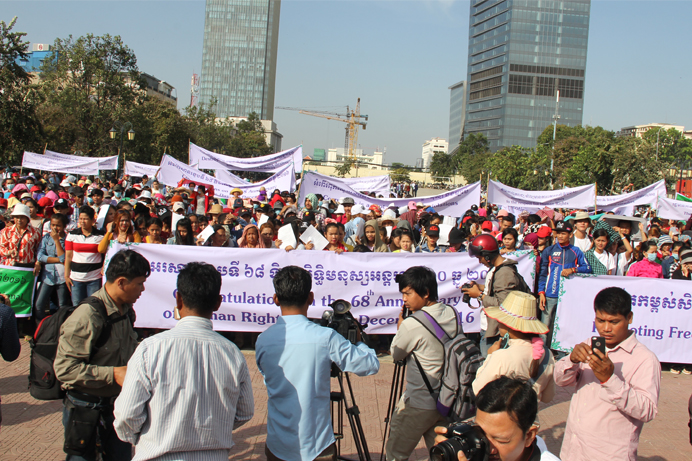