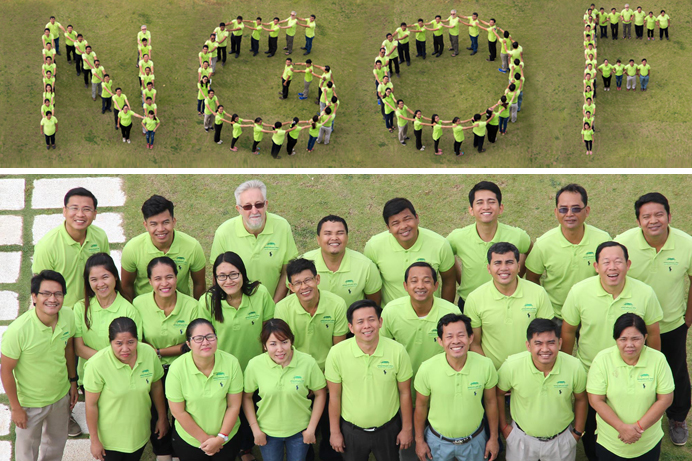 The Staffs of the NGO Forum on Cambodia (NGOF) organized Annual Program Reflection from 26 until 29 December 2016 at Belleview Building. This refection aims to strengthen capacity of staff related to program and operation implementation; to strengthen team building, communication and accountability within and across teams; as well as to finalize NGOF 2017 action plan and risk mitigation strategies.

Opening remark, Mr. TEK Vannara was greatly appreciated our accomplishments throughout considerable effort whole year 2016. He added that NGO Forum had actively contributed to help the poor and vulnerable in our society through influencing policies and spacing ourselves to dialogue with government agencies, private sectors and national assembly.
Despite the fact that NGO Forum has less numbers of staff than previous year, we had achieved more results significantly. Moreover, he had emphasized some main embassies such as U.S and U.K embassy and development partners have enormously admired NGOF’s work this year. Regarding funding support this year, he mentioned that NGOF has sufficient funding sources to operate our annual operational plan, especially during the last semester due to some main activities that have been delayed from second and third semester.
An alternative significant achievement is that NGO Forum has been awarded by government agencies (among 15 led NGOs and DPs in Cambodia) for its contributions to Cambodian development. However, the most important thing is that NGOF has wanted to see the transparent and accountable government to people in all development aspects. In addition, it has been highlighted that the government has widely opened spaces to dialogue among civil society organizations (CSOs) in Cambodia and government themselves. Even though NGO Forum has dramatically produced outputs in the year 2016, there still have been faced some key challenges as following:
– Disagreements on political environment
– Arrested environmental activists
– Arrested Human Right Defenders
– More requirement of donors’ reports and audits 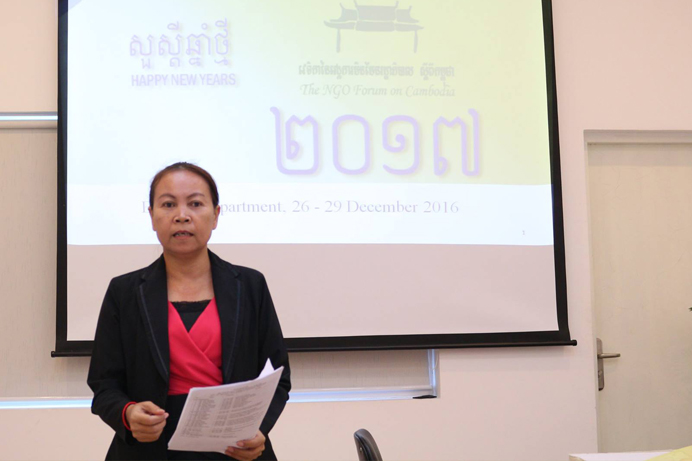 Ms. Prum Bopha, member of management committee had an honor to participate the Annual Program Reflection today. Personally, she would doubly welcome NGO Forum’s colleagues and advisors to be here. These four days meeting, she hoped that NGOF staff would significantly produce many outputs such as annual action plan 2017 to implement it effectively. Furthermore, NGO Forum’s colleague would actively participate to engage and follow the organizational policy and strategies such as effective advocacy approaches, coordination and monitoring and evaluation. In addition, she strongly believed that this meeting would be a considerable opportunity for staff to get motivated and build up a strong teamwork to help Cambodia society. Once again, on behalf of management committee, she has acknowledged to those extraordinary achievements that NGO Forum’s colleagues have come up so far. She wished all staff successfully discuss to respond to the donors’ recommendations and she declared the opening annual reflection workshop officially. 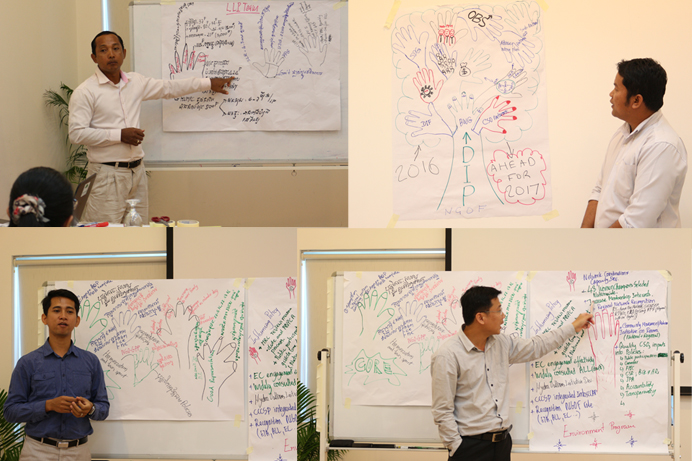 Each program has highlighted significant accomplishments and considerable observed impact of the NGO Forum’s work during the year 2016. The programs have illustrated with palm diagram and results. 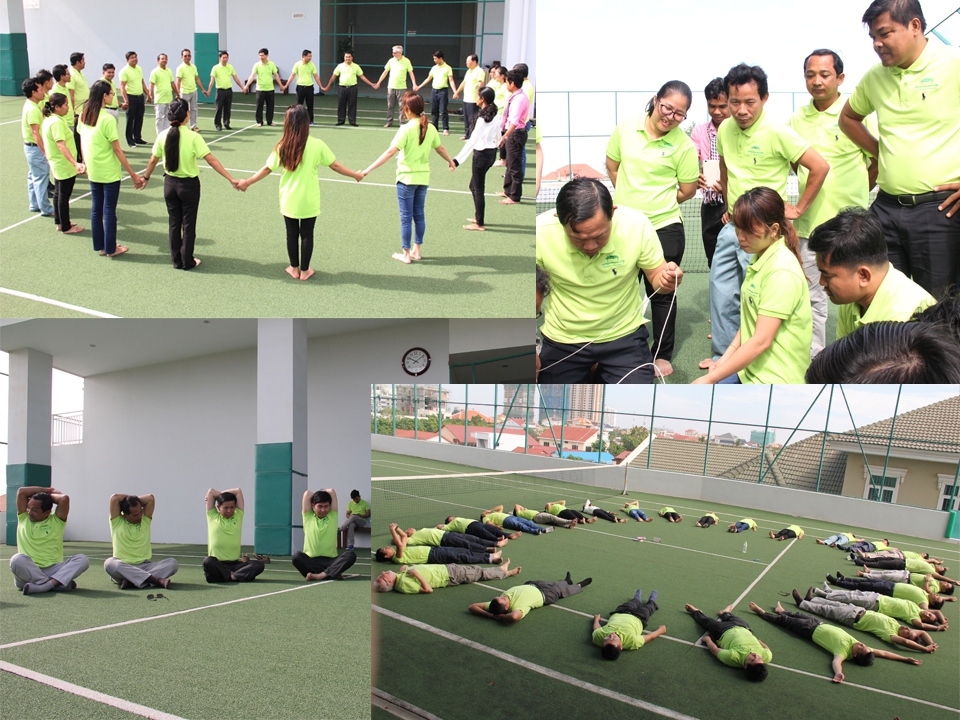 Take this time, NGO Forum’s staff organized building the team Spirit and Coping with Stress. The behavior reflection aims to reflect about how a person to be a good role model in the organization. In addition, it contributes to build up a good leader potentially. There were 6 Personal and Professional Boundaries are Physical, Property, Intellectual property, Time, Spaces and Emotion. 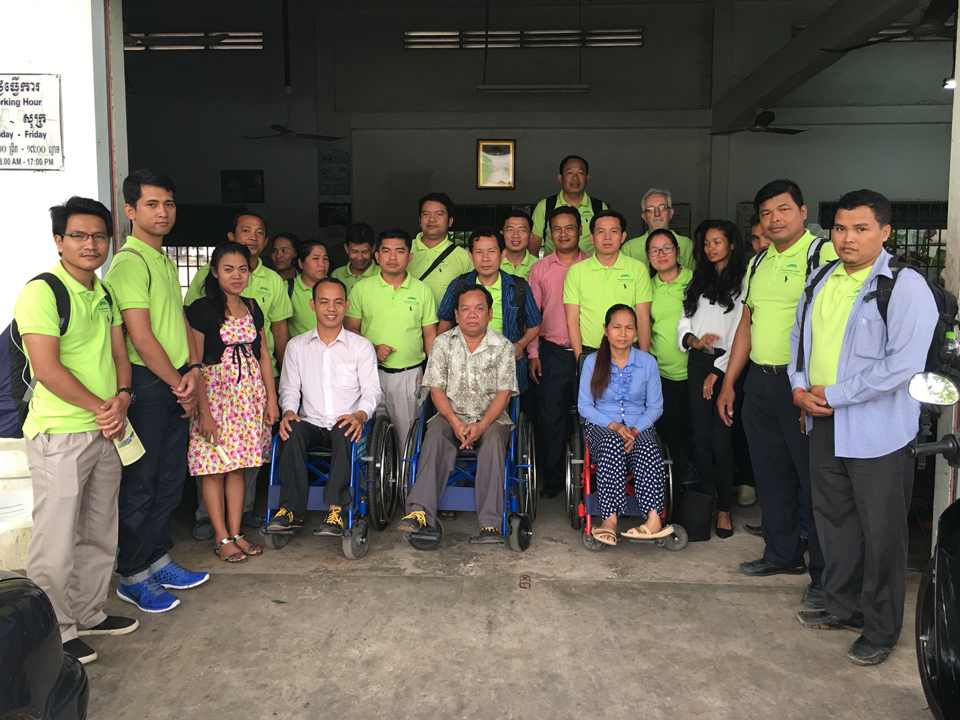 After closing the annual program reflection in 2016, on 29 December 2016, in afternoon, the staff of NGO Forum visited Association for Aid and Relief, Wheel Chair for Development (AAR, WCD). The aim of this visit was to exchange information between NGO Forum and Association on the mainstreaming disability in the process of development and policies. Another, NGOF wanted to see the value chain of wheel chair production. 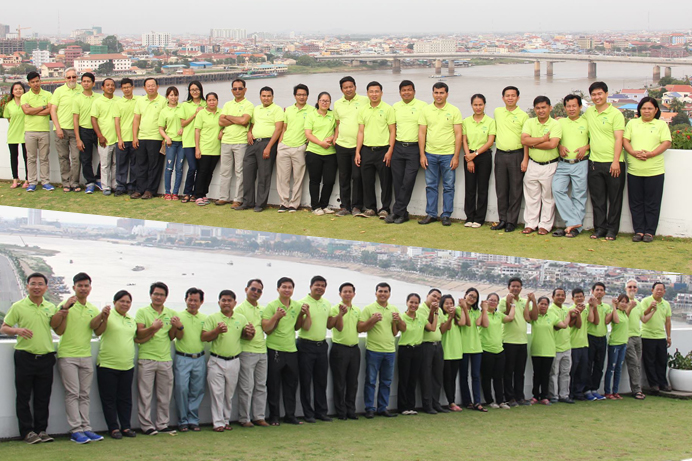