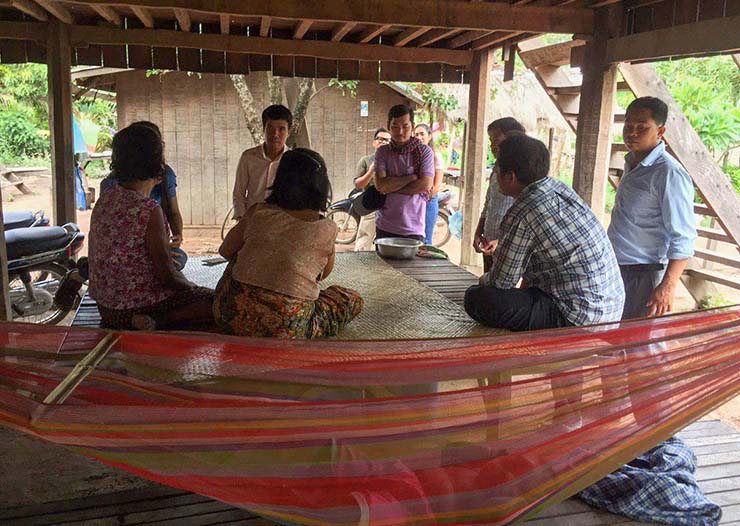 The impact of the project on maintaining hydropower dams in the district is one of three cases we chose for intervention. Following a meeting with the Preah Vihear authorities to verify the information and data in the Draft Investigation and Resolution Report on May 16, 2019, the network members agreed to monitor the progress of land and property survey implications for compensation.

Preparedness meeting of Network Member Organization
On the evening of 23 July 2019, the NGO Forum on Cambodia facilitated a meeting of members of the Preah Vihear Land and Housing Network to enhance cooperation, share updates, address project impacts and monitor progress and interventions for addressing the issue. As a result, there were 13 participants (2 female) from NGOF, NPA, DCA, ADHOC, PKH, OPKC, NTFP and CCHSR. Mr. Ouk Vannara, Executive Director of the NGO Forum on Cambodia, thanked the active involvement of members of the Preah Vihear Network, together with land and natural resources issues.

Mr. Lor Chan, ADHOC coordinator for Preah Vihear province, shared information on the history of the project of maintaining the dam. In this case, the Ministry of Water Resources and Meteorology owns the project, which signed a memorandum of understanding with two Chinese companies (Guangdong Foreign Construction Co. Ltd. and Guandong Yuandian Engineering) in August 2016. The project funding is financed by the Chinese government through EXIM Bank of China. The project has affected the farmland and residential land in three districts and one municipality (Rovieng Chey Sen, Tbeng Meanchey and Preah Vihear districts). There is no clear data on the impact of these families. It is conducting a land survey by the Provincial Working Group on 70%. Authorities have set up border posts or flooded markers. At the same time, brokers are forcing people to sell their land at low prices.

Results of the information collection at the project implementation
On July 24, 2019, representatives of membership organizations and partner organizations, including NGOF, NPA, DCA, ADHOC, PKH, OPKC, NTFP and CCHSR, updated the project implementation information by interviewing residents and villagers in Kravanh village. Phear commune, Chey Sen and Phsar village, Srae village, Pram village, Bram commune, Tbeng Meanchey district, Preah Vihear province and inspecting dam site and reservoir. As a result, we observed:
• Public consultation for citizens and other stakeholders is low due to the lack of publication of project information and master plan in the project area. Through interviews, people affected by the project revealed that they did not have a clear understanding of the project, participation, study, evaluation, compensation, impact, grievance mechanisms, and development benefits. “Two years ago, there was a public announcement that hydropower dams would affect people’s land. The last step was to say that a reservoir was being distributed to the people.”
• Land acquisition movement affected by project: Along with the inter-ministerial multinational team studying flood demarcation and demarcation of land, villagers have been intimidating people with land in the catchment area pay between US $ 250 and US $ 100 per hectare as the government has yet to issue a compensation policy. “Since the sixth month, an unnamed lady has purchased 1 hectare of flooded land for $ 1,000 through the village trader. People who are poor have been sold to traders. “
• Dam status: The dam has not been built yet, but there have been a number of excavators and excavation works. People knew where the dam was, but there was no sign or marker.

Challenges
According to the plan, the Working Group, members of the Land and Housing Network, have submitted a letter to the Preah Vihear Provincial Board of Governors requesting a visit to the provincial authority to review the actual land measuring process and to have a formal consultation, but apparently this request has not been approved. Justifying that the governor was busy, he did not have time to meet this request yet. The request for a field visit with the officials did not respond, and the officials did not allow the land and housing rights group to join the activities, despite the permission or request of the former governor of Preah Vihear province.