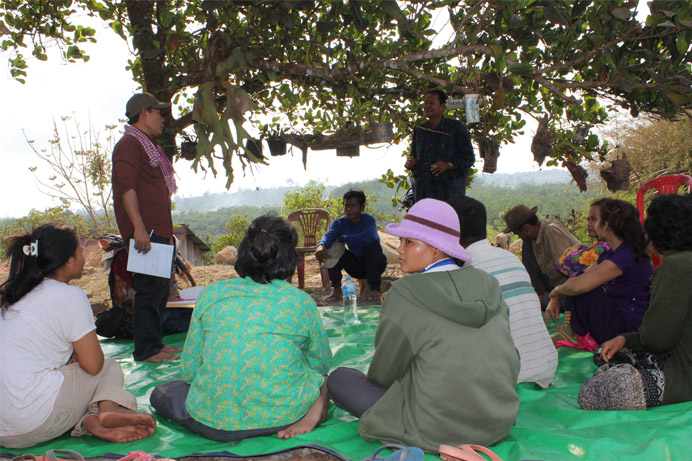 Pursat, March 18 – 20 2015: Representatives from The NGO Forum on Cambodia (NGOF) and another five NGO partners including Adhoc, Community Legal Education Center (CLEC), Cambodian Human Rights Action Committee (CHRAC), Khmer Kampuchea Krom for Human Rights and Development Association (KKKHRDA), and Licadho joined together for the 3-day trip to investigate the land grabbing issue in Thmorda village, Pursat Province. The goals for this trip were to meet with both local authority and the local villagers in order to get an update information on the land dispute from both government and community sides, hearing the possible solutions suggested by the affected communities, empowering the villagers to be actively involved in their land issue to the public, and lastly to get an update and study about the authority action upon the occurring problems.

First, the investigation team managed to arrange meetings with various local authorities in the area such as Deputy Provincial Governors, Veal Veng District Governors, Director Department of Ministry of Environment, Director Department of Ministry of Land Management Urban Planning and Construction and other relevant officials. As a result, the local authorities agreed to prolong the time for the villagers in filling the community’s Information form of until the end of March, the authorities and the NGOs representatives decided to organize a Joint Technical Working Group Meeting, and later on to arrange the Multi-Stakeholder Workshop in the province, in which all concern parties will be invited to attend.

The day after during the meeting with the affected communities, the team shared an update result from the meeting with the local authorities to the families as well as asking for the actual progress of the land situations from them. They also took the opportunity to discuss, provide the legal consultation and advice on land issue to villagers in order to strengthen their advocacy capacity.

In the discussion session, the investigation group observed that the vulnerable people were able to express their confidence and ability in addressing their land grabbing issue. Meanwhile, they found out that out of 23 affected families, six families have not yet filled in the Information Form for the authorities, since away to work in Phnom Penh or in the other countries.