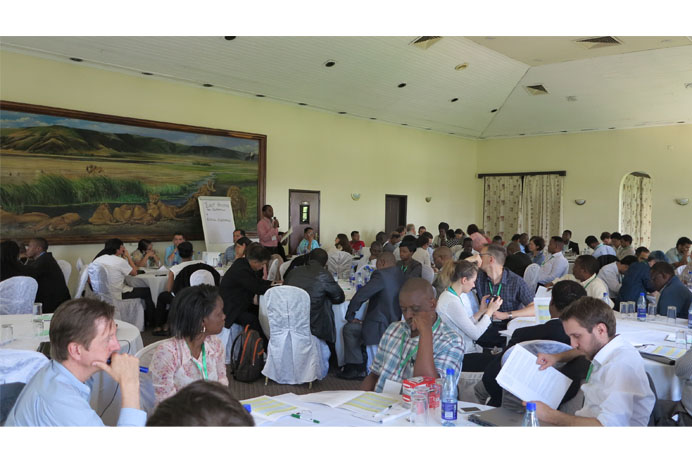 Nairobi, Kenya, April 24 – 30, 2015: As active partner of Southern Voice on Climate Change (SV)-CARE Denmark and Adaptation Fund NGOs Networks (AFN) – GermanWatch, NGO Forum on Cambodia (NGOF) were invited to attend the 9th International Conference on Community-Based Adaptation (CBA9) hosted by the Government of Kenya. The theme of this year’s conference was “Measuring and enhancing effective adaptation”. The event was organized in order to share the latest developments in community-based adaptation (CBA) with an international audiences.

The CBA9 schedule began with a number of field visits, from April 24 to 26 that allowed the participants to understand local adaptation projects in action.

The next schedule was a three-and-a-half-day workshop, held from April 27-30, 2015, included plenary sessions, high-level speaker panels, and parallel sessions with group discussions. Plus, there was a session featuring short film during the workshop to those who enjoyed a hands-on approach to learning. It had featured a “Poster Marketplace” that providing spaces for researchers to present and discuss posters summarizing projects related to the conference theme.

Taking a part in this significant occasion, NGOF and its regional network – AFN and SV – were strongly involved in several strategic workshops, which organized during the time. NGOF’s representative was asked to provide updates on AF project progress, environmental issue and climate change (CC) in Cambodia. Moreover, the future collaboration activities between NGOF, AFN-GermanWatch and SV such as updated Joint Principles for Adaptation (JPA) principles, regional hub workshop and case study on AF were also put for the discussion.

JPA version 1 is a statement developed in 2014 and was based on initial contribution from a number of civil society networks across the world on what they consider to be a benchmark to promote effective and equitable adaptation to climate change.

In practice, JPA is used by SV partners include NGOF to influence the implementation and monitoring the existing policies. It is also being used by various partners at the local level.

JPA are applied in very different national settings, and each network use it in the way that makes most sense in the local political context. In Mozambique, Nepal and Bolivia, for example, the JPA is mainly used in research by analyzing adaptation policy frameworks while in Ghana, Malawi, Sri Lanka Cambodia and Vietnam the JPA are mainly used to guide advocacy priorities.

Additionally, JPA also used by some partners to link local actors to the national level or to guide sectorial policy analysis. These differences reflect how partners are operating in varying policy frameworks – some governments being more or less open to work with civil society – and have different capacities and priorities.

The SV partner networks started the process of updating the Joint Principles for Adaptation, and the version 2.0 has been finalized. The changes have been informed by the experiences of using the JPA as a tool for dialogue and advocacy to promote efficient and equitable national frameworks for adaptation to climate change.

As JPA was developed to also at a local level, an important discussion on how this local engagement can be used to influence the implementation and planning of national policy was included in the conference dialogue.

As a result, some significant outcomes were produced from the discussion such as JPA can serve as a tool for monitoring and evaluation of the local implementation of policies for evidence-based advocacy, and local level decision makers, and main player in national planning – can promote the JPA concepts for further upstream the political system.

In many countries, JPA has been presented as “friendly government ministries”– but there is question that if this is a sufficient tool that can be adopted, how can JAP engage those ministries and decisions-makers such as finance or planning ministries into the plan?

Hence, participants were divided for the group discussion to seek for better solution on how can they leave the civil society “comfort zone” and reach beyond their usual contact points with the government.

All the answered were analyzed and short into 3 different categories:

Promotion at CBA9 and Way Forward
The CBA9 conference allowed for Southern Voices to present the JPA – both at a poster session and a joint session with IIED.

The joint session proved very successful with around 100 participants actively engaging in debate around the JPA and radical (long-term) adaptation.

The workshop allowed SV’s partners from different continents to meet and personally engaged in the debates. Later this year the will be a last round of updating the Joint Principles for Adaptation into a final version to be presented in Paris around COP21.