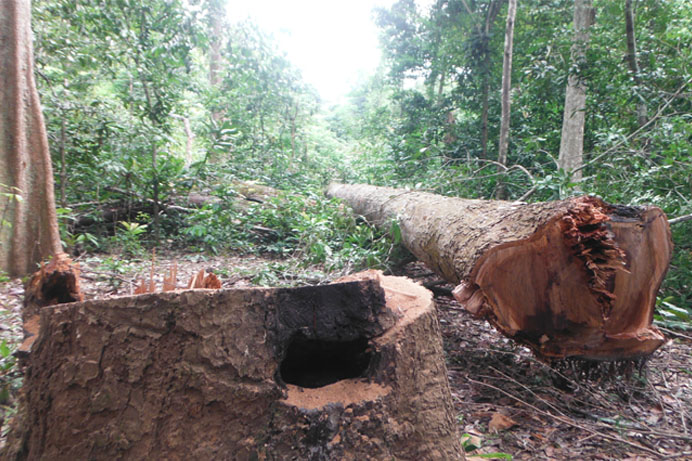 180 families of Bunong indigenous people living in Chork Char village, Sre Chhouk commune, Keo Seimar district, Mondulkiri province have occupied traditional collective land and resin trees since their ancestors. The process of collective land registration is on ending of second stage, the communities’ interior status was completely recognized by the Ministry of Interior.

Base on the investigation result, the ELC process of Benh Hoeurk Kratie Rubber 1 Company Limited is not complied with the domestic and international laws and regulations including the Constitution of the Kingdom of Cambodia (article 58 and 59), the Law on Environmental Protection law on Environmental Protection and Natural Resource Management, Land Law 2001, the Law on Forestry, the Law on Environment, Sub-Decree No. 146 on Economic Land Concession of the Royal Government of Cambodia, and the Sub-Decree on Environmental Impact Assessment, as well as other two international laws (the 1971 Ramsar Convention on Wetlands focusing on related interests between states and citizens to prevent and avoid abuse of environment and to ensure global environmental safety and the Convention on Biological Diversity). For instance, the ELC has not been registered as state private land, and the Company has not Environmental Impact Assessment (EIA) as well as public consultations with local authorities, affected communities and other relevant stakeholders. In December 2012, Benh Hoeurk Kratie Rubber 1 Company Limited used machineries to destroy indigenous communities’ resin trees and bulldozed the1500 ha of IP rotation plantation in the areas of Sre Trao, O’Tayang, Trapaeng Thmar, and Trapaeng Ploes in Chork Char village, Sre Chhouk commune, Keo Seima district ownership by Bunong indigenous communities. At the time, systematic illegal logging and communities’ resin trees had occurred actively in the outside of the ELC areas and driven into ELC area of Benh Hoeurk Kratie Rubber 1 Company Limited.
The affected IP villagers have conducted many advocacy activities to against the company action such as gathering to protest on site against their land clearing, committed by the company, and submitting their complaints to competent authorities at both sub-national and national levels to seek for solutions. However, up to date the IP land conflict has not been resolved. Moreover, three IP community representatives were charged of acts affecting private property by the Mondulkiri provincial court based on the Company’s complaint and they were put under judicial supervision while almost 100% of ELC zone was cleared and planted rubber plantation by the Company.

IP group of forest patrollers and NGOs working involve this case were always threaten by some power man and illegal loggers during their field investigation of forest patrolling due to benefit and not yet understanding each other. However, we have noticed that the local and provincial authorities and the Royal Government of Cambodia have willing to work good cooperation with NGOs and communities to solve land dispute and natural resource protection. For example, those authorities always allow NGO Working Group to meet for information sharing and open dialogue in order to the resolution ways.