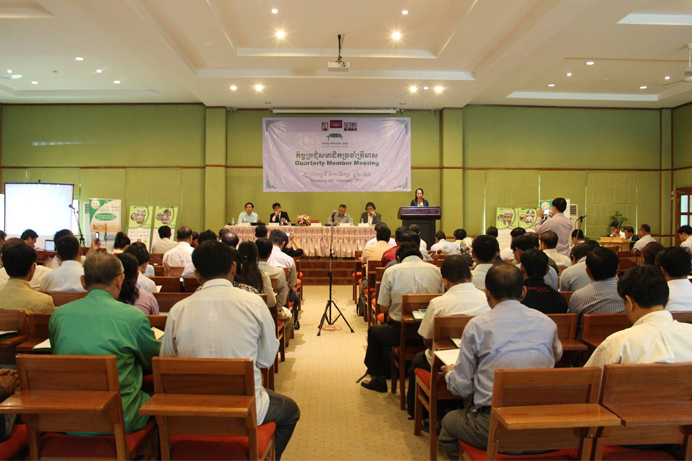 On Thursday 02nd February 2017, the NGO Forum on Cambodia conducted its Quarterly Membership Meeting (QMM) at the Phnom Penh Ecumenical Diakonia Center (PPEDC) in Phnom Penh, Cambodia. This was a half-day meeting among NGO Forum’s members, network members, and relevant stakeholders from 8:00am to 12:00am. There were 138 participants in this meeting.

In the opening remark by Ms. Prum Bopha, Member of the Management Committee of the NGO Forum on Cambodia and Executive Director of RAO. Firstly, she thanked all government officers, NGOF members, network members, INGOs and NGOs who attended today’s membership meeting. Then, she introduced the QMM’s objective – to share and discuss issues in Cambodia in order to find the best solution. 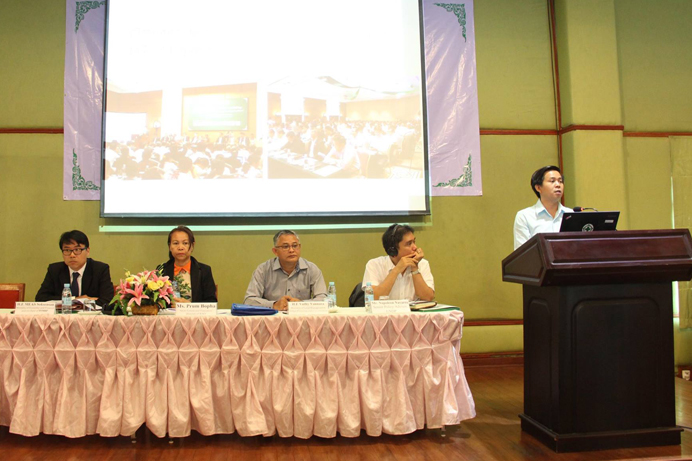 Dr. Tek Vannara, Executive Director of the NGO Forum on Cambodia (NGOF) thanked all participants who were from government agencies, NGOF members, and INGOs/NGOs participated in this half day meeting. He presented an Update on the achievements of the NGOF from November 2016 to Januarly 2017 as follows:
– National Forum on Agro-business was held on 2-3 November 2016 under cooperation with MAFF and donors. As a result, inputs were collected related to the Corporate Social Responsibility (CSR) of private sector on agricultural sector.
– Climate Change Adaptation (CCA) dissemination workshop was held on 8 November 2016. As a result, Cambodia’s position in CoP 22 was addressed and agreed upon with government to work together on CCA action.
– Natural Resources and Environmental Code (EC) consultation workshop was held on 23 November 2016. As a result, about 50% – 75% were incorporated. Currently the draft 7th was released and handed to Minister of MoE.
– National Advocacy Conference on sustainable development was organized under the cooperation of 53 NGOs. MAFF, MoE, and other relevant ministries participated in this event. 4 sectors including human rights, natural resources, EIA, sustainable development and Green Growth Development (GGD) were discussed at the event
– Human Rights day “rights to express ideas and access to information” was organized, achieving everything we had planned in the agenda. NGOF Annual program reflection meeting took place, where the action plan and budget plan for 2017 were developed.
– In the meeting with US government representatives on environment and development – lawyers joined to talk about environment rights
– Meeting with 3rd commission of National Assembly (NA) was held on 19th January 2017. As a result, NA and NGOs have actioned a joint study tour in Tonle Sap area.
– On 20th January 2017, there was a meeting with MoE, resulting in NGOs and MoE organising a meeting with Prime Minister Hun Sen in 2017 to check what has been achieved from the discussion on 22 August 2016, and what needs future work.
– Inputs for the Mid-term review of NSDP 2014-2018 were collected and a joint statement was developed to send to government
– Meeting with network members of NGOF on each sector and other relevant meetings/events that NGOF have attended both in and out of the country until now.

Mr. Napoleon Navarro, Senior Policy Advisor, UNDP mentioned that NGOF is very active in the conversation on agenda 2030 in Cambodia. UNDP is looking at 3 key questions below, but he talked only on the first and the second point. Generally, Cambodia has responded well to integrating SDGs’ agenda into the national action plan which is about 78%. The main points that UNDP look at in this rapid assessment are planning, budgeting, and monitoring of the set target indicators. However, it was observed that there are some Gaps on “leaving no one behind” which only show about 7%. We would recommend that Cambodia puts more consideration into the poor, vulnerable and disabled people receiving social service and protection from HIV, disasters, infrastructure development, waste management, GGD, level of participation, etc.

H.E. Vuthy Vannara, Deputy Director of General Secretary of MLMUPC, results show that 63.6% of the targeted plan of 7 million land heads were registered. We have altered the system of working on land registration to be faster to meet the citizens’ needs, cutting the days needed to register land in half. For example, instead of 30 or 10 days, we now only need 15 or 5 days to work on land registration.

Mr. Ouk Vannara, Deputy Executive Director of the NGO Forum on Cambodia gave instruction on the election of New Management Committee’s members (to replace Ms Prum Bopha and Mr. Yin Dara). Then, Dr. Tek Vannara, ED of NGOF congratulated Mr. Norng Sivotha and Ms. Prom Bopha on becoming the new MC members of NGOF. He also deeply thanked Ms. Prom Bopha for the first mandate and her continuation for the next mandate as MC of NGOF and gave a gift and flowers for her active involvement and commitment to support NGOF.

Ms. Prum Bopha summarized that as a result of this meeting, participants have learned about and understood the progress of the public financial management reform program (PFMRP), SDGs localization, JMIs development process, organized by the government to get input from CSOs and relevant stakeholders, and the progress of each TWG on land, forestry, agriculture and water. Finally, she thanked all meeting participants, wished them all success in life, and then announced the close of this meeting. 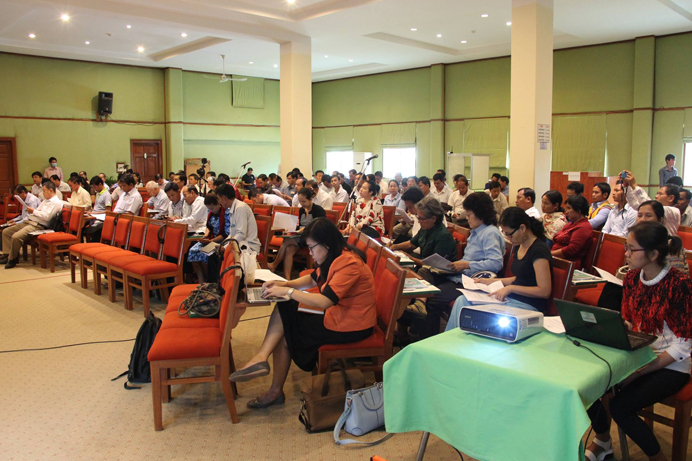