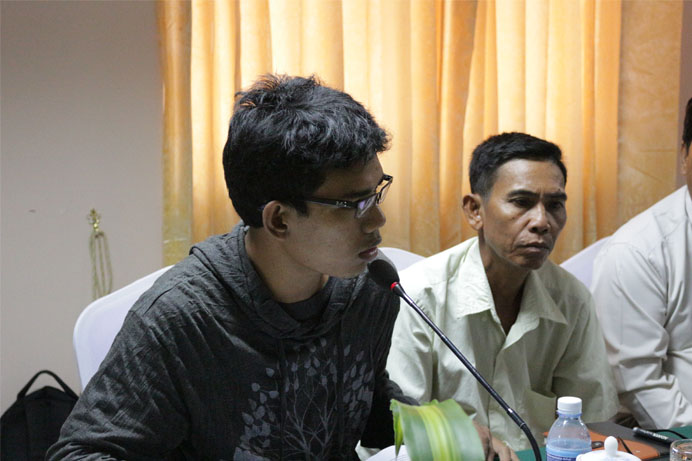 As part of their patrol routine, from 23 to 27 March activists from all four provinces traveled through Prey Lang patrol to monitor and suppress the illegal logging that is destroying Prey Lang forest. During the five days of patrol their confiscated many cubic meters of wood, 35 chainsaws, and other materials involved in logging activities. Over the past 2 months of 2016 they have confiscated 85 chainsaws and many more cubic of wood from illegal loggers in Prey Lang.

On the evening of 26 March they camped overnight near Ta Chuel stream, in the Bueng Char region. On 27 March, between 1.30 and 1.40 in the morning, local time, a group of people slipped through their camp and attempted to kill one of youth activists, Phan Sopheak, who was asleep in her hammock. They did not see the faces and do not know how many they were, but activist was badly injured on her left leg. If she were sleeping the other way, they would have cut her throat. The criminal soon escaped after Sopheak yelled for help. This was clearly an act of attempted murder, with malice toward her and the rest of the activists. Sopheak is one of the young Prey Lang activists who were nominated to represent PLCN to receive an Equator Prize from UNDP in December 2015 in Paris. Sopheak was sent to a local clinic for quick treatment on the same day and is now safe, but her left leg is seriously injured.

PLCN is in shock and are very concerned for their safety amid increased intimidation and threats on our lives like this attempted murder by illegal loggers and those supporting them. Meanwhile the level of deforestation in Prey Lang had increased dramatically since early 2016. Without support from the Cambodia government, Prey Lang will cease to exist and our livelihood will disappear. Therefore, they request the following to the Cambodia government:
1.    Fully investigate the attempted murder on Sopheak and bring those criminals to justice.
2.    Permanently criminalized all forms of timber trading, both legal and illegal, in the Prey Lang region.
3.    Stop all logging activities in the Prey Lang region.
4.    Conduct Investigations to determine who is involved in the logging business.
5.    Help to intervene and cooperate with PLCN to protect Prey Lang.